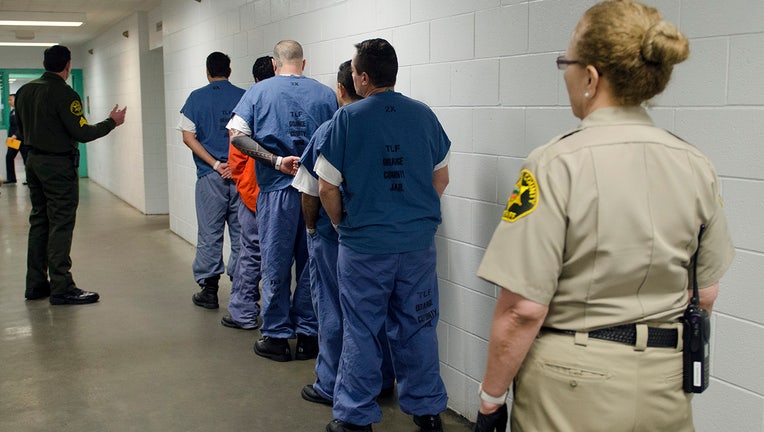 Detainees are escorted down a hall in at the Theo Lacy Facility in Orange, California, on Tuesday, March 14, 2017. (Jeff Gritchen/Digital First Media/Orange County Register via Getty Images)

SANTA ANA, Calif. - (CNS) - A federal class-action lawsuit refiled today on behalf of Orange County jail inmates alleges a number of abuses, including the improper monitoring of inmate-attorney phone calls, the use of disciplinary isolation and claims that two pregnant women in labor were ignored and later lost their babies.

U.S. District Judge James Selna had indicated he would only allow some of the claims made in a similar lawsuit filed earlier this year to continue.

Sheriff's officials did not immediately respond to a request for comment on the amended complaint filed Monday.

Sandra Quinones, who is among the plaintiffs, alleges that she had been in custody in the Orange County jail for six months on March 28, 2016, when her "water broke and she pushed the call button in her cell with no response for two hours."

An ambulance was never called, and when deputies drove her to a hospital, they stopped for a coffee at Starbucks, the lawsuit alleges.

"Plaintiff Quinones and her baby were hospitalized and her baby then died," the lawsuit alleges. "Defendants failed to provide immediately necessary medical care resulting in the death of baby Quinones."

Another plaintiff, Ciera Stoetling, was in the county jail on May 12, 2018, when she gave birth to her baby, who died while the woman was in custody.

Stoetling "had informed defendants she was pregnant and had been on 'pregnant' status in the jail," according to the lawsuit, which says that she advised the jail nurse that she was having contractions on May 11, 2018.

"At one point the emergency button in her cell was pressed and jail staff was informed of her contractions, but she received no response to her request for assistance. The emergency button was then pressed again for the second time due to plaintiff being in more pain," the suit says. "Eventually, the jail nurse refused to take her to the hospital because of lack of staff. She was then taken to the jail infirmary and told to drink eight cups of water a day. This was on a Saturday morning, (and) staff informed (the inmate) she would be seen by a doctor on Monday."

Another woman, whose name was not released, was also denied immediate medical care when she was in the jail July 27 of this year and her newborn died, according to the lawsuit.

The Orange County District Attorney's Office in June concluded there was no wrongdoing involving the death of Stoetling's baby. In their report, which identified the mother only as Ciera S., prosecutors noted that the inmate, who had been arrested on suspicion of drug-related allegations, had told police she had been smoking methamphetamine while 23 weeks pregnant.

The mother also told authorities during a prenatal evaluation that she was daily smoking marijuana, according to the report prepared by Deputy District Attorney Craig Williams.

The inmate pressed an emergency button in her cell on May 12, 2018, because of stomach cramps and vaginal bleeding. It was determined later she had a severe infection, and when she tried to relieve cramping and pain with a bowel movement, she started delivering the baby, Williams said. She knocked on a nurse's door saying, "I am having the baby," according to the prosecutor.

Paramedics were summoned and the baby was pronounced dead. An autopsy showed the miscarriage was due to "intra-uterine demise associated with placental infraction and chorioamnionitis," and that the death was natural, according to the report.

The lawsuit alleges that one plaintiff has been in disciplinary isolation for five years, and another, Jonathan Tieu, who was among a group who escaped from the jail in January 2016, was locked down for all but an hour a day until recently.

Other high-profile inmates named in the lawsuit include Johnny Martinez, who some authorities speculate is the new leader of the Orange County branch of the Mexican Mafia in the wake of Peter Ojeda's death, and Joshua Warning, the son of a former "Real Housewives of Orange County" cast member.

Martinez alleges that he is being denied access to religious services. When he was offered personal counseling it was from a sheriff's deputy who is also a minister, and he felt "uncomfortable" doing confession with a law enforcement officer, his attorney Richard Herman said.

Martinez, who led a hunger strike in the jail, is charged with several others in a gang-related attack on one man in Placentia and the murder of another man for allegedly not paying "taxes" to the gang on drug sales.

Waring complains in the lawsuit that he is also being denied access to religious services. He also alleges that after making complaints, he was redesignated from a high-profile inmate vulnerable to attacks in the jail and thrown in a cell with gang members so he would be attacked.

Waring, who is facing trial on attempted murder charges in Costa Mesa, also was thrown in a "rubber room" naked and denied access to medication for seizures, according to the lawsuit, which alleges he was also attacked by sheriff's deputies with pepper balls as retaliation for complaints he made while in custody.

Herman said that this week, he will seek a temporary restraining order granting more access to religious services for inmates.

The lawsuit also alleges that sheriff's officials were taking complaints and characterizing them as "requests" instead of "grievances," so they would not have to go through a legal process of addressing them.

Attorneys Stephen Bartol, Walter Cole and Ronald MacGregor are  named as plaintiffs in the lawsuit, which alleges that the sheriff's contractor that handled inmates' calls to their lawyers recorded thousands of those calls and allowed law enforcement to monitor some of them. The lawsuit alleges the sheriff's department should have been aware of the breach of attorney-client privilege and was negligent.

"The number of such calls is currently unknown -- (the sheriff's department) at one point claimed the number of calls was 58; that number was later changed to 347. On information and belief, OCSD excludes many calls in reaching those figures, and the number of calls actually listened to by OCSD personnel was far higher, numbering in the hundreds of thousands," the lawsuit alleges.