WASHINGTON - The U.S. Food and Drug Administration issued an "import alert" on all alcohol-based hand sanitizers from Mexico after the agency found that 84% of sampled products were not in compliance with safety regulations — and more than half were found to contain poisonous ingredients. Several deaths have been tied to some of the products.

From April through December 2020, the agency collected 112 samples of alcohol-based hand sanitizer products imported from Mexico. Of these products, 94 (84%) were not in compliance with the FDA’s safety standards — and 74 of the samples contained the presence of methanol and/or 1-propanol at dangerous levels.

"This presents serious safety concerns," the FDA said in a notice posted this week. The agency cited at least 20 recent deaths associated with hand sanitizers, 16 of which involved methanol poisoning. Furthermore, the FDA said seven of these cases were directly linked to methanol-contaminated hand sanitizers manufactured in Mexico.

Methanol, or wood alcohol, is a substance that can be toxic when absorbed through the skin and life-threatening when ingested.

Exposure to it can cause nausea, vomiting, headaches and blurred vision. The FDA noted that even more adverse effects have included "blindness, cardiac effects, effects on the central nervous system and hospitalizations and death," primarily reported to poison control centers and state departments of health.

"Although people using these products on their hands are at risk for methanol poisoning, young children who ingest these products and adolescents and adults who drink these products as an alcohol substitute are most at risk," the agency said in a statement. 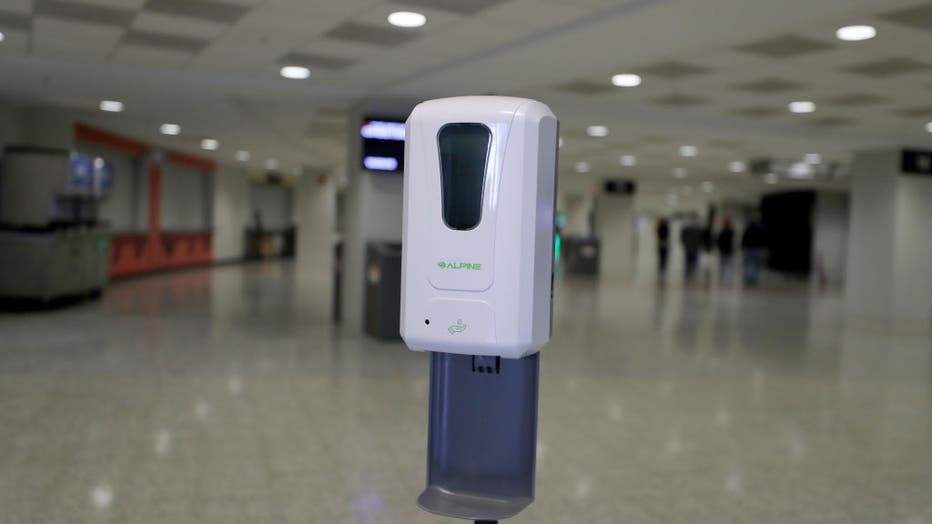 FILE - Hand sanitizer is seen on the concourse at the Prudential Center on Jan. 16, 2021 in Newark, New Jersey. (Photo by Elsa/Getty Images)

The FDA keeps an updated list of hand sanitizers consumers should avoid. In most cases, methanol did not appear as an ingredient on the product label.

As a result of these findings, the FDA issued an import alert to prevent dangerous hand sanitizer products from entering the United States. An import alert means the agency will automatically detain products at the border until it can review its safety.

The FDA’s findings come as the ongoing coronavirus pandemic has prompted a surge in the usage of hand sanitizer over the past year. Data compiled this month by the American Association of Poison Control Centers shows a spike in accidental poisonings, most involving small children.

There were 938 hand sanitizer exposure cases reported across the U.S. during the first 10 days of 2021, a 57% increase from the same time period a year ago, data shows. Nearly 600 of those cases involved children age 5 or younger.

No deaths were reported.

A majority of the cases’ outcomes were not followed, citing "minimal clinical effects possible." Another 32% of cases either had "no effect" or a "minor effect." The hand sanitizer exposure was found to have a "moderate effect" in 3% of the reported cases during this timeframe.

Still, experts say its important to be aware of hand sanitizer products being used in the household. According to the American Association of Poison Control Centers, which tracks poison cases reported to the 55 U.S. Poison Control Centers, methanol has a long history of severe toxicity. The chemical even led to the term "blind drunk" because of its potential to damage the optic nerve.

"There have been historical outbreaks of poisoning both from ingesting methanol but most importantly from topical administration of substances containing methanol," the AAPCC said in a statement. "This is especially concerning for children as they have a much higher surface area to weight ratio and are more likely to become sick from a topically applied poison than adults."