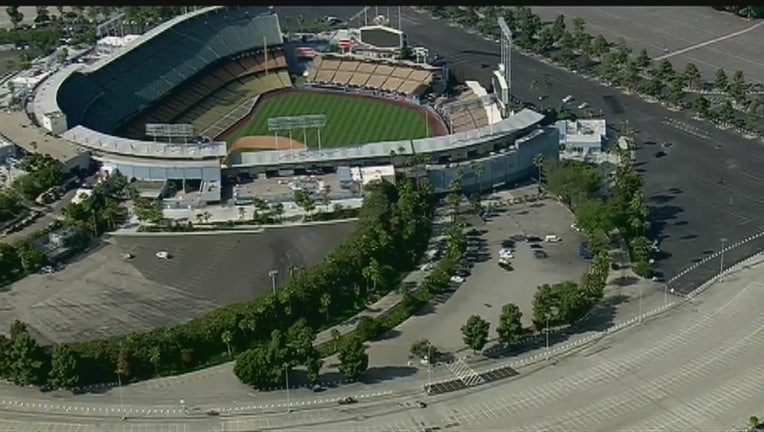 LOS ANGELES - A Dodgers fan who was hospitalized with a serious brain injury after being attacked in one of the stadium parking lots after a 2019 home game is suing the team, alleging the lighting was poor and security was lacking.

"Mr. Reyna will live with the memory and physical scars of this tragedy for the rest of his natural-born life,'' plaintiff's attorney Carl Douglas said. "Not only did he suffer a traumatic brain injury when his head bounced off the asphalt of the Dodger Stadium parking lot, but he spent several days in a medically induced coma, where his very life hung in the balance. His wife knows he has months, if not years of physical therapy lying ahead.''

The 48-year-old Reyna, then of Eastvale in Riverside County, was on the phone with his wife and she heard him being assaulted and his head hitting the ground, according to the suit filed Thursday. She also detected his labored breathing and groans and stayed on the phone until he got assistance, the suit says.

Brian Kealey, the Dodgers' security manager, is also named as a defendant in the lawsuit, which seeks unspecified damages.

A representative of the team declined comment on the suit.

Girardi & Keese, one of two law firms representing Reyna, won a multimillion-dollar verdict in 2014 for San Francisco Giants fan Bryan Stow of Capitola, who suffered a permanent brain injury in a March 31, 2011, beating in a Dodger Stadium parking lot.

The Reynas' attorneys believe the crime rate at Dodger Stadium exceeds that of any other ballpark in Major League Baseball, according to the filing. Security was reduced in 2004 for financial reasons, possibly due to the financial troubles of former owner Frank McCourt, and in 2008, the Dodgers
began relying solely on security guards uniformed in polo shirts, without any uniformed Los Angeles police officers, the suit alleges.

"The lack of LAPD-uniformed security personnel diminished the safety and security of Dodger Stadium by creating a more relaxed atmosphere without the threat of immediate police intervention,'' emboldening wrongdoers at the stadium, the suit alleges.

Reyna was attacked after watching the Dodgers play the Arizona Diamondbacks on March 29, 2019, the suit states. The game lasted 13 innings and ended shortly before midnight, according to the complaint.

After the game, Reyna went to one of the parking lots to reach his car and called his wife to let her know he would soon be departing Dodger Stadium, but he was overtaken by about five people and violently beaten, causing him to collapse onto the parking lot asphalt and strike his head, the
suit states.

The attack was not witnessed by any security guards and the area was "notoriously poorly lit,'' the suit alleges.

Dodgers personnel took 10 minutes to locate Reyna and even longer to get him emergency treatment, the suit alleges.

The team knew about "numerous prior similar incidents at Dodger Stadium'' that occurred in part because of the lack of security, including uniformed LAPD officers, the suit alleges.

Reyna's wife issued a statement saying well-wishers' "kind words and encouragement have provided us the strength to continue to push ourselves through this difficult healing process.''

"Along with our children, we continue to work to create our new normal since the injury occurred with Rafael,'' she said.