SHARM el-SHEIKH, Egypt (AP) - The decision Sunday by nations around the world to establish a fund to help poor countries hit hard by a warming planet was one of the most significant since U.N. climate talks began 30 years ago.

It was an unequivocal confirmation that poor countries, with limited resources, are being most impacted by extreme weather events like floods, heat waves and storms and, at least at some level, industrialized nations that have done the most to contribute to climate change have a responsibility to help.

While government leaders, environmentalists and activists celebrated plans for such a fund, there are many outstanding questions, ranging from how it will work to long-term repercussions. Here is a look at the development of the idea of "loss and damage," the term it’s given in climate negotiations, and what we know about the fund.

In the early 1990s, the Alliance of Small Island States, a group of low-lying coastal and small island countries, began calling for the establishment of a loss and damage fund as the United Nations was creating a framework to deal with climate change on an international level.

Since then, the idea has always been a part of annual U.N. climate summits. However, it was often talked about on the margins of negotiations, something developing nations and activists would push for while many rich nations used their weight to squash the idea. For the first time, at this year’s COP27 it was included in the agenda and became the centerpiece of discussions.

Who will fund it?

The fund will initially draw on contributions from developed countries and other private and public sources, such as international financial institutions, with an option for other major economies to join down the line.

The final text points to "identifying and expanding sources of funding," something the EU, the U.S. and others had pushed for during negotiations, suggesting that nations that are both high-polluting and considered developing under the criteria, should also pay into the fund.

During the talks, China said money for the new fund should come from developed countries, not them. But there’s precedence for China to voluntarily pay into climate funds, if the U.S. does too.

When the Obama administration pledged $3 billion to the Green Climate Fund in 2014, China also paid $3.1 billion for the fund.

More details of who pays will be decided by a committee that plans to get the fund going within a year.

Who will get money?

The deal says the fund will assist "developing countries that are particularly vulnerable to the adverse effects of climate change," though there will be room for middle-income countries that are severely affected by climate disasters to also get paid.

Pakistan, which was devastated by flooding that put a third of the country underwater, or Cuba, recently battered by Hurricane Ian, could be eligible.

How the loss and damage fund will fit in with "other institutions, agencies that are out there doing humanitarian work, helping people rebuild, dealing with migration and refugee crises, dealing with food security, water security" will need to be worked out, said David Waskow, the World Resources Institute international climate director.

Those details will also be hammered out by the committee in the coming year.

Beyond just financial help, setting up the fund is seen as a huge step forward, but how it's ultimately viewed will depend in part on how fast it can be set up.

In the closing session Sunday, Antigua's Lia Nicholson said the transitional committee should be set up immediately and given clear mandates.

"This loss and damage fund must become the lifeboat that we need it to be," she said.

There is a credibility gap because of past broken promises.

In 2009, rich nations agreed to provide $100 billion a year to help developing countries transition to green energy systems and adapt to climate change. However, to date, that initiative has never been fully funded.

One of the main reasons that rich nations long opposed such a loss and damage fund was the fear that it would open then up to long-term liability. Despite passage, that concern is very much still at play, as evidence by how negotiators made sure the language of the fund didn’t say "liability" and that contributions were voluntary.

Despite those caveats, the establishment of such a fund could have repercussions, both legal and symbolic, in climate circles and beyond. For example, several Pacific Island nations have been pushing for the International Court of Justice to consider climate change. They argue that international laws must be strengthened to protect their rights in the case that their lands are engulfed by rising seas. The establishment of a loss and damage fund could bolster those arguments. 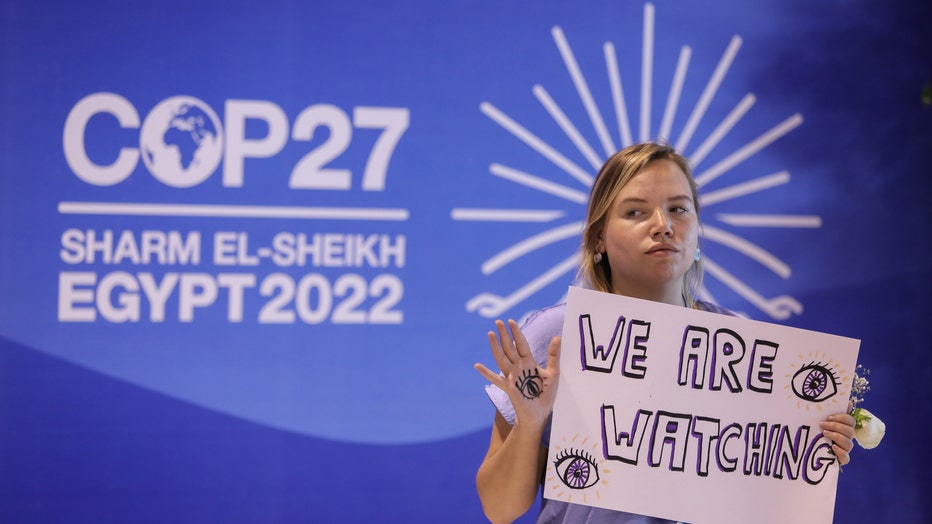 A climate activist takes part in the demonstration in front of International Convention Center to protest the negative effects of climate change, as the UN climate summit COP27 continues in Sharm el-Sheikh, Egypt on November 19, 2022. (Photo by Moham