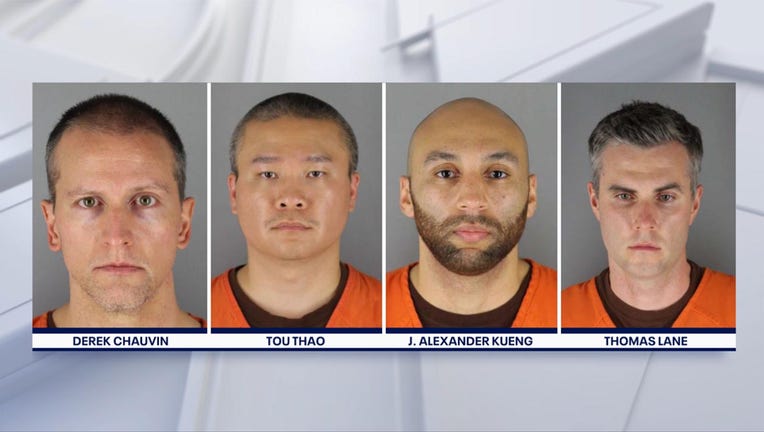 MINNEAPOLIS (AP) - Four former Minneapolis police officers charged with violating George Floyd’s civil rights are scheduled to be arraigned in federal court Tuesday at a hearing that could also address some pretrial motions.

A federal grand jury indicted Derek Chauvin, Thomas Lane, J. Kueng and Tou Thao in May for allegedly depriving Floyd of his rights while acting under government authority on May 25, 2020, as Floyd, 46, was held face-down, handcuffed and not resisting in a restraint that was captured on bystander video. His death led to worldwide protests and calls for change in policing.

At federal arraignment hearings, defendants can have the charges read to them, and not guilty pleas are typically entered. The parties were to appear at Tuesday’s hearing via videoconference.

Local residents react to the Derek Chauvin sentencing. The ex-Minneapolis police officer was sentenced to about 22.5 years in prison for the murder of George Floyd.

Prosecutors and attorneys for the former officers could also argue several motions on Tuesday.

Among them, Kueng and Thao have asked that their federal trials be separated from Chauvin’s, saying they would be unfairly prejudiced if they went to trial alongside him. Lane asked to join that request, which is being opposed by prosecutors. It wasn’t immediately clear if that issue will come up at Tuesday’s hearing, because both sides have agreed the request was premature and have asked to set it aside until more information develops, according to court documents.

During Floyd’s arrest, he repeatedly said he couldn’t breathe as Chauvin pinned him to the ground. Kueng and Lane helped restrain Floyd; Kueng knelt on Floyd’s back, and Lane held Floyd’s legs, according to evidence in state court. Thao held back bystanders and kept them from intervening during the 9 1/2-minute restraint.

The four officers were also charged in state court, where Chauvin’s trial was eventually separated from the others due to space restrictions during the COVID-19 pandemic. Chauvin was convicted in April of murder and manslaughter and was sentenced to 22 1/2 years in prison. The other three former officers face state trial next March on aiding and abetting counts.

Chauvin is also charged in a separate federal indictment alleging he violated the civil rights of a 14-year-old boy in 2017.

Meanwhile, the federal government is investigating policing practices in Minneapolis. The investigation known as a "pattern or practice" — examining whether there is a pattern or practice of unconstitutional or unlawful policing — includes a sweeping review of the entire police department. It may result in major changes to policing in the Minnesota city.