The winds have calmed down helping out firefighters battling two major wildfires in Orange County. The Blue Ridge Fire in the Yorba Linda - Chino Hills area -- is now 16-percent contained.

YORBA LINDA, Calif. - All evacuation orders and warnings have been lifted as firefighter get the upper hand in containing the Blue Ridge Fire that is burning in Yorba Linda.

Evacuation orders have been lifted for Yorba Linda residents.

The blaze ignited on Oct. 26 on the west end of Corona in Riverside County quickly spread into Orange County.

The large blaze is threatened homes in Yorba Linda and Chino Hills. At one point, the Orange County Fire Authority said residents in nearly 8,500 homes were evacuated and at least 7 structures have been damaged and one destroyed.

Officials said all evacuation orders and warnings related to the Blue Ridge Fire have been lifted as of Oct. 29. Residents are now allowed to return home.

A temporary evacuation center has been established at the Norman P. Murray Community and Senior Center located at 24932 Veterans Way in Mission Viejo, the city of Mission Viejo announced.

A temporary evacuation center has been set up at Thomas Lasorda Jr. Field House 4701 Casa Loma Ave Yorba Linda and Brea Community Center which is located at 695 Madison Way Brea. Those with large animals can go to OC Animal Care Services at 1630 Victoria Road Tustin. 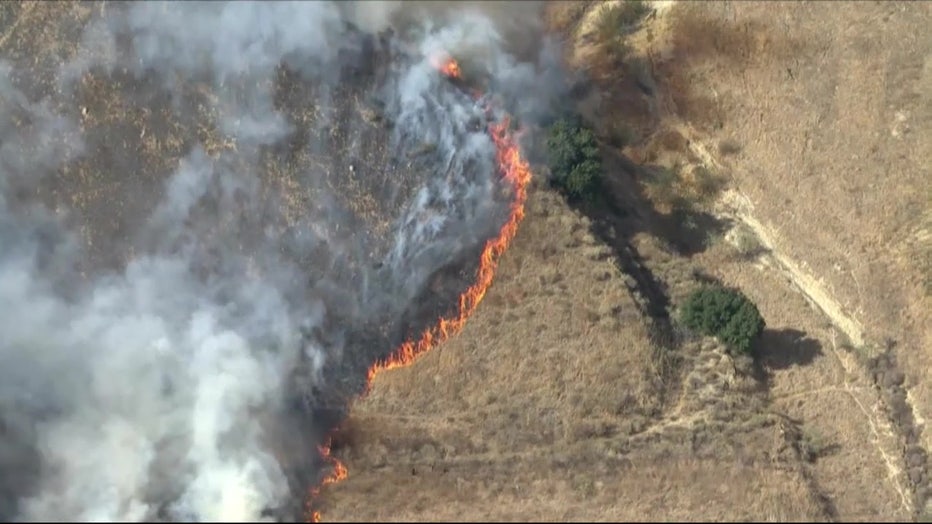 As of Oct. 30, no road closures were in effect.

Initially called the Green Fire and later renamed the Blue Ridge Fire, the blaze was reported at 12:55 p.m. on Oct. 26 adjacent to the Green River Golf Club, just off of Green River Road and the 91 Freeway, according to the Corona Fire Department.

The high winds grounded aircraft used to battle fires for most of the day, but by late this afternoon, a DC-10 was up in the air making airdrops in Yorba Linda, Fennessy said.

"But we're also told we can expect (winds) to increase in the early morning hours until they die off some time tomorrow afternoon," he said.

The head of the fire entered Orange County about 1:20 p.m., and the flames raced toward Yorba Linda, posing a threat to scores of residences.

A grant from the Federal Emergency Management Agency was secured Monday by Gov. Gavin Newsom, which will assist local and state agencies in responding to the fire to apply for 75% reimbursement of their eligible firefighting costs.

Orange County Board of Supervisors Chairwoman Michelle Steel signed anemergency declaration Tuesday and asked Newsom to sign one as well for thecounty to free up more funding.

There is no immediate word on the cause of the fire.