DeSantis spoke about rescue efforts after Hurricane Ian devastated parts of the state.

Dozens were confirmed dead Saturday as rescuers continue to search for survivors among the ruins of Florida's flooded homes from Hurricane Ian. Meanwhile, authorities in South Carolina were assessing damage from its strike there.

In central Florida, swollen rivers from Ian are expected to bring major to record flooding through next week. 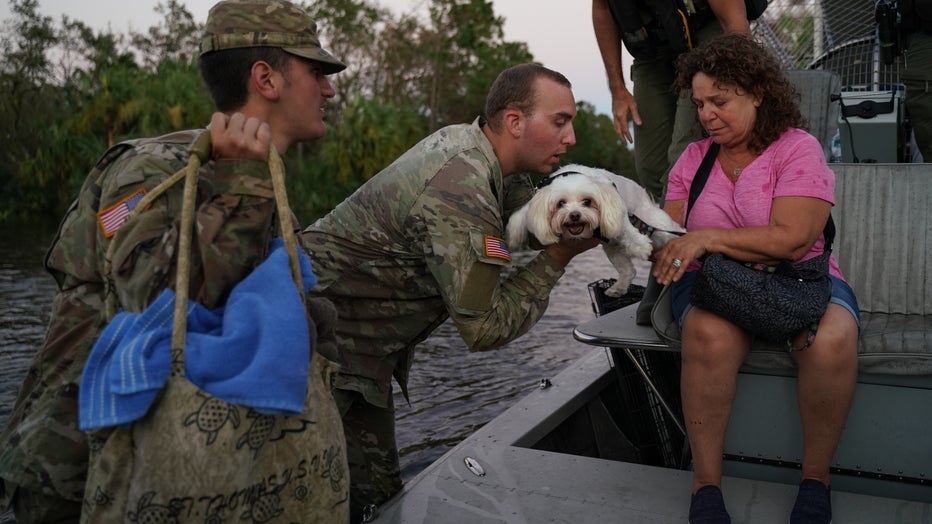 Florida utilities were working to restore power. As of Saturday night, nearly 1 million homes and businesses were still without electricity, down from a peak of 2.67 million.

The powerful storm terrorized millions of people for most of the week, battering western Cuba before raking across Florida from the warm waters of the Gulf of Mexico to the Atlantic Ocean, where it mustered enough strength for a final assault on South Carolina.

The sheriff of Lee County, Florida, where Hurricane Ian made landfall as a Category 4 storm, said Saturday that the death toll in his county alone is now at 35.

Authorities have confirmed at least 47 people in Florida died, mostly from drowning but others from the storm's tragic aftereffects. Four others died in North Carolina and three were killed in Cuba.

A 68-year-old woman was swept into the ocean by a wave and a 67-year-old man fell into rising water inside his home while awaiting rescue. An elderly couple died after their oxygen machines shut off when they lost power, authorities said.

A 22-year-old woman died after an ATV rollover from a road washout and a 71-year-old man suffered a fatal fall from a rooftop while putting up rain shutters. Another three people died in Cuba earlier in the week.

Searches were aimed at emergency rescues and initial assessments, Florida Division of Emergency Management Director Kevin Guthrie said. He described one submerged home as an example.

"The water was up over the rooftop, right, but we had a Coast Guard rescue swimmer swim down into it and he could identify that it appeared to be human remains. We do not know exactly how many," Guthrie said.

In South Carolina, Ian's center came ashore near Georgetown, a small community along the Winyah Bay about 60 miles (95 kilometers) north of historic Charleston.

South Carolina's Pawleys Island, a beach community about 73 miles (117 kilometers) up the coast from Charleston, was among the places hardest hit by Ian, and power remained knocked out to at least half of the island Saturday.

Eddie Wilder, who has been coming to Pawleys Island for more than six decades, said Friday’s storm was "insane to watch." He said waves as high as 25 feet (7.6 meters) washed away the pier — an iconic landmark — just two doors down from his home.

"We watched it hit the pier and saw the pier disappear," said Wilder, whose house sits about 30 feet (9 meters) above the ocean and stayed dry inside. "We watched it crumble and and watched it float by with an American flag still floating."

The Pawleys pier was one of at least four along South Carolina’s coast to be destroyed during Ian’s winds and rain. Portions of the pier, including barnacle-covered pylons, littered the beach. The intracoastal waterway was littered with the remnants of several boat houses torn apart and knocked off their pilings in the storm. 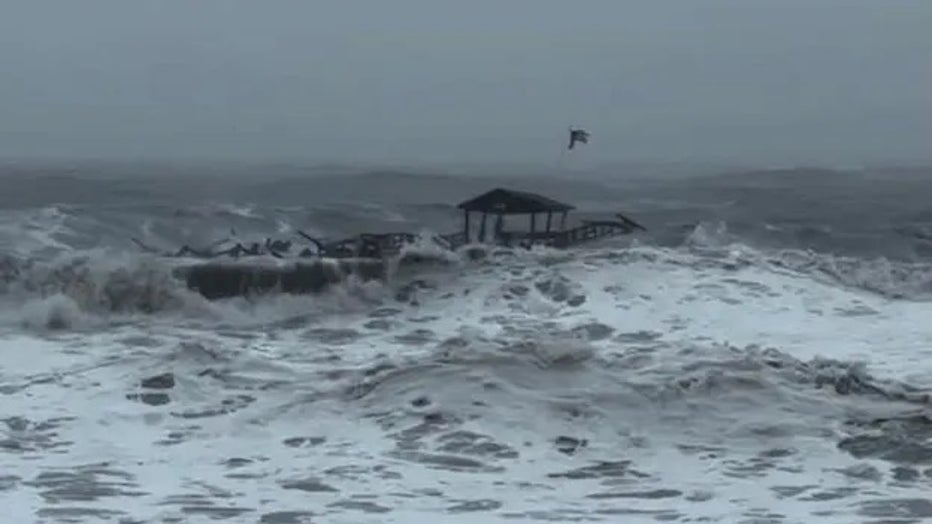 Traffic was shut off to Pawleys Island's southernmost point, where crews were working to clear roadways of sand and other debris that officials said has been piled at least a foot high. The sand will later be redistributed to build back the dunes along the beach front, as happened after similar washing over in 2019.

Many of the elevated beach homes still had feet of sand underneath, with dunes completely washed over and nearly flattened.

John Joseph, whose father built the family’s beige beach house in 1962, said Saturday that he was elated to return from Georgetown -- which took a direct hit — to find his Pawleys Island home entirely intact.

"Thank God these walls are still here, and we feel very blessed that this is the worst thing," he said of the sand swept under his home. "What happened in Florida — gosh, God bless us. If we’d had a Category 4, I wouldn’t be here."

In North Carolina, the storm appeared to have mainly downed trees and power lines, leaving over 280,000 people across the state without power late Saturday morning, according to state officials.

At least one fatality connected to the storm was reported in Johnston County, outside of Raleigh. A woman found her husband dead early Saturday after he went to check on a generator running in their garage overnight, sheriff’s office Capt. Jeff Caldwell said.

The storm's winds were much weaker Friday than during Ian's landfall on Florida's Gulf Coast earlier in the week.

Ian among costliest storms in US history

Video from the Coast Guard shows what it takes to rescue those stranded in Sanibel by Hurricane Ian.

Even though Ian has long passed over Florida, new problems continued to arise. A 14-mile (22-kilometer) stretch of Interstate 75 was closed late Friday in both directions in the Port Charlotte area because of the massive mount of water swelling the Myakka River.

Ross Giarratana, a meteorologist at the National Weather Service in Tampa, said the Myakka was cresting at a record 12.73 feet (3.88 meters) Saturday morning.

Further southeast, the Peace River was also at a major flood stage early Saturday in Polk, Hardee and DeSoto counties. The majority of those points have not yet crested, Giarratana said.

"It was crazy to look at just how quickly the rivers were rising,’’ he said. "We knew that we were in for some record stuff."

A door to a condominium in Naples, Florida, buckled from the storm surge as Hurricane Ian neared the city on Wednesday, September 28. Credit: @comfygoat via Storyful

Hurricane Ian has likely caused "well over $100 billion’’ in damage, including $63 billion in privately insured losses, according to the disaster modeling firm Karen Clark & Co., which regularly issues flash catastrophe estimates. If those numbers are borne out, that would make Ian at least the fourth costliest hurricane in U.S. history.

RELATED: How to apply for FEMA assistance: 13 Florida counties qualify for aid after Hurricane Ian

Authorities and volunteers there were still assessing the damage as shocked residents tried to make sense of what they just lived through.

Anthony Rivera, 25, said he had to climb through the window of his first floor apartment during the storm to carry his grandmother and girlfriend to the second floor. As they hurried to escape the rising water, the storm surge had washed a boat right up next to his apartment.

"That's the scariest thing in the world because I can't stop no boat," he said. "I'm not Superman."

On Saturday, a long line of people waited outside an O’Reilly’s auto parts store in Port Charlotte, where a sign read, "We have generators now." Hundreds of cars were lined up outside a Wawa gas station, and some people walked, carrying gas cans to their nearby cars.