"She was elegant," said Jarrín. "She was everything to Vin. His rock."

The Los Angeles Dodgers announced Sandra Scully, Vin's wife of 47 years, passed away on Sunday after her battle with ALS. 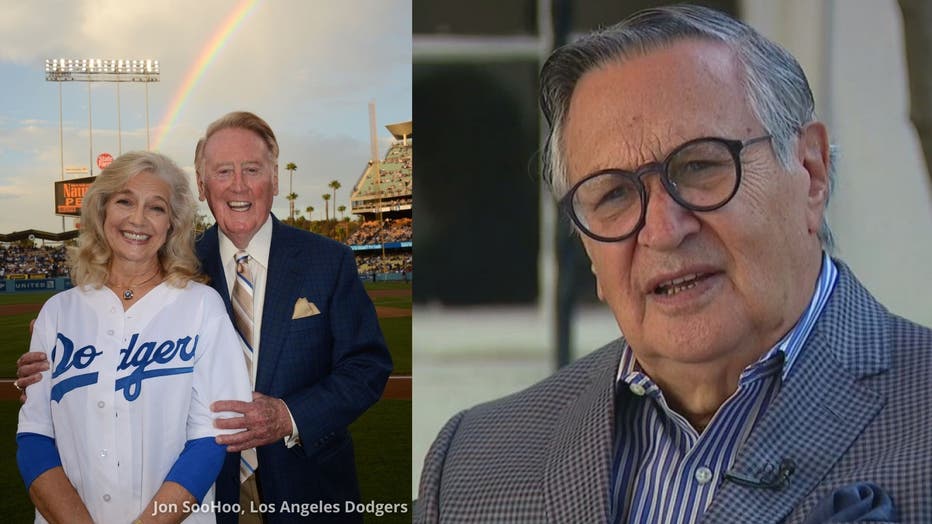 At Jarrín's home 10 miles from the stadium, the legendary Spanish voice of the Dodgers told FOX 11's Laura Diaz that he will miss Sandra. Jarrín described Sandra as an avid reader, always smiling "beautiful inside and out."

If Vin Scully’s calling of Dodger games, was the soundtrack of summer— then today the song playing on the speaker would most certainly be a sweet love song; dedicated to the woman Vin Scully loved, protected and admired.

The Scullys and Jarríns were close friends. In the post season, their wives would join the Dodger road trips.

Now both women are gone. When Blanca died about two years ago, Vin Scully called Jaime to help him get through the grieving process.

As of now, Vin Scully is not up to receiving calls. But when he is, Jaime will be on the phone to speak with Vin.

Jaime said, "I wish my English were better, to express what’s in my heart."

"They were a great couple, Vin and Sandi, Sandi and Vin."

Jarrín told FOX 11 that Vin often walked outside of the booth and called his wife during the third inning.

How did Jarrin know?

Vin Scully was smiling ear to ear speaking to his bride on the phone.