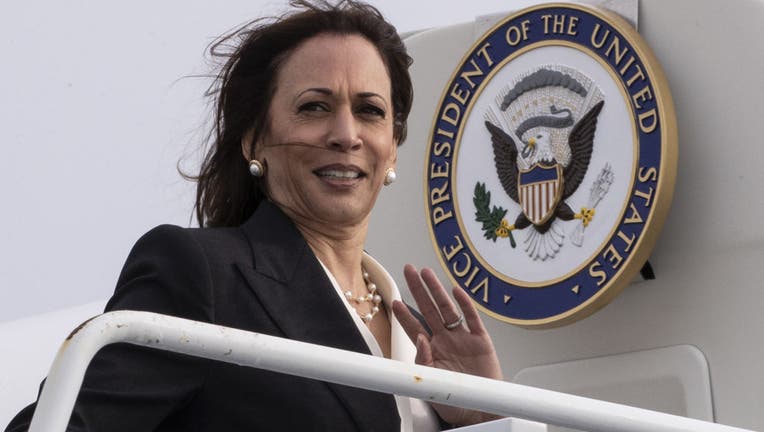 LOS ANGELES - Vice President Kamala Harris is at her home in Brentwood Tuesday, one day after speaking for 19 minutes at a Democratic National Committee fundraiser that raised $1 million.

Filmmakers JJ Abrams and Reggie Hudlin and television producer Ryan Murphy were among about 30 people who attended the fundraiser Monday night at the Brentwood home of Dana Walden, the chairman of entertainment for Walt Disney Television, and her husband Matt, who said $1 million was raised.

Harris began her speech by discussing the Biden administration's focus on pay equity, highlighting the specific needs of women in the workforce over the course of the coronavirus pandemic, attempts to reduce the cost of child care and support for abortion rights.

Harris acknowledged the economic hardships Americans are dealing with.

"Yeah it costs more money at the pump, and we need to deal with that," Harris said. "We need to acknowledge but we also need to keep with our program around making it easier to get by day-to-day which means again, going back to the child care, which means bringing down the cost of living, which means looking at what we can do and should do in terms of an investment in affordable housing, what we should do in terms of bringing down the cost of prescription drugs."

Hallie Balch, the Republican National Committee's California director of communications, told City News Service: "Even Kamala Harris knows that Californians are being crushed by soaring prices, but instead of working toward a solution for bringing down the cost of the most expensive gasoline in the nation, she's at a swanky fundraiser for Democrats. Harris should try fighting for Californians for once instead of wining and dining with some of the state's wealthiest residents."

Harris arrived at Los Angeles International Airport aboard Air Force 2 at 6:32 p.m. Monday, deplaned with her husband at 6:42 p.m. and left by motorcade at 6:45 p.m.

Harris and her husband will stay at their Brentwood home Tuesday and Wednesday. They have no additional public events in the Los Angeles area planned before she flies to San Francisco for a Black maternal health event Thursday.

Harris toured the operations center at Vandenberg Space Force Base on California's Central Coast earlier Monday, announcing that the United States commits not to conduct destructive, direct-ascent anti-satellite missile testing, and seeks to establish this as a new international norm for responsible behavior in space.

She also called on other nations to make similar commitments and to work together in establishing this as a norm, making the case that such efforts benefit all nations.