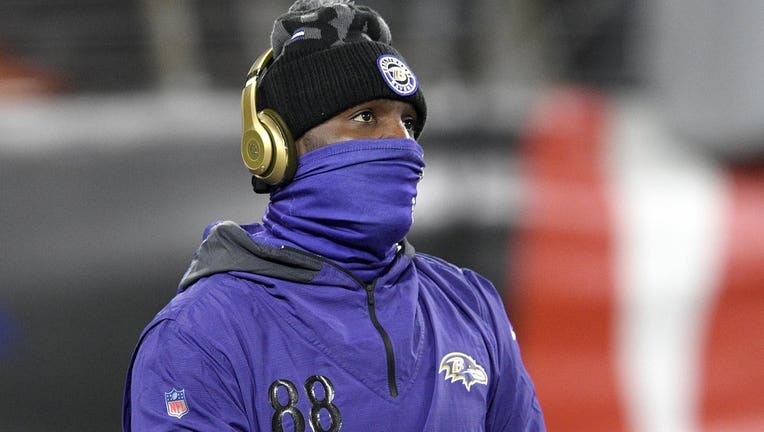 Baltimore Ravens wide receiver Dez Bryant adjusts his face covering while working out prior to an NFL football game against the Dallas Cowboys, Tuesday, Dec. 8, 2020, in Baltimore. (AP Photo/Nick Wass)

DALLAS - Baltimore Ravens Wide Receiver Dez Bryant will not play against his former team after testing positive for COVID-19.

Bryant, a former Dallas Cowboy, tweeted that he was warming up for Tuesday’s Ravens vs. Cowboys game when he was pulled from the field just minutes before kickoff.

“Tell me why they pull me from warming up so I can go get tested,” he tweeted. “My s**t come back positive.”

Bryant had an inconclusive test Tuesday morning. A retest later in the day showed a positive result.

The 32-year-old played for the Cowboys for eight years before he was cut in 2018. He later joined Baltimore in October and said he was looking forward to facing his former team for the first time.

After being pulled from the game, Bryant took to Twitter again. He wrote: "Yea I’m going to go ahead and call it a quit for the rest of the season... I can’t deal with this."

The Ravens appeared to be past an outbreak of COVID-19 that caused 23 players to be placed on the reserve/COVID-19 list.

Quarterback Lamar Jackson was activated Monday, along with several other players.