A fire was brought under control after it damaged seating at the Mile High Stadium in Denver, Colorado, on March 24, firefighters said. (Credit: Nick Rothschild, Denver7 via Storyful)

DENVER - Firefighters extinguished a fire at Empower Field at Mile High, the home of the Denver Broncos, on Thursday afternoon.

Stadium officials said in a statement on Twitter that the fire occurred in a construction zone near the East Club Lounge. About 100 people were attending an event on the second level, but the stadium was otherwise empty.

Firefighters encountered heavy fire and smoke was found upon arrival at the stadium.

Footage from a news helicopter showed several firefighters using water hoses to extinguish the blaze, which sent a large plume of black smoke billowing out of the stadium near downtown Denver. The Denver Fire Department tweeted several photos showing large flames spreading through the seating area.

Capt. Greg Pixley, a spokesman for the fire department, said it appears the fire originated in the suite and spread to the seats, which are made of plastic.

"This type of plastic that the seats are composed of burns with not only significant ferocity ... but also produces a tremendous amount of black smoke," he said. 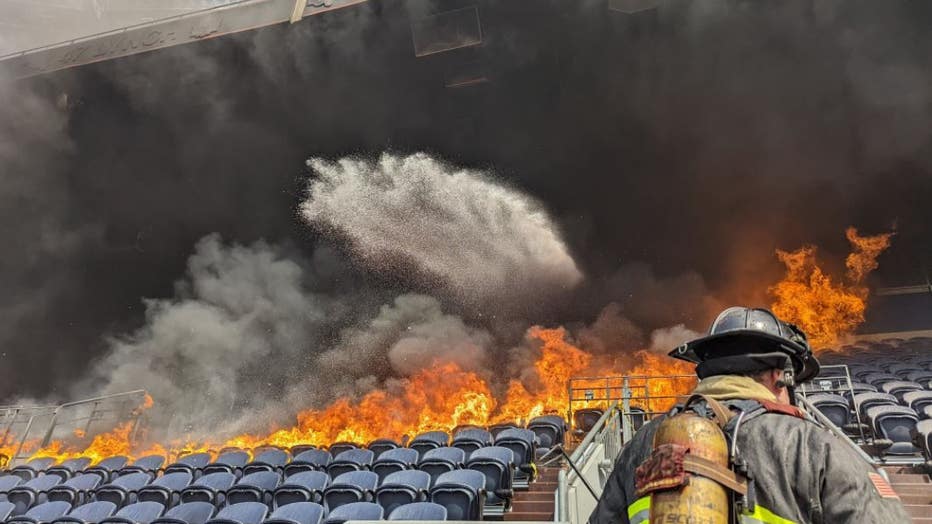 Investigators have not said what caused the fire, which burned at least 1,000 square feet (93 square meters).

A welder's torch was blamed for starting a similar fire that burned plastic seats in the west stands of the old Mile High Stadium in January 2002.

"Our firefighters have an experience with this type of fire fight. ... Any time that you have a fire on an upper level, you're going to have to move a great deal of equipment to that environment. So our firefighters brought a number of heavy pieces of hose and equipment, saws and the like, to be able to help them extinguish this fire," Pixley said Thursday.

The Associated Press and Storyful contributed to this story.  This story was reported from Washington, D.C.