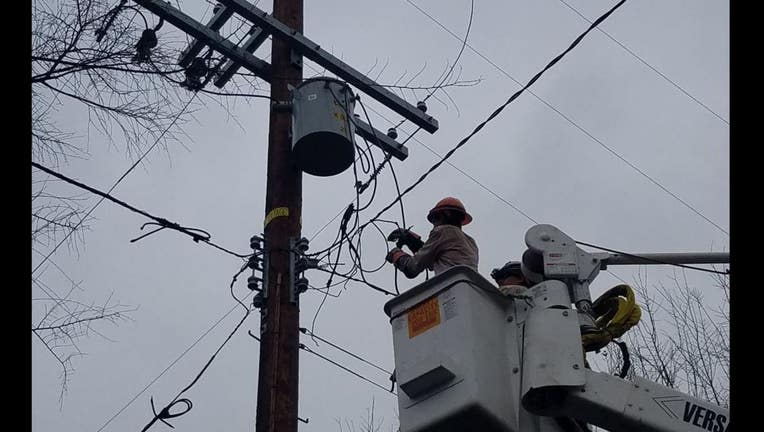 As of Monday morning there were still 1,500 customers without power from the storm that hit the Southland on Friday as crews continue to work.

At the peak of Friday's storm, more than 82,000 DWP customers were without power.

``Additional crews reported at 6 a.m. this morning and will work through the day and around the clock to get customers' power restored as quickly and safely as possible,'' DWP spokeswoman Kimberly Hughes told City News Service Sunday. ``It's all hands on deck.''

``With the high number of individual outage incidents and potential for continued rain, LADWP power system staff currently estimates restoration for most customers will take between 12 and 24 hours,'' Hughes said. Lingering
showers and thunderstorms in the area could slow progress.

The areas with the remaining highest number of outages included Sherman Oaks, East Hollywood, Harvard Heights and Glassell Park, she said at 2 p.m.

The most frequent causes of power outages during heavy rainstorms are downed trees, dried palm fronds, and branches from trees on both private and public property falling and making contact with power lines, Hughes said.

``This can result in extended outages as trees often need to be removed before our crews can begin restoration work,'' Hughes said.

The department added crews in advance of the latest storm systems, she said.

``LADWP urges all customers to use caution around downed or dangling power lines or poles,'' Hughes said.

Anyone seeing a downed wire should always assume it is live, refrain from touching it and immediately call 911.

Southern California Edison reported about 1,150 customers without power in Los Angeles and Orange counties, including Monrovia, Paramount, Costa Mesa and Lake Forest, according to its website.