LOS ANGELES - Following a day that saw nearly 1,200 arrests, more protests occurred throughout the Southland Monday in response to the death of George Floyd at the hands of Minneapolis police, and a band of looters raided various businesses in Van Nuys.

Dozens of looters could be seen on television footage pouring out of a Boost Mobile store on Van Nuys Boulevard late Monday afternoon, just blocks away from a peaceful protest that had the attention of police in the area.

Members of the pack also raided a marijuana dispensary and a pharmacy. At each scene, shattered glass was seen on the sidewalk -- the leftovers of looters breaking through front windows to access the businesses.

The main Van Nuys protest -- and most other gatherings Monday afternoon -- were being conducted peacefully. The crowd in Van Nuys occasionally spilled onto streets, until a discussion was held with officers on the scene and demonstrators moved back to sidewalks. Dozens of officers responded to the scene, with an armada of police SUVs parading into the neighborhood.

In Hollywood, thousands of people marched west along Hollywood Boulevard, chanting and carrying signs, including a lead banner that read, "Say Their Names," in reference to victims of police shootings. The group marched in a circular pattern, eventually moving south to Sunset Boulevard and moving back east.

There were no immediate reports of looting or violence in that group, which swarmed across streets but was overall peaceful.

In downtown Los Angeles, hundreds of protesters amassed in front of Los Angeles City Hall, briefly marching to LAPD headquarters before returning to City Hall. That protest was also uneventful.

In West Los Angeles, another group of protesters gathered outside the Federal Building on Wilshire Boulevard near Westwood. Some members of that group marched into the San Diego (405) Freeway at Wilshire and briefly blocked northbound lanes. Police quickly responded to the scene and the crowd retreated off the freeway.

On the outskirts of West Hollywood, hundreds of people gathered peacefully outside the Laugh Factory comedy club, the marquee of which had a photo of Floyd. That gathering was highlighted by a poignant moment, when LAPD Cmdr. Cory Palka spoke to the crowd and dropped to one knee in a sign of solidarity with the crowd, which cheered in response.

The demonstrators told Palka they would disperse peacefully when the countywide curfew took effect at 6 p.m. Well before them, many people already began walking away.

The demonstrations came a day after destructive protests in Santa Monica and Long Beach.

Police agencies in Los Angeles, Santa Monica and Long Beach combined to report nearly 1,200 arrests during those protests, many of them misdemeanors for violating curfews.

City and county authorities hailed the generally peaceful posture of the vast majority of people protesting the death of Floyd, and attributed the waves of destruction that occurred to "opportunists" taking advantage of demonstrations to loot and vandalize.

"For those that are doing peaceful protest ... we hear you, we support you and we know that you are not part of this element that is going out and doing this looting," County Supervisor Kathryn Barger said. "And we appreciate you helping to protect those businesses, which I saw time and time again over the weekend. But please stay safe."

Barger said legitimate protesters were not out to cause problems.

"You've got a small group that infiltrated and, in fact, I believe used these peaceful demonstrators as a way to divert attention so they could go in and do illegal activity," she said.

Barger called the looters "criminals who quite frankly are not here for George Floyd, because if you listened to George Floyd's family this morning, you heard loud and clear it's not about violence. It's about protest and change, and in this county we are committed to working with every single sector to ensure that happens, including law enforcement." 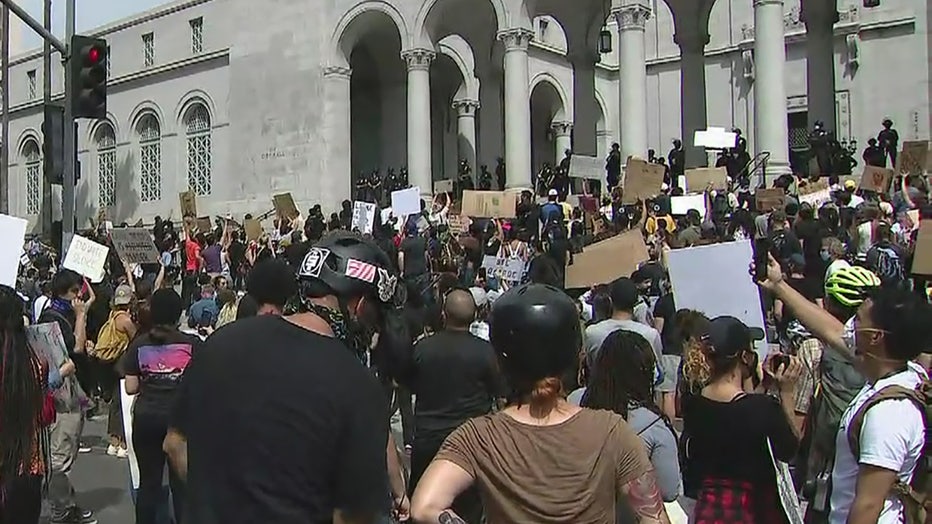 That sentiment was echoed by elected officials and law enforcement authorities across the Southland -- all vowing to support peaceful protest while condemning instigators who infiltrate crowds to sow violence, and also decrying looters who arrived in vehicles to smash their way into businesses while police were tending to protests.

Los Angeles Police Department Chief Michel Moore said about 700 arrests were made during Sunday's demonstrations, on top of 400 who were arrested Saturday and 500 on Friday.

Moore said he was seeing "attacks on officers the likes of which I haven't seen in decades," noting the projectiles hurled at police.

Various protesters in turn have accused police of using heavy-handed tactics during the protests, including the firing of rubber bullets, tear gas and other projectiles at demonstrators.

"Where are we today in Santa Monica? Today we are rebuilding," Santa Monica Mayor Pro Tem Terry O'Day told a crowd at the Santa Monica Pier Monday morning. "We are not defeated. ... Today we show the nation what a community means and why it matters."

A countywide curfew was imposed Sunday in Los Angeles from 6 p.m to 6 a.m. Monday after violence and looting broke out in Santa Monica, Long Beach and other areas. That curfew was imposed again on Monday for the entire county and city of Los Angeles. Several cities issued modified curfews of their own, with citywide curfews taking effect early afternoon in places such as Santa Monica, Beverly Hills and West Hollywood.

Beverly Hills was hard-hit Saturday along with L.A.'s Fairfax District, and Santa Monica was under siege Sunday.

In Santa Monica, a peaceful march down Ocean Avenue that started around noon Sunday was overshadowed by looting reported at several stores in Santa Monica Place shopping center and on nearby Fourth Street. News footage showed many people carrying merchandise and running out of stores that had been broken into.

The National Guard eventually made its way to the city to help restore order, but the damage had been done. The city's upscale shopping district resembled a war zone Sunday night, with dozens of businesses vandalized or looted.

Santa Monica Police Chief Cynthia Renaud said about 400 people were arrested, and about 95% them did not live in the city.

Throughout the protests, brazen bands of looters could be seen driving into protest areas, leaping out of vehicles, robbing businesses and driving off. Some people attempting to take part in peaceful protests could be seen trying to prevent businesses from being vandalized, but they the looting continued.

National Guard troops also faced off with demonstrators Sunday outside City Hall in downtown Los Angeles. The verbal confrontation became more active around 6:30 p.m. after the countywide curfew went into effect and police began making mass arrests of people who refused to disperse.

In Long Beach Sunday, several thousand people took part in a protest that started at 3 p.m. at Long Beach Police Headquarters and marched through the downtown area. Police eventually set up skirmish lines along Pine Avenue, and protests remained largely peaceful, other that some individuals in the crowd who let fireworks aimed at officers.

But looters began their rampage around 5 p.m., hitting several businesses in The Pike Outlets including T Mobile and Luxury Perfume. They also stole from the Jean Machine in the City Place Shopping Center, Mark Schneider Fine Jewelry in the Promenade, a Ross store and several businesses along Long Beach Boulevard including El Super and a CVS. They could be seen making multiple trips inside stores to carry out armfuls of merchandise, which they loaded into awaiting vehicles, taking selfies and brazenly smiling for television cameras.

Long Beach Mayor Robert Garcia said about 75 arrests were made Sunday and he blasted looters who took advantage of the protests to engage in lawlessness.

"What happened last night to our small businesses was unacceptable. We should be angry and saddened by the behavior of these people and these criminals," Garcia said.

Long Beach Police Chief Robert Luna said he supports the cause of protesters and was equally dismayed by Floyd's death in Minneapolis. He said the vast majority of demonstrators acted peacefully, but there were select agitators in the crowd who threw rocks, bricks and bottles at officers.

"This is not the way to create change," the chief said. "Not at all."

He also said police "didn't allow" looting to occur, but officers struggled to respond to a rapidly unfolding melee and to major increases in calls for help. Luna said Long Beach police typically receive about 1,726 calls for service on an average day, but that number jumped to 4,686 on Sunday.

Roughly 1,000 National Guard personnel were deployed to the area over the weekend after Gov. Gavin Newsom declared a state of emergency Saturday for all of Los Angeles County.