A wild fight on the LA Metro was caught on video. The man who took the video said occurrences like this aren't out of the ordinary, and is asking for increased security.

LOS ANGELES - The fight videotaped on the Metro’s Blue Line is violent.

What started it? The man who recorded the incident on his cell phone, Edgar Nuñez, doesn’t know.

Nuñez uses the train and buses regularly and extensively from east of the 405 Freeway to Beverly Hills where he works in one of the hotel kitchens.

Nuñez explained he started posting videos on an Instagram page (please let link to  peopleofmetrola  - you can see it on slack) to let people know how bad things have gotten.

Now, we’ve seen videos of incidents on metro trains before, but this one goes on for a while. The conductor does stop at one station but the fight continues through two stops, and even goes onto the platform.

"I never saw security show up," says Nuñez, adding that authorities were alerted.

One of the people in the fight pulls out a Taser and uses it repeatedly. Nuñez says the man also had a screwdriver, pepper spray and another taser, shuddering when we wonder what would have happened if he had a gun, and used it.

We reached out to Metro, as this video speak not only to the violence, but raises questions about issues they’ve been asked about before – from passenger safety, to lack of security in all trains.

LA Metro issued the following statement in response to the violent incident:

"The Instagram video is extremely upsetting and concerning to us.  We have zero tolerance for violence on our system.

Upon review of the video, we have shared it with our law enforcement partners to further investigate this incident.

We have deployed a comprehensive, multilayered safety plan that was developed with the input of our customers, employees, stakeholders, community members and law enforcement. The plan makes significant investments in people, infrastructure and technology to create a safer, cleaner and more comfortable transit system. We are adding security personnel and will be installing surveillance cameras and improved lighting and investing in technologies like our Transit Watch app to enable riders to instantly report issues on our system.

Metro calls for the public’s help to provide any information about this incident.  If you see something, say something. Please call 888.950.SAFE (7233) or 911 in an emergency.  Transit riders can also download Metro’s Transit Watch smartphone app now available for both iPhone and Android to anonymously report any information they have regarding this incident." 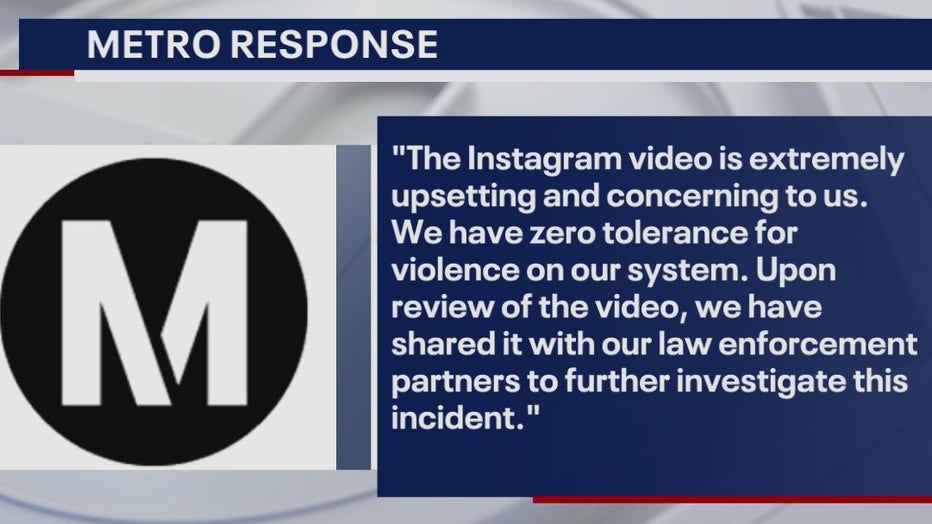 LA Metro issued a statement after a video on social media showed a violent confrontation on the Blue Line.