WASHINGTON - Federal judge Reggie Walton scolded Tampa-area resident and criminal defendant Adam Johnson for his "clownish behavior" and called him weak minded enough "to follow a lie and do what you did."

And there are plenty of now-viral pictures of what Johnson did.

Federal prosecutors say Johnson walked away with House speaker Nancy Pelosi’s lectern and gleefully posed with it during the deadly riot at the U.S. Capitol on January 6, 2021.

Last time we saw him in January, Johnson was in federal court in Tampa, being released on bond with an ankle monitor. Now 10 months later, he has decided to resolve his case and skip a jury trial.

Monday morning, in a virtual hearing connected to a DC courtroom, Johnson pleaded guilty to entering and remaining in a restricted building. The rest of the charges against him were dropped by prosecutors. 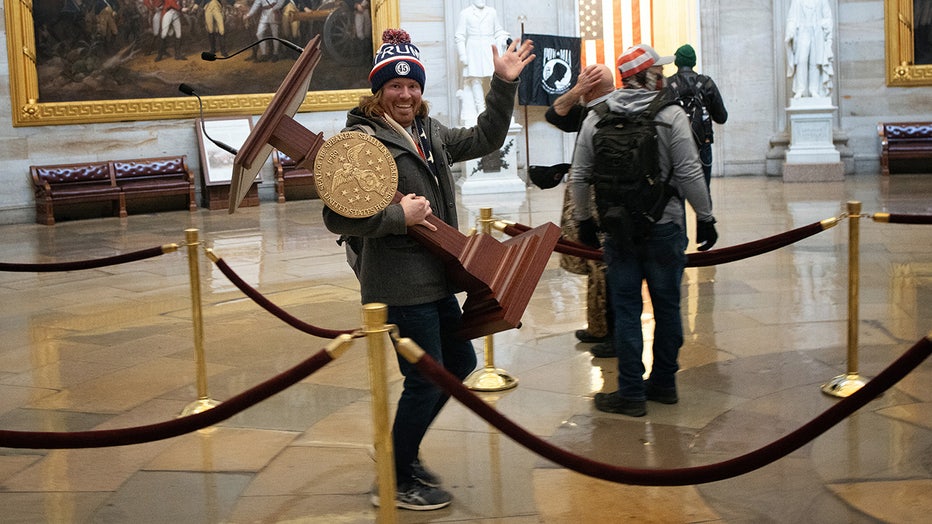 A pro-Trump protester carries the lectern of U.S. Speaker of the House Nancy Pelosi through the Rotunda of the U.S. Capitol Building on January 06, 2021. (Photo by Win McNamee/Getty Images)

Under his plea agreement, Johnson is facing up to six months in prison and a $500 fine.

As the one-hour hearing wrapped up, the judge had a few more choice words for the Parrish man, saying he said he didn't understand Johnson's mentality for thinking this was a fun event to be involved in and asked, "so why shouldn't I lock you up, sir?"

Johnson apologized for his regrettable behavior and told the judge, "I am pleading guilty because I am guilty."

Johnson will be sentenced in Washington on February 25, 2022.