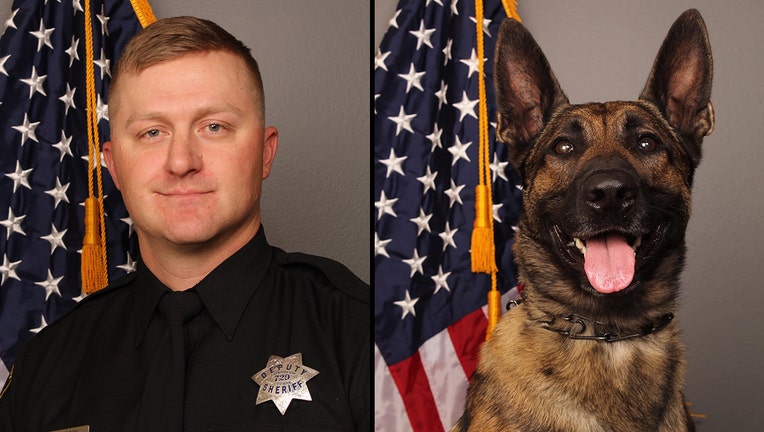 SACRAMENTO, Calif. (AP) - A California sheriff’s deputy was killed and another deputy was wounded in a shootout with a suspect who gunned down a K-9 officer before he was fatally shot, authorities said.

The gunbattle erupted in Sacramento near a racetrack at the Cal Expo event venue after a vehicle pursuit late Monday, Sacramento County Sheriff Scott Jones said.

The deputy who died was identified as Adam Gibson, a six-year veteran of the department, Jones said.

He leaves behind his wife, 9-month-old child, parents and several siblings.

K-9 Riley was 5 years old and had been in-service with the Sacramento County Sheriff's Department for three years.

The injured deputy was in stable condition, Jones said.

He was identified Tuesday as Robert Stephen Calderon by his mother, Jenny Calderon, who talked to the Sacramento Bee. He had a history of criminal activity, drug use and mental illness, according to his family and court records.

Calderon said that her son had been on drugs in the past, and "I think he was bi-polar."

"He saw people coming out of the walls," she said. "They would come, and they would abuse him. And he was mad at me because he thought I was letting them into his room."

Calderon said that led him to get a gun and that she had no idea how he was able to obtain it.

The pursuit and shooting followed an attempted traffic stop, Jones said, and the driver ended up crashing on the Cal Expo grounds.

"One of the K-9 officers deployed a K-9 dog up to the vehicle to try and assist getting the suspect out of the vehicle. The suspect immediately shot and killed the K-9 unit, then immediately started firing at the officers," Jones said.

It wasn’t immediately known what prompted the attempted traffic stop.

His family described Calderon as a former truck driver and in-home health services worker who loved animals and had a small pug named Max. They said he was frequently homeless and living in a Chevrolet Suburban, often parking it outside the used clothing store where deputies contacted him Monday night.

Calderon cycled in and out of custody for decades, according to court records.

He had a combined nine felony and misdemeanor cases out of Sacramento County dating to 1993, Superior Court records show. The cases generally involve drugs and stolen vehicles. His most recent local case, a felony, came in 2012. He was sentenced to 16 months in state prison for vehicle theft.

Jenny Calderon broke down several times speaking about her son and what he had done. Speaking in her apartment, Calderon said she was mourning not only her son, but especially the fallen deputy and his family.

"I’m glad he’s dead because if he knew what he had done to that deputy’s family, he wouldn’t be able to live with himself," she said.