Vice President Kamala Harris was in the Bay Area on Wednesday -- to campaign alongside Governor Gavin Newsom in the 2021 recall election. The election is being held on Tuesday, just six days away. KTVU's Greg Lee reports.

SAN LEANDRO, Calif. - Vice President Kamala Harris returned to her home state of California on Wednesday to rally voters against the recall of Gov. Gavin Newsom, whose campaign expressed growing confidence the first-term Democrat would survive the attempt to remove him from office a year early.

Harris crafted the race as a battle between California's progressive values and Republicans looking to take the nation's most populous state backward on women's rights, abortion access and labor and immigrant rights. She echoed Newsom's campaign message that the outcome will ripple beyond the state.

California, the world’s fifth-largest economy, is a laboratory for many progressive policies before they hit the national stage and losing a liberal governor would be a national embarrassment for the Democratic Party. President Joe Biden also is expected in California just ahead of Tuesday’s election. 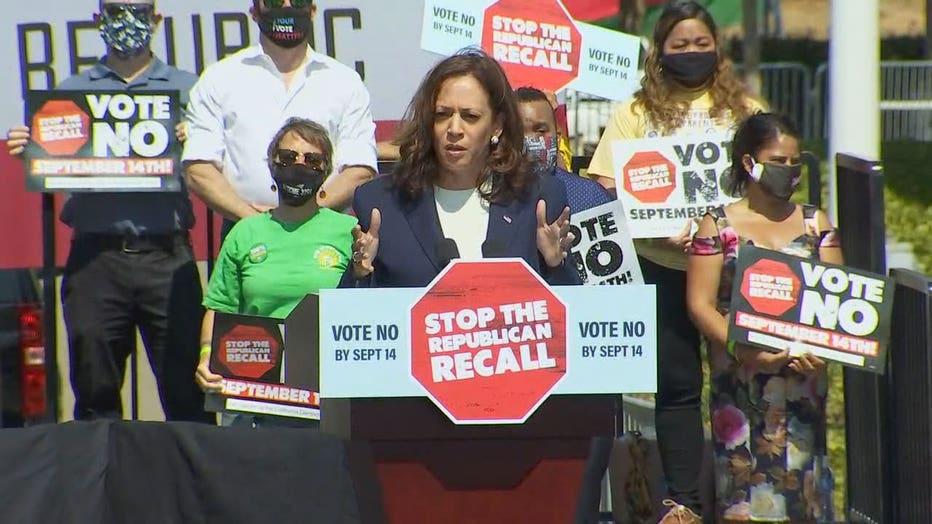 The outcome also will provide a test ahead of the 2022 midterm elections, when control of Congress and more than half of the nation’s governorships are up for grabs.

The California Republican Party said Harris’ appearance was inappropriate as some Californians remain stuck in Afghanistan following the U.S. withdrawal.

"It is both pathetic and telling that Vice President Harris and Governor Newsom think political campaigning is a better use of time today than working to rescue the California children and families, Americans and allies who were abandoned in Afghanistan by the Biden administration," party Chairwoman Jessica Millan Patterson said in a statement.

Three California school districts said recently that they know of more than 30 children who have not been able to return from Afghanistan. They are among U.S. citizens and legal permanent residents looking to escape Taliban rule, and President Joe Biden has promised that evacuation efforts will continue for the 100 to 200 American citizens who want to leave.

The visit by Harris, a longtime friend and political ally of Newsom, came with six days left in the recall campaign. More than 6 million of the state's 22 million registered voters already have cast ballots by mail. Voting ends Tuesday.

Kamala Harris to be in San Leandro for Gov. Newsom

Kamala Harris will campaign in San Leandro at the IBEW-NECA joint apprentice training center with Newsom after a previously planned visit was nixed due to the chaos surrounding the Afghanistan withdrawal. Elissa Harrington reports

Democrats hold a 2-to-1 registration edge over Republicans, making the recall a decidedly uphill battle for the GOP. A poll by the Public Policy Institute of California released last week showed a slight majority of Californians approve of Newsom's job performance and a larger majority — 58% — oppose the recall.

The election has two questions: First, whether voters believe the governor should be recalled, and then, who should replace him. Voters choose from a list of 46 replacement candidates — most of them political unknowns. With so many candidates, if the recall succeeds, it’s possible a candidate could win with 25% or less of the vote. Newsom won in a landslide in 2018.

Republicans have gone after Newsom for his handling of the coronavirus pandemic and the economy, with business owners and parents expressing frustration over long-lasting restrictions on businesses, mask mandates and school closures. In contrast, Newsom has sought to nationalize the recall campaign, tying the effort to restrictive voting laws passed by Republican legislatures and warning during a campaign event last weekend that "we did not defeat Trumpism" in 2020.

As Newsom campaigned with Harris, his Republican rivals greeted voters across the state. Talk radio host Larry Elder, the GOP frontrunner, told reporters in Los Angeles that Harris and Biden were trying to distract attention from Newsom’s record on widespread homelessness, rising crime and long-running school and business closures during the pandemic.

"They are so afraid, they want to federalize this election. This is about California," said Elder, who could become the state’s first Black governor. "This federal firepower is not going to help him."

Newsom campaigns in Mission District, hopes to drum up support from Latinos

With one week until recall election day, Governor Gavin Newsom campaigned at a phone bank in San Francisco’s Mission District, hoping to drum up support in the Latino community.

Elder spoke briefly with reporters after voting at an election center and before starting a statewide bus tour. Asked if he had concerns about the integrity of the election, he said "there might very well be shenanigans, as there were in the 2020 election," referring to former President Donald Trump’s unsupported claims of fraud in his loss to Biden.

In a briefing with reporters, Newsom campaign manager Juan Rodriguez and other advisers said the governor's bold actions to contain the coronavirus may prove decisive.

Newsom strategist Ace Smith said he believes the outcome will show a "clear mandate, not only against the recall, but for sanity" on public health.

In the late spring and summer, Newsom’s campaign messaging centered on the idea that California was "roaring back" from the pandemic. California dropped almost all of its restrictions on businesses and gatherings on June 15, allowing people to return to baseball games, concerts and other large gatherings. 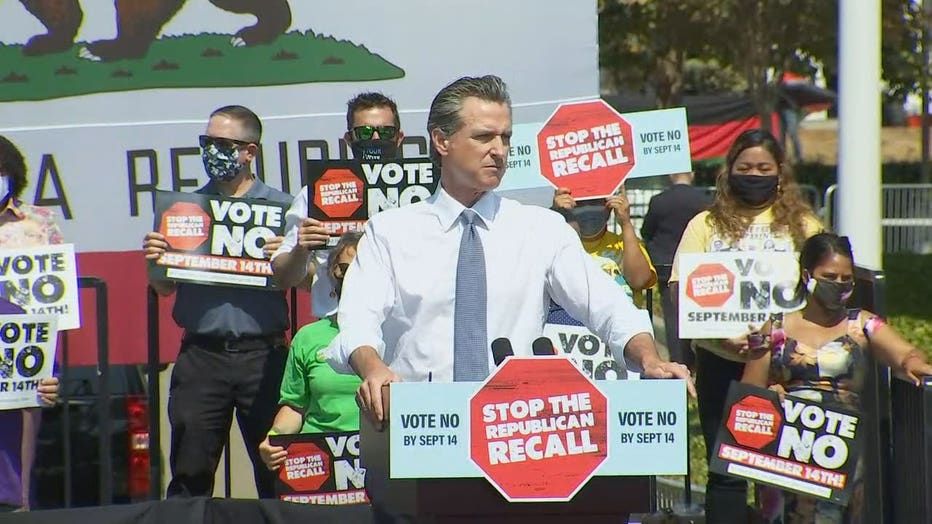 The campaign ceased that messaging by midsummer as the delta variant raged. Instead, it focused on a contrast between what Newsom and his Republican rivals would do.

"We have a bunch of crazy people on the other side" who don’t want people to wear masks and take vaccines, Newsom adviser Sean Clegg said.

Harris said Newsom's pandemic actions are reflective of his penchant for stepping out front on contentious issues, like when he went against federal law to issue marriage licenses to LGBT couples as mayor of San Francisco in 2004.

"Gavin rose to the moment," she said.