Gov. Gavin Newsom today unveiled a four-tier, color-coded system that will use daily coronavirus case numbers and positivity rates to guide counties' ability to reopen businesses, a process he said will take a slow and more stringent approach to economic reopening.

LOS ANGELES - Gov. Gavin Newsom introduced a new four-tier, color-coded system Friday that will replace California’s monitoring list. Under the new system, all of the state's hair salons and barbershops are permitted to reopen indoors with modifications.

The system goes into effect after Labor Day weekend as gyms, bars, nail salons, and restaurants for indoor dining will remain closed in the majority fo California through the holiday weekend.

"COVID will be here for a long time and we need to adapt,” the California governor said.

He said the state will be “much stricter” the second time around and there will be a three-week waiting period for counties to move from one tier to another.

Newsom didn’t immediately say which businesses will be included in which color tier or what the reopening will look like.

RELATED: Barbershop in Santa Monica moves operations outside in order to stay afloat 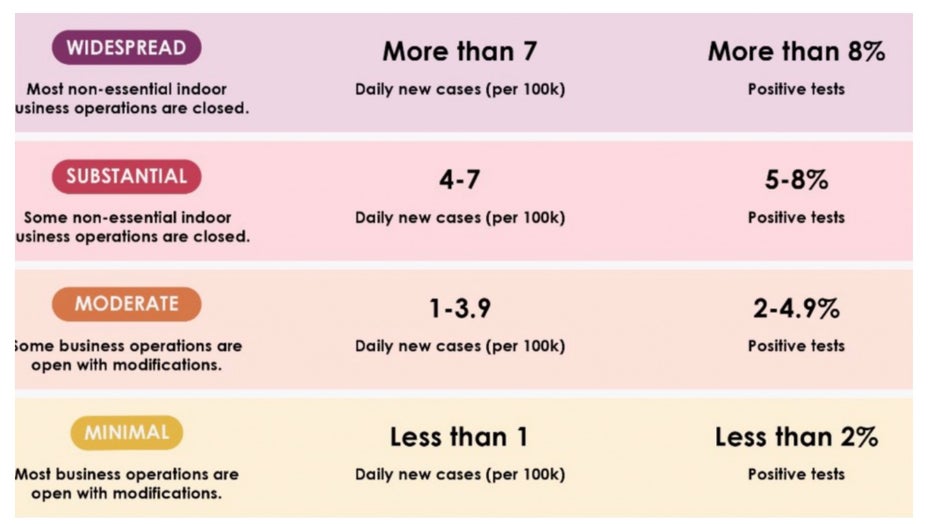 "This is a reminder that we’re not out of the woods…we need everyone’s efforts still and now we need 40 million people to come together to crush this curve," Dr.Ghaly said.

The new process will put more power with the state instead of the counties. 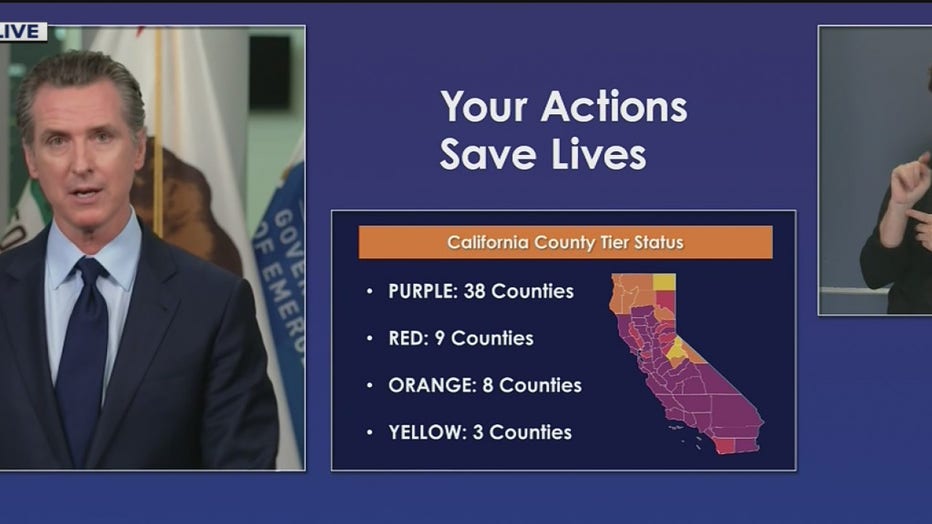 With the new system, the greater majority of the state remains in the “purple,” which requires additional modifications. This includes all of Southern California with the exception of San Diego County.

The new system in order of severity is as follows:

Widespread (Purple): A positivity rate above 8%. This will replace the state’s old monitoring list.

Minimal (Yellow): A positive rate that is less than 2%.

The new process for reopening businesses is slower and more gradual than what the state tried earlier this summer amid the coronavirus pandemic.

The new rules come nearly two months after Newsom shut down bars, restaurants for indoor dining and a slew of other businesses following a surge in cases after the state’s first reopening attempt.

RELATED: Gov. Newsom orders additional businesses in most of California to reclose

The state will now report virus statistics, such as case numbers, on a weekly basis.

The new approach is aimed at ensuring the state’s cases don’t skyrocket when businesses begin to reopen.

In anticipation of the Democratic governor’s announcement, there was a common refrain from businesses and local governments buffeted by the outbreak: We need clarity.

Counties need to understand clearly “what thresholds to aim for and the public health data that will determine success or failure,” the California State Association of Counties said in a statement.

That was echoed by the California Restaurant Association, which has seen the state’s once-thriving food industry wither under restrictions that have closed indoor dining rooms and left many businesses to survive on takeout, delivery and limited outdoor seating, if they have the space. The association estimates as many as 1 million workers have been furloughed or laid off.

“Restaurants in every corner of the state are on life support right now. Every day that passes with a dining room closed, a restaurant owner is more likely to shut the doors permanently,” he said. “It’s gotten to a crisis level.”

Supervisor Karen Spiegel, who has recovered from a bout with the virus, said she hopes the state plan recognizes different levels of risk that come with different business activities. She’s puzzled why shoppers can fill a Costco, where she stopped Thursday, while indoor hair salons remain off-limits.

Using metrics, the state needs to change how businesses are categorized, Spiegel said. “We have to do more of a risk-based approach.”

California has the most confirmed virus cases in the nation, with nearly 700,000, and the third-most deaths — 12,550. But since the closures last month, the average number of daily cases has been falling along with the infection rate and hospitalizations, which peaked at 7,170 on July 21 and since dropped to about 4,300.

Prior to the new plan, the state had relied on a so-called county watch list.

Most of California’s 58 counties, including the most populous — Los Angeles — remained on a state monitoring list because they were above one or more of the benchmarks for cases, infection rates and hospitalizations. Inclusion on the list restricted what businesses can operate, whether schools can offer classroom instruction and limits other activities, such as attending indoor religious services.

But as the state’s coronavirus data has improved in recent weeks, some counties got off the list, including San Diego and Orange, the second- and third-largest counties by population.