California's Employment Development Department has settled a landmark case, agreeing to pay close to 100,000 people who are eligible for unemployment checks but who had their payments frozen because of questions about their eligibility.

OAKLAND, Calif. - California's Employment Development Department has settled a landmark case, agreeing to pay hundreds of thousands of people who are eligible for unemployment checks but who had their payments frozen because of questions about their eligibility.

And so what has been called "conditional pay" will now be switched to a "pay now" policy.

In other words, as a result of a class action lawsuit, the EDD must now stop its policy of freezing benefits for people whose existing claims have eligibility questions and instead continue sending checks while they investigate the problem. Claimants whose payments are currently frozen will get paid for all the weeks they have missed.

"I was really happy because I've been waiting for so long," said 32-year-old Katrina Aulaumea-Bullis, who said she wasn't even sure what the glitch was with EDD because no one called her back to figure out what might have been inaccurate in her form. However, a payment of $5,600 was deposited on her EDD debit card Friday morning as a result of a major settlement reached last week. She'd been waiting for that money since February.

If claimants like Aulaumea-Bullis are ultimately found to be ineligible, they may have to repay the money. But they also might be off the hook. The EDD will waive repayments if the claimants are able to demonstrate a financial hardship and the overpayment was not the claimant’s fault or because of fraud.

The change to pay conditional benefits applies only to people who had already started receiving benefits for at least a week.

"This is a monumental change by EDD that will allow more claimants to be paid on time," said Daniela Urban, executive director of the Center for Workers’ Rights, a Sacramento organization that fielded thousands of unemployment claimant phone calls and letters since March 2020.

The settlement with the EDD was reached in Alameda County Superior Court on Thursday with the Center for Workers’ Rights, which was represented by the law firm, Altshuler Berzon LLP, in San Francisco.

Attorney Michael Rubin said to his knowledge, California is the first state whose unemployment benefits agency has been required to reform its procedures and pay conditional benefits to claimants as a result of a lawsuit.

Rubin said that the timely payment of benefits is essential to achieving the purposes of the unemployment insurance program, and people have a constitutional right to the continued payment of their benefits.

By law, the EDD has two weeks to determine eligibility. But by EDD's own count, in late June of this year, they had about 120,000 people in a continued claims status who had been waiting more than 21 days to resolve their eligibility issues.

To Rubin, people not getting paid while the EDD investigated any discrepancies was "the most pressing and important problem" during the pandemic.

SEE ALSO: EDD: Californians must look for work to qualify for jobless aid

The situation escalated during the pandemic, he said, because the EDD had so many cases to handle that "they just got way behind and non-payments kept stacking up."

Rubin said there have been estimates between 300,000 and 600,000 people who have fallen into this "conditional pay" category since the pandemic.

The EDD acknowledged that they got backed up and there were long lines of people waiting to get paid.

"We know many claimants who cleared fraud filters and verified identity have been waiting too long for payment," EDD Director Rita Saenz said in the news release announcing the "pay now" policy.

The EDD can find people temporarily ineligible for a variety of reasons and these discrepancies exist when the employers' records don't match the records of the person claiming unemployment insurance.

Examples include rounding errors in reported income, when employers submit quarterly reports on earnings, which don’t match what claimants said. Or the employee may have gone on vacation or been sick during which time they were ineligible.

People eligible for conditional payments will get an alert in their UI Online account or in the mail. The first checks were sent out on July 23.

Aulaumea-Bullis said the payment she received that day was for 13 weeks of EDD benefits, but she is still waiting on a second-batch payment for 12 additional weeks.

"It's been hard to get a job and stuff just because of COVID, and everything, and we literally had to move out of our apartment because we couldn't afford it," Aulaumea-Bullis, said. She and her wife left their Hayward apartment to stay with a family friend. 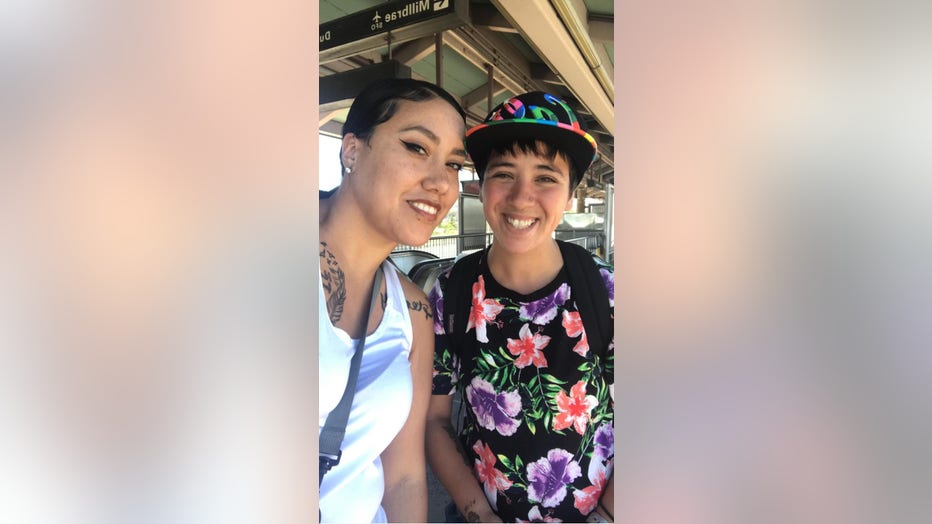 Katrina Aulaumea-Bullis and her wife left their Hayward apartment to stay with a family friend while her EDD benefits were frozen.

Elijah Isaac, 33, of the Central Valley got paid the full amount of benefits that were pending.

He was deemed temporarily ineligible because he didn't report his last employer correctly when he filed for a new claim. He worked for one day in casting as an extra on TV and didn't think to write it down, and the EDD thought it seemed fishy.

But as a result of the settlement, he was paid for seven weeks of back pay on Friday.

That never would have happened, he felt, if the EDD's hand hadn't been forced.

"I would have been waiting probably 13 to 15 weeks had this not gotten processed," he said.