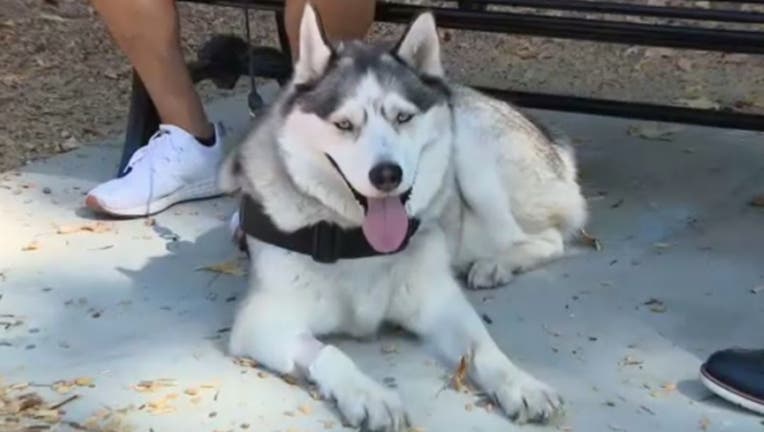 An Alaskan Husky became sick after recently ingesting meth during a walk in San Jose, as California grapples with drug-fueled homeless encampments throughout the state.

10-year-old Loki was out with his owner in South San Jose when he sniffed around bushes and brush that contained traces of meth. Loki's owner David Espinal believes the pooch accidentally ate the lethal substance somewhere in the bushes.

According to Espinal, everything seemed normal until the canine started rapidly running around back at home.

"(We) come home. Eats his dinner. About 30 minutes later, he begins to pace around our apartment," David Espinal told FOX 2 San Francisco.

Loki was diagnosed with meth poisoning and fully recovered after spending a night at a nearby animal hospital. Meth poisoning in dogs often results in seizures, tremors and eventually death.

"When I first saw the thing, I was like, not my baby!" Espinal exclaimed.

SUGGESTED: Dog blinded after ingesting oxycodone while on a walk at Palisades Park in Santa Monica

"Historically our doctors would see a handful of cases a year," Schropp said. "And now our doctors are seeing one to two cases per month."

Schropp theorizes that drug use in homeless encampments are likely caused the uptick in cases. Communities across the Bay Area are currently plagued by a homeless crisis exacerbated by hard drugs.

The Bay Area has seen an increase in homeless camps since the start of the COVID-19 pandemic. The City of San Francisco was sued last month by homeless advocates who demanded that city officials stop "harassing" vagrants residents by sweeping camps.

In the meantime, Loki's owner suggests that other dog-walkers stay aware of their surroundings.

"You have to be super vigilant," Espinal stressed. "You can’t even let your dog’s rummage through bushes."

Get the latest updates on this story on FOXNews.com.