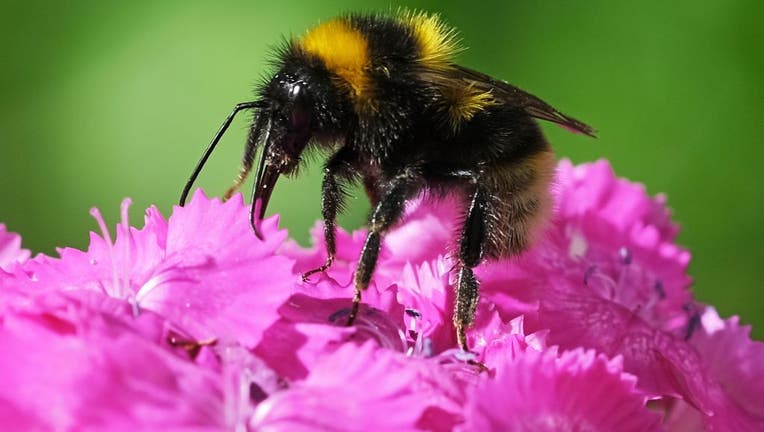 28 May 2022, Hessen, Frankfurt/Main: A bumblebee sits on a bearded carnation in a garden. Photo: Oliver Berg/dpa (Photo by Oliver Berg/picture alliance via Getty Images)

SACRAMENTO, Calif. - A bumblebee is a fish under California law, a California court said in a ruling this week.

And thus, the bumblebee should be protected by the state’s endangered species ordinances, court documents show.

In the case, Almond Alliance of California v. Fish and Game Commission, the California State Appellate Court of the Third District said the "issue presented here is whether the bumblebee, a terrestrial invertebrate, falls within the definition of a fish," according to legal documents.

According to the judges, the bumblebee is classified as a fish as a liberal interpretation of the word "fish", as well as the state’s own legislative history, including non-aquatic life.

The judges explained that "although the term fish is colloquially and commonly understood to refer to aquatic species," the law, as it is written, makes the legal "definition of fish… not so limited," the court documents show.

The court explained the "Endangered Species Act" has given classification authority to the Fish and Game Commission to determine what is and is not an endangered species, court documents show.

And, under the law, the commission is solely responsible for establishing "a list of endangered species and a list of threatened species." The court also found the commission’s authority "was not limited to listing only aquatic invertebrates."

The state’s own legislative history also supports this "liberal interpretation" to classify a non-aquatic bumblebee as a "fish" as under state law "the Commission may list any invertebrate as an endangered or threatened species."

An off-duty firefighter helped remove a colony of bees that swarmed a vehicle parked at a supermarket in Las Cruces, New Mexico, on Sunday, March 28, the Las Cruces Fire Department (LCFD) said.

Before 1969, the law defined fish as "wild fish, mollusks, or crustaceans, including any part, spawn or ova thereof." That same year, the Legislature amended a section that defined fish to add invertebrates and amphibia.

This section was changed only once, in 2015, when the state Legislature modified the definition to read "‘[f]ish’ means a wild fish, mollusk, crustacean, invertebrate, amphibian, or part, spawn, or ovum of any of those animals."

"We acknowledge the scope of the definition is ambiguous," the judges added, the court documents showed.