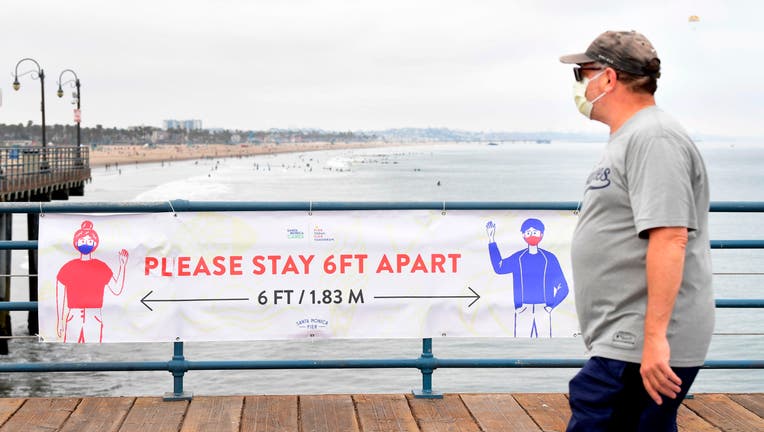 A man wearing his facemask walks past a banner reminding people of social distancing guidelines on Santa Monica Pier which re-opened on June 25 after closure for over three months due to the coronavirus pandemic, on June 26, 2020 in Santa Monica, Cal

SAN FRANCISCO - With the coronavirus surging, at least four California counties on Friday paused or prepared to backtrack on their reopening plans in a bid to halt the spread of the virus. Gov. Gavin Newsom urged an agricultural county that borders Mexico to reimpose a stay-at-home mandate.

Newsom said he was concerned about Imperial County’s high rate of positive tests and its stressed hospital system. He has already sent the National Guard to help. He said the decision on the stay-home order will be up to county supervisors, but if they can’t agree “I am committed to intervening.”

In the San Francisco Bay Area, the mayor of San Francisco halted the planned reopening Monday of barber shops, nail salons and other businesses, while Contra Costa County officials said they were re-considering a plan to reopen bars, indoor restaurants and gyms. Marin County will allow hair salons and indoor dining to resume Monday as scheduled but is delaying the reopening of gyms, tattoo shops, nail and massages salons.

The shift comes as California grapples with a rise in positive coronavirus cases, especially among younger adults, following social gatherings over Memorial Day weekend, reopened businesses in many places, including restaurants, fitness centers and hair salons, and widespread street protests against police brutality.

The number of virus cases the state reported each day has averaged nearly 4,100 in the past two weeks, much higher than the 2,800 average just two weeks earlier. More than 5,800 people have died from coronavirus complications in California.

Newsom sounded renewed alarm bells about where the state is headed after being the first governor in the country to impose a stay-home order in March. He pleaded for residents to wear masks in public, as required, and keep a physical distance from people not in their household.

Some county officials said they feared people were growing complacent, noting more cases among adults 18 to 49, and implored community members to do their part and heed state orders. 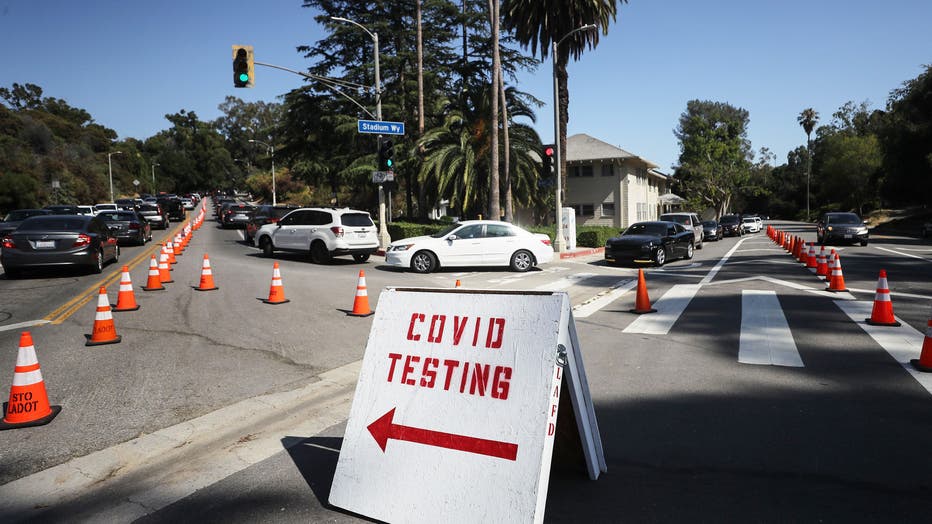 LOS ANGELES, CALIFORNIA - JUNE 26: People in cars are lined up to be tested for COVID-19 as they make their way to a parking lot at Dodger Stadium amid the coronavirus pandemic on June 26, 2020 in Los Angeles, California. (Photo by Mario Tama/Getty I

Imperial County, already the slowest in the state to reopen, had a positivity test rate that neared 23% in the past two weeks compared with 5.3% statewide. More than 500 patients have been moved to hospitals in other counties over the past five weeks to relieve its healthcare system, Newsom said.

The county of 175,000 people lies across the border from Mexicali, a sprawling industrial city of 1 million people that has enormous influence on its economy and culture. Some hospital officials in the county, which provides many of the vegetables in U.S. supermarkets in the winter, have said the increase in cases was at least partly driven by American citizens who live on the Mexico side in a region where cross-border travel and living is common.

The county’s board of supervisors met Friday afternoon to discuss Newsom’s announcement but did not take any action.

Supervisor Luis Plancarte, who also serves as the board’s chairman, said the county’s stay-at-home order remains in place, and Imperial officials will work with the governor’s office over the weekend to address the problem. He said the county’s government is pleading with residents to wear masks and continue to follow social distancing guidelines.

“We hear loudly the governor’s request,” Plancarte said during a news conference. “We are as concerned as he is.”

California is monitoring 15 counties for increases in disease transmission or hospitalizations, this week adding Contra Costa, Sacramento, Santa Clara and Ventura counties, which have all seen record spikes in reported cases.

In Sacramento County hospitalization rates have nearly doubled in the past week while in Fresno County, hospitalizations are up 61%, even as the county allowed nail salons, tattoo shops and waxing shops to reopen Friday.

“I know people are anxious to reopen — I am too. But we can’t jeopardize the progress we’ve made,” she said in a statement.

San Francisco and surrounding counties were the first in the nation to issue a regional lockdown in mid-March and successfully flattened the curve. But, the “curve is not flat right now, in fact that curve is getting more and more vertical,” Public Health Director Dr. Grant Colfax said Friday.

Marin County, which recorded its highest one-day count of confirmed cases Thursday, is struggling with a massive outbreak at San Quentin State Prison.

For most people, the virus causes mild or moderate symptoms such as fever and cough. For some, especially older adults and people with existing health problems, it can cause more severe illness, including pneumonia and death.

In San Bernardino County, officials painted a stark picture should virus cases continue to rise at recent rates. They said hospital officials voiced concerns about capacity and plans were being made for alternative care sites, like beds in a stadium.

“This is the first time that when we have discussions with hospital CEOs regarding hospital capacity that our CEOs are getting anxious. We are beginning, for the first time, to move into what we would refer to as surge capacity,” said Dr. Troy Pennington of Arrowhead Regional Medical Center. “We are stressing the system.”

For Pennington, the virus hit especially close to home when his wife, a healthy 31-year-old, got sick. He said at first, she was just tired, but one evening her fever spiked, she was short of breath and her oxygen levels dropped. She was admitted to a hospital, and though she soon went home, her symptoms lingered for weeks.

“It was a really frightening thing to realize that now, you know, on that dashboard that I’m creating daily and working with people around the county, that my wife is suddenly a statistic on that dashboard,” he said. 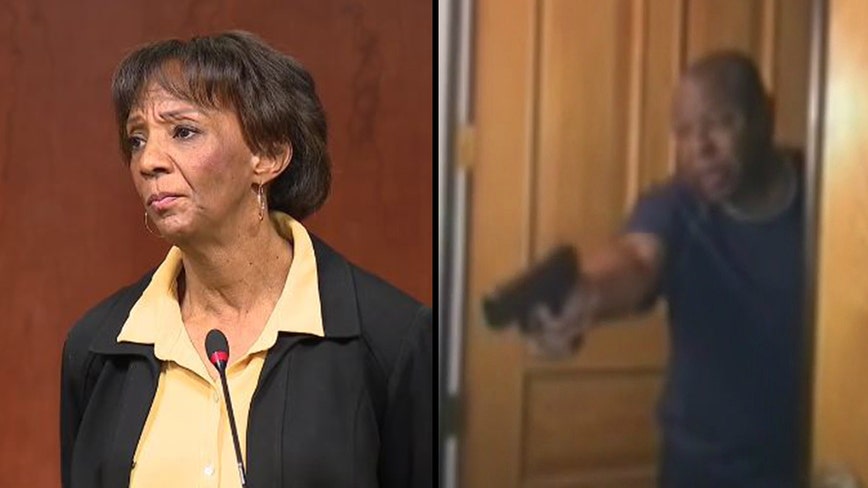 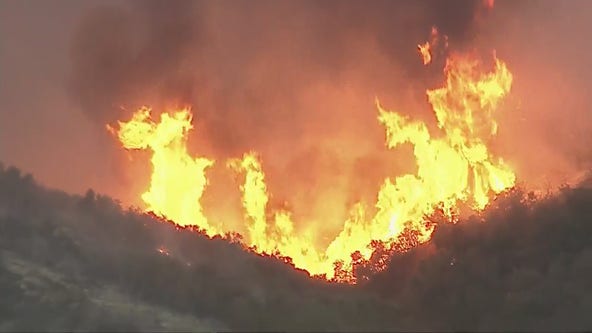