SANTA CLARITA, Calif. - The pandemic has brought huge challenges to one Santa Clarita Family. The newest member of this herd entered their lives in a very unusual way and has since become a growing part of their stay-at-home life.

A 350-pound calf is being raised by Ellie Laks and Jay Weiner inside their home. He was just 50 pounds and a week old when he was saved from a slaughterhouse, where sadly his mother met her fate.

His new "parents" run the rescue non-profit "The Gentle Barn."

Internet fans and donors named the calf "John Lewis Thunderheart" after the late Civil Rights icon — because he too is a fighter.

"He had severe pneumonia. He had loud, raspy breathing. He had a deep cough. He had an extremely high temperature," Laks said.

They quickly realized John Lewis wasn’t going to survive alone in their barn, John Lewis was moved into their air-conditioned living room and placed into an oxygen tent.  His "older brother" Sky, an Australian Shepard, laid by his side while he recovered.

"Lewis was so sick, having Sky’s help -- cuddling with him while he slept, cleaning his mouth, just nurturing him I think it's one of the main factors that saved Lewis's life," Laks said.

"They run all over the yard and tussle. Sky is very mouthy like a puppy and Lewis wonky like a cow, but somehow they make it work and understand each other," Laks said. 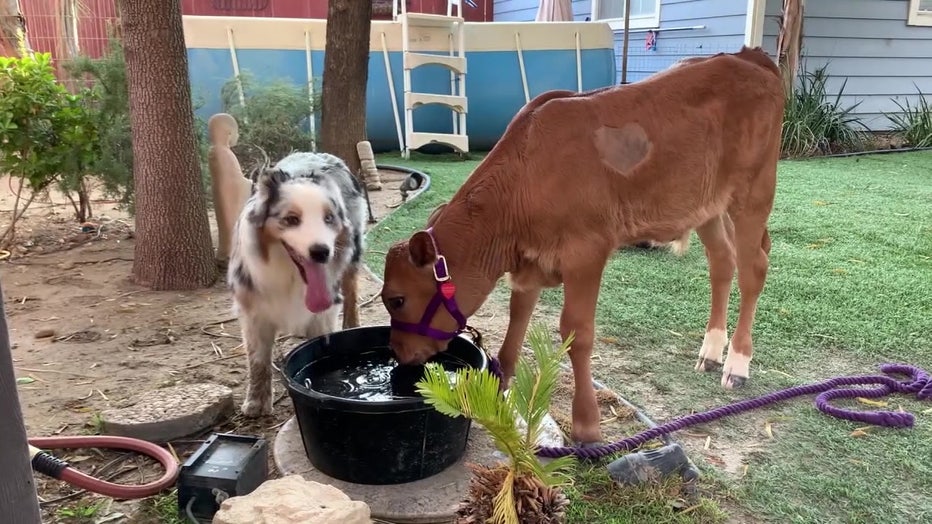 By the time Lewis is 5-year-old, he will weigh around three thousand pounds. Laks says the family is in denial, knowing he will likely have to live outside the home soon.

"I've never been a cow mom before. I've never had a cow live in the house so this is an adventure," said Laks. "We'll see we might end up with a cow in the house forever I don't know what’s going to happen!"

You can follow John Lewis Thunderheart's journey with his new family at gentlebarn.org or on the non-profits social media.