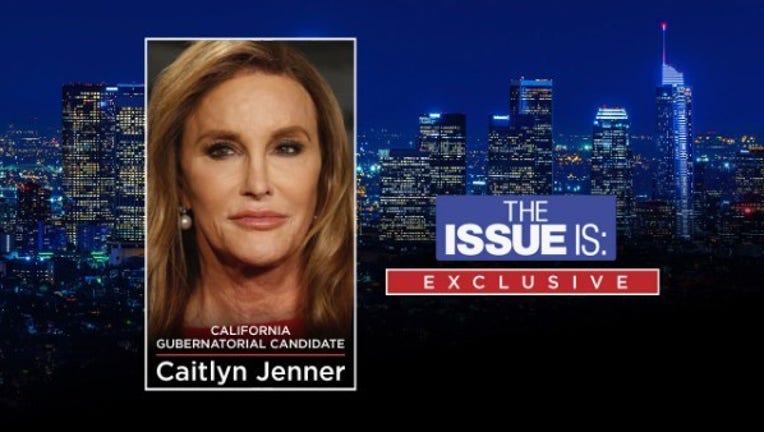 Candidate for governor Caitlyn Jenner will have her first TV interview with a California journalist on Friday night when she joins FOX 11's Elex Michaelson on "The Issue Is."

Michaelson will talk to Jenner about her specific plans to overcome California's big problems, including homelessness. The episode will air Friday night at 10:30 p.m. on FOX 11.

Jenner announced her plan to run against Democratic Governor Gavin Newsom, who faces a recall election, back in April on Twitter, writing, "I'm in! California is worth fighting for."

The 71-year-old longtime Republican, Olympic hero, reality TV personality and transgender rights actvist had been consulting with GOP advisers as she had considered joining the field of candidates hoping to replace Newsom.

"I am a proven winner and the only outsider who can put an end to Gavin Newsom's disastrous time as governor," Jenner wrote in her announcement. "Californians want better and deserve better from their governor For too long, career politicians have over-promised and under-delivered."

Jenner's "solutions" for the Golden State include cutting regulations, putting a stop to new and higher taxes, and addressing the affordable housing and homeless crises.

According to her campaign website, California is the most regulated state in the nation, with nearly 400,000 individual regulations.

"In fact, California has so many regulations that it would take an average person more than 29 weeks to read every regulation – if they dedicated a forty-hour week to doing so," her website states. "That’s right, our state government has dedicated more than 21.2 million words to regulating our families, our businesses and our lives."

If elected, Jenner promises to call on legislative leaders from both parties to enact a new "sunset law that requires every state regulation to be reviewed and renewed every ten years – or it is automatically eliminated."

To address affordable housing, Jenner says she will work with local leaders to remove restrictions and revisit any regulation blocking developers, charities, and others interested in building affordable housing.

Jenner's run for governor comes nearly two decades after the ascendancy of Arnold Schwarzenegger, another Republican who used his Hollywood fame as a springboard to the state’s highest office in a 2003 recall election.

Other Republicans who have announced their intention to run include former San Diego Mayor Kevin Faulconer, former U.S. Rep. Doug Ose and businessman John Cox, who lost to Newsom in the 2018 governor’s race.

In the recall election, which is expected sometime in the fall, voters will be asked two questions: first, whether Newsom should be removed from office. The second would be a list of replacement candidates to choose from, if more than 50% of voters support removing Newsom from office.