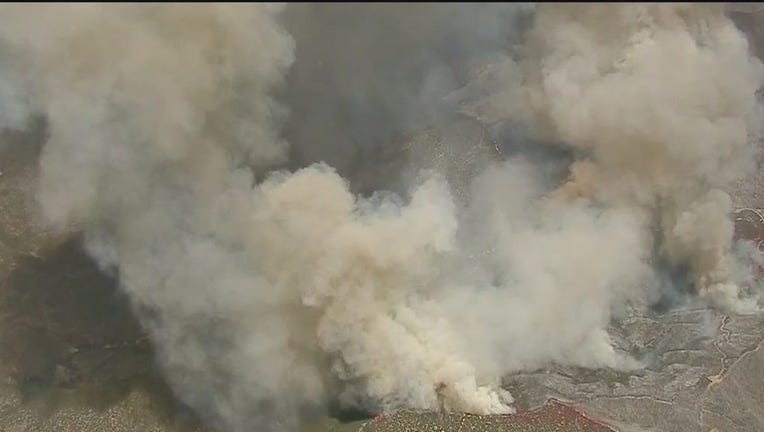 LAKE HUGHES, Calif. - Firefighters made progress Monday in the effort to put out the 31,089-acre brush fire near Lake Hughes, which has destroyed 12 structures and 21 outbuildings.

The Lake Fire is 65% contained.

According to fire officials all evacuation orders will be lifted on August 25, allowing residents to return home.

At 10 a.m. Tuesday the following areas will be repopulated.

The following road closures are still in effect:

An estimated 1,305 firefighters remained assigned to battling the blaze in some hard to reach places with potentially hazardous conditions. A dozen helicopters made water drops Sunday.

One such hazard is the Yucca plant, fire officials said. When the plant is burned, the pineapple-sized root ball is released from the soil and can roll downhill spreading flames beyond containment lines. Relative humidity in the 50-60% range helped slow the progress of the fire but also hindered efforts by firefighters to set so-called tactical fires to increase control lines, officials said.

The fire was expected to continue growing west in areas with no recent fire history and north and northwest until it transitions to the lighter high-desert fuels of the western Antelope Valley.

Full containment is not expected until Sept. 2.

Smoke advisories were extended through Monday as a result of the fire, with elevated fine particulate matter (PM2.5) levels but the smoke production has decreased and was moving north into the Angeles National Forest but could still impact the Santa Clarita area, according to the South Coast Air Quality Management District.

Residents of Pine and Kings canyons, whose homes were damaged or destroyed in the Lake Fire, were escorted back into the area Saturday and Sunday, authorities said.

Osby added the fire progressed rapidly and areas of the fire have not burned in decades.

Watch Thursday's update on the Lake Fire below:

The "Lake Fire" was reported at about 3:30 p.m. Wednesday near North Lake Hughes Road and Pine Canyon Road in the Angeles National Forest, according to Marvin Lim of the Los Angeles County Fire Department, which was assisting Angels National Forest crews, as well as assistance from the Los Angeles, Culver City, Beverly Hills, Monterey Park, Glendale and Santa Monica fire departments. 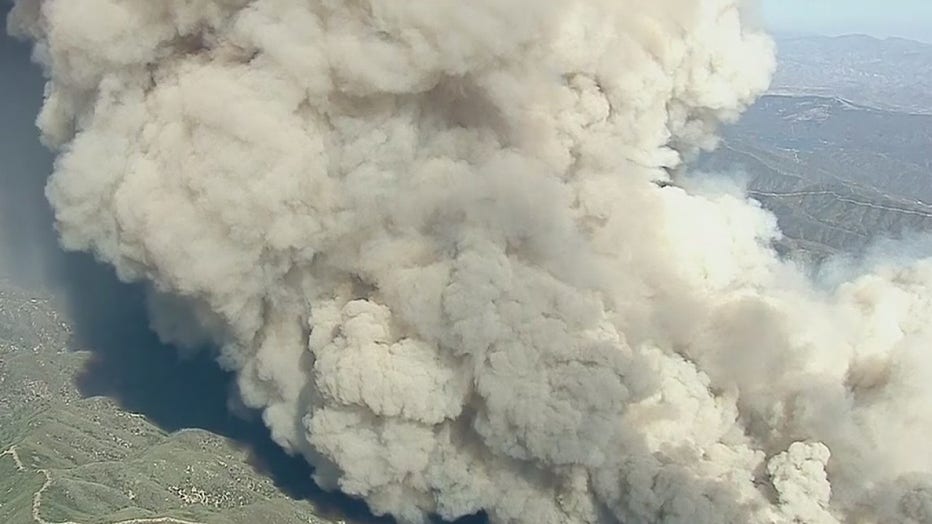 In addition to destroying 12 structures and 21 outbuildings, the fire-damaged six structures and continued to threaten others, according to incident commanders.

Officials said two people were injured as a result of the fire, but details were not disclosed.

The fire was first reported about 3:30 p.m. Aug. 12 near North Lake Hughes Road and Pine Canyon Road in the Angeles National Forest, according to the U. S. Forest Service, which was battling the blaze with the Los Angeles County Fire Department and assistance from other area departments.

The U.S. Forest Service, LACoFD, Los Angeles County Sheriff's Department, California Highway Patrol and many other cooperating agencies were working together to battle the fire, with the Incident Command Post located in the Castaic Lake Recreation Area.

Fire personnel were using the lake and surrounding areas as a base camp.