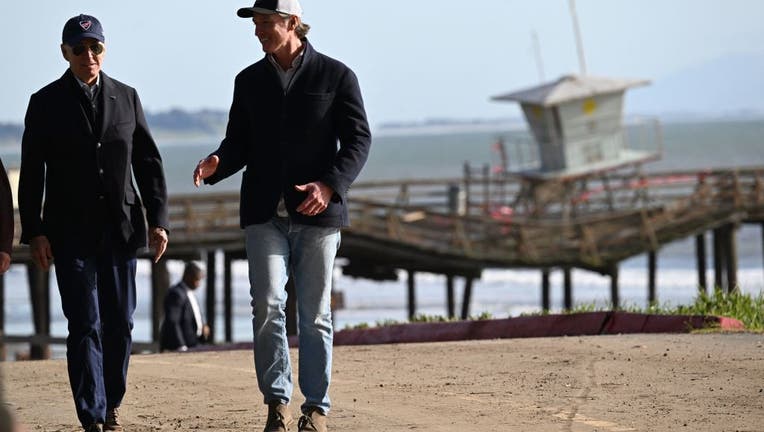 US President Joe Biden and California Governor Gavin Newsom walk to deliver remarks after looking at storm damage, and speaking to those affected in Seacliff, California, on January 19, 2023. (Photo by ANDREW CABALLERO-REYNOLDS / AFP)

President Joe Biden walked along the splintered boardwalk of a picture-postcard California beach town Thursday and heard from business owners struggling to repair damage to their shops after deadly storms caused devastation across the Golden State and killed more than 20 people statewide.

Biden toured a gutted seafood restaurant and the badly flooded Paradise Beach Grille, not far from the collapsed Capitola Pier and the brightly painted pink, orange and teal shops that are all boarded up following the storms. Walls were crumbling, debris scattered everywhere and floors swept away by raging waters.

Paradise Beach Grille Owner Chuck Maier told Biden that water had gushed up from the floor and swamped his business on Monterey Bay. "No kidding," Biden exclaimed.

"Sorry man, we’re slowing up your work" he said to contractors on the scene.

President Joe Biden visited parts of California that were among the hardest hit during the Jan. 2023 storms.

The president, accompanied by Federal Emergency Management Agency Administrator Deanne Criswell, Gov. Gavin Newsom and other state and local officials, was also meeting with first responders and delivering remarks on supporting the state’s recovery at nearby Seacliff State Park.

More than 500 FEMA and other federal personnel have been deployed to California to support the emergency operations. Thousands of bystanders gathered for the president’s visit and cheered him on.

From Dec. 26 to Jan. 17, California was deluged by 11.47 inches of rain and snow on average across the state, according to the National Weather Service’s Weather Prediction Center, with some reports of up to 15 feet of snow in the highest elevations of the Sierra Nevada.

California gets much of its rain and snow in the winter from a weather phenomenon known as "atmospheric rivers" — long, narrow bands of water vapor that form over the ocean and flow through the sky.

California has been hit by nine atmospheric rivers since late December. The storms have relented in recent days. Forecasters were calling for light rain toward the end of this week followed by a dry period. 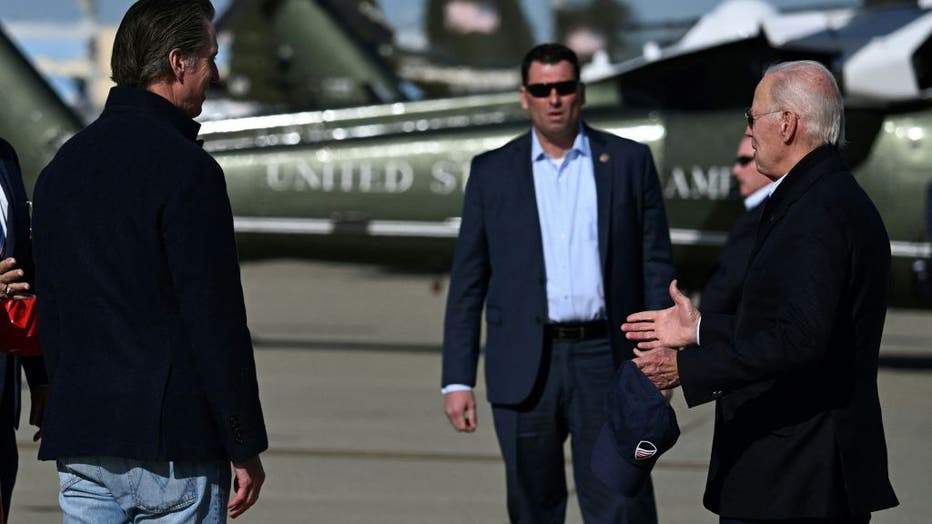 Criswell said Thursday on the trip from Washington that the president and staff have to be mindful of what people have been through when traveling to places devastated by storms and other natural disasters.

"There has just been so much trauma to this community and it’s really important that we keep that in mind," he said. "These communities have had loss of life, loss of their well-being and their livelihood, and I think it’s incredibly important that they know that the president is here to support them and that the full force of the federal family is going to be behind them."

Biden has already approved a major disaster declaration for the state, freeing additional federal resources for recovery efforts. Hours before the visit, he raised the level of federal assistance available even higher.