WASHINGTON - President Joe Biden is set to discuss his administration’s "whole-of-government COVID-19 surge response" to help overwhelmed hospitals handle a tidal wave of infections fueled by the omicron variant, including the deployment of additional military medical teams to six states.

Biden was scheduled to give an address at 10:30 a.m. about the response, which includes 1,000 military medical personnel being deployed next week to help mitigate staffing shortages at hospitals across the U.S. Defense Secretary Lloyd Austin and Deanne Criswell, Federal Emergency Management Agency administrator, were also set attend the planned remarks, the White House said.

Many facilities are struggling because their workers are in at-home quarantines due to the virus at the same time as a nationwide spike in COVID-19 cases. The new deployments will be on top of other federal medical personnel who have already been sent to states to help with acute shortages.

Criswell and Austin, who recently recovered from his own case of COVID-19, will spotlight the work of the more than 800 military personnel who have been helping civilian hospitals since Thanksgiving and the more than 14,000 National Guard members whose work supporting vaccinations, testing and caring for patients is being covered by the federal government, according to the White House. 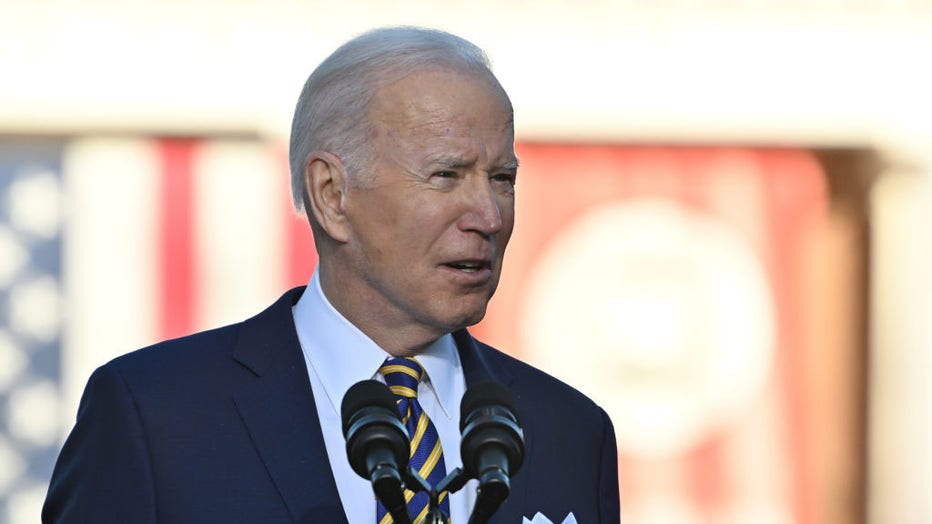 The Biden administration's focus is shifting to easing disruptions from the nationwide spike in cases that is also contributing to grocery shortages and flight cancellations.

Food shoppers across the country have encountered empty shelves due to supply chain issues, increasing COVID-19 infections and related hurdles as well as severe winter weather. Meanwhile, sick airline workers and winter storms have led to thousands of cancelled or delayed flights since the holiday season.

Crews Work to Reunite Bags With Passengers Amid Flight Disruption

Winter weather and staffing shortages due to COVID have hit air travel this holiday season. A local reporter at Seattle-Tacoma International Airport showed one of the results – piles of bags waiting to be reunited with their owners. (Credit: @choeshow via Storyful)

Janet Woodcock, the acting head of the U.S. Food and Drug Administration, told Congress on Tuesday that the highly transmissible omicron strain will infect "most people" and that the focus should turn to ensuring that critical services can continue uninterrupted.

"I think it’s hard to process what’s actually happening right now, which is: Most people are going to get COVID, all right?" Woodcock said. "What we need to do is make sure the hospitals can still function — transportation, other essential services are not disrupted while this happens."

The administration has also vowed to send 10 million more COVID-19 tests to schools each month in an effort to keep them physically open as it faces criticism over long lines and supply shortages for testing. On Wednesday, the White House announced that it will send 5 million rapid tests and 5 million lab-based PCR tests to K-12 schools, with the first shipments being delivered in late January.

The additional rapid tests are intended to help support screening testing and "test to stay" programs, in which schools use regular rapid testing to keep students, teachers and staff who come in close contact with those who test positive in the classroom, according to a White House statement.

The administration said it is increasing lab capacity to support the additional PCR tests per month for schools to perform individual and pooled testing in classrooms.

"Students have sacrificed so much over the course of the pandemic, and the President has been clear in his words and his actions that his Administration will do all that it can to keep schools safely open for all students," the White House statement reads.

The U.S. will also send millions of more free COVID-19 tests to Americans and has awarded its first contracts as part of the pledge. People will use a new website to order their tests, which will then be sent to them by the U.S. Postal Service. Administration officials have said the first batch of tests would be shipping this month.