WASHINGTON (AP) - President Joe Biden told Israeli Prime Minister Naftali Bennett on Friday that diplomacy was his first option, but he would consider other options if his effort to revive the Iran nuclear deal fails.

Biden made the comments as the two sat down for their first face-to-face meeting since Bennett was sworn-in as prime minister in June.

"We're putting diplomacy first and seeing where that takes us," Biden said during an Oval Office meeting that was delayed by the suicide bomb attack in Afghanistan. "But if diplomacy fails, we're ready to turn to other options."

Bennett arrived at the White House aiming to dissuade Biden from returning to the Iran nuclear deal that was brokered during the Obama administration and later scrapped by President Donald Trump.

Since the U.S. withdrawal from the deal in 2018, Tehran over time has abandoned every limitation the accord imposed on its nuclear enrichment. The country now enriches a small amount of uranium up to 63%, a short step from weapons-grade levels, compared with 3.67% under the deal. It also spins far more advanced centrifuges and more of them than were allowed under the accord, worrying nuclear nonproliferation experts even though Tehran insists its program is peaceful.

Bennett said he came with his own strategy to thwart Iran's nuclear ambitions that he would discuss in private with Biden. He expressed satisfaction that the two leaders were in sync on the notion that Iran should never be allowed to have a nuclear weapon.

"Iran is the world’s number one exporter of terror, instability, and human rights violations," Bennett said. "And as we sit here right now the Iranians are spinning their centrifuges in Natanz and Fordo. And we got to stop it, and we both agree."

The meeting, originally scheduled for Thursday, was postponed for one day as Biden focused his attention on dealing with the aftermath of a suicide bomb attack at the Kabul airport that killed 13 U.S. troops.

The two spoke by phone Thursday evening, with the Israeli leader offering Biden condolences. In their Oval Office meeting, Bennett again offered his condolences over the loss of U.S. service members. 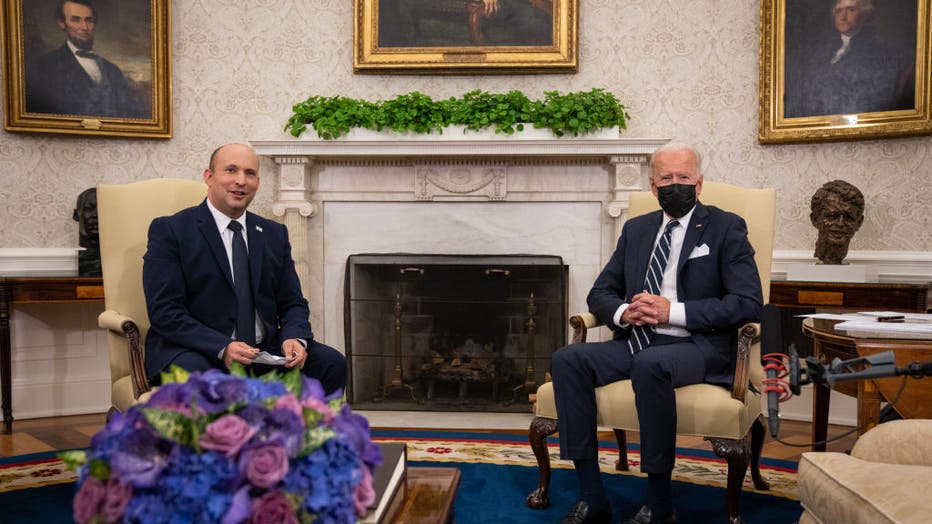 Bennett made clear his opposition to an Iran deal, arguing that Tehran has already advanced in its uranium enrichment and that sanctions relief would give Iran more resources to support Israel’s enemies in the region.

"These very days illustrate what the world would look like if a radical Islamic regime acquired a nuclear weapon," Bennett said. "That marriage would be a nuclear nightmare for the entire world."

The Israeli leader met separately Wednesday with Secretary of State Antony Blinken and Defense Secretary Lloyd Austin to discuss Iran and other issues. The visit is his first to the U.S. as prime minister.

Bennett told his Cabinet before the trip that he would tell the American president "that now is the time to halt the Iranians, to stop this thing" and not to reenter "a nuclear deal that has already expired and is not relevant, even to those who thought it was once relevant."

Biden has made clear his desire to find a path to salvage the 2015 landmark pact negotiated by the Obama administration. But indirect talks between the U.S. and Iran have stalled and Washington continues to maintain crippling sanctions on the country as regional hostilities simmer.

Raisi, 60, a conservative cleric with close ties to Supreme Leader Ayatollah Ali Khamenei, has suggested he'll engage with the U.S. But he also has struck a hard-line stance, ruling out negotiations aimed at limiting Iranian missile development and support for regional militias — something the Biden administration wants to address in a new accord.

Administration officials acknowledged that Iran’s potential "breakout" — the time needed to amass enough fissile material for a single nuclear weapon — is now down to a matter of months or less.

But a senior administration official, who spoke on condition of anonymity ahead of the talks, said the administration sees the maximum pressure campaign employed by the Trump administration as having emboldened Iran to push ahead with its nuclear program.

Bennett is also looking to turn the page from his predecessor, Benjamin Netanyahu.

Netanyahu had a close relationship with Trump after frequently clashing with President Barack Obama. Biden, who noted Friday that he has met with every Israeli prime minister since Golda Meir, had his own tensions with Netanyahu over the years.

Biden and Bennett also have their differences. Bennett opposes the creation of a Palestinian state and supports expansion of settlements in the West Bank, which Biden opposes.

The two sides played down the Palestinian issue Friday in an apparent attempt to avoid any public friction at this early stage of their relationship.

Given the poor prospects for progress in diplomatic talks with the Palestinians, both men appeared to be more interested in shoring up the new Israeli government in their first in-person talks.