WILMINGTON, Del. - President-elect Joe Biden expressed his "deep sympathy" to the family of the U.S. Capitol Police officer who died in the violent siege of the building by supporters of President Donald Trump and vowed those responsible will be held accountable.

"Our sympathies and our concerns go out to his family, and the people responsible should be held accountable — and they will be," Biden said during an event Friday in Wilmington, Delaware, to introduce additional key nominees of his economic and jobs team.

U.S. Capitol Police said Officer Brian Sicknick, 42, was responding to the mob who swarmed the Capitol and violently clashed with police. The attack upended a joint session of Congress to tally the Electoral College votes to confirm Biden’s win and forced the building into lockdown.

Sicknick, who joined the U.S. Capitol Police department in 2008, was injured while physically engaging with protesters, police said. Sicknick returned to his division office where he collapsed. He was transported to a local hospital where he later died from injuries sustained while on-duty, police said.

The death will be investigated by the Metropolitan Police Department’s Homicide Branch, the USCP, and federal law enforcement.

Four other deaths were reported, including a woman shot by Capitol Police while the rioters were moving toward the House chamber. Three others had medical emergencies and died during the storming of the Capitol.

During Friday’s event, Biden also rounded out his economic team by announcing the nominations of Boston Mayor Marty Walsh as labor secretary, Rhode Island Gov. Gina Raimondo as commerce secretary and Isabel Guzman as administrator of the Small Business Administration.

Biden, who has now selected individuals to fill all Cabinet-level positions, touted the nominees as people "who look like America" and ready to do their job "on day one."

"It taps into the full range of talent we have in our nation," Biden said. "This will be the first cabinet ever that is evenly composed with as many women as men." 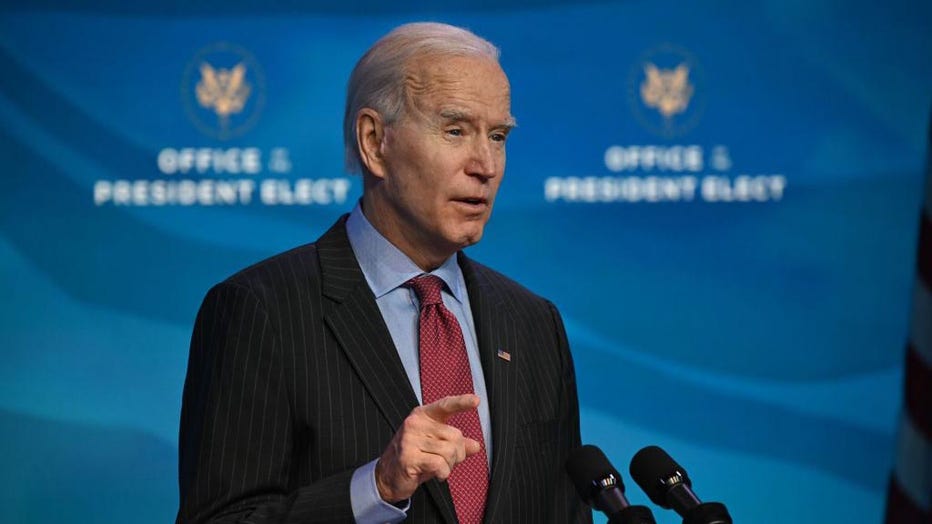 President-elect Joe Biden speaks at The Queen theater in Wilmington, Delaware on Jan. 8, 2021, to announce key nominees for his economic and jobs team. (Photo by JIM WATSON/AFP via Getty Images)

He called on the Senate to "promptly and fairly" confirm his slate of Cabinet picks, stating that "we have no time to lose" as the coronavirus pandemic continues to inflict pain on the nation’s health and economy.

"Given what our country’s been through the last four years and the few days, given the threats and the risks in this world, they should be confirmed as close to Jan. 20 as possible," Biden added.

RELATED: US reports over 4,000 daily coronavirus deaths for first time