Gen. Milley: No evidence of Afghan collapse in 11 days I LiveNOW from FOX

Joint Chief Chair Gen. Milley spoke with Secretary of Defense Austin about the evolving situation in Afghanistan. During the briefing, Gen. Milley said the 'rapid collapse' scenario by U.S. intelligence was weeks, months or even years.

WASHINGTON - The Taliban may have overthrown the internationally recognized Islamic Republic of Afghanistan, but it appears chaos is the de facto ruler of the mountainous central Asian country — and President Joe Biden said it was bound to happen.

The United States is rapidly trying to evacuate American citizens and Afghans who aided the American war effort over the last 20 years. Mobs of refugees have stormed the Kabul airport, chasing planes on the runway, desperate to get beyond the Taliban’s reach.

The 300,000 or so Afghan troops meant to protect them largely put down their arms and deserted. And the president meant to govern them fled the country as the Taliban marched on the capital.

Biden, who committed to withdrawing the U.S. troops, said in an interview Wednesday that chaos was unavoidable.

Last year, the Trump administration signed an agreement with the Taliban to withdraw American troops by May 1, 2021. Biden, who has been a proponent of ending the War in Afghanistan for more than a decade, missed that deadline, but he committed to being out of the country by Sept. 11.

When American and allied forces began to draw down their presence, the Taliban began their conquest. City by city, the hardline Islamist group came into power, culminating with the fall of Kabul on Sunday.

Since then, Taliban fighters have revived the Islamic Emirate of Afghanistan, the official name of the partially recognized government that ruled the country in the 1990s.

They’ve conducted something like a PR campaign in an apparent bid to reinvent the group on the global stage. The Taliban vowed Tuesday to respect women's rights, forgive those who fought them and ensure Afghanistan does not become a haven for terrorists as part of a publicity blitz aimed at reassuring world powers and a fearful population.

But Biden said troops are having a harder time evacuating those who helped the U.S. in the war.

The Taliban have erected roadblocks and checkpoints around Kabul, making it harder to get to the airport. And the U.S. is not currently providing American citizens with safe transport to the airport.

"Look, one of the things we didn't know is what the Taliban would do in terms of trying to keep people from getting out," Biden said. "What they would do. What are they doing now? They're cooperating, letting American citizens get out, American personnel get out, embassies get out, et cetera, but they're having — we're having some more difficulty having those who helped us when we were in there."

The evacuation effort had removed 3,200 people by Tuesday. Officials hope to be able to evacuate 9,000 people a day.

The comments come as the Biden administration has faced sharp criticism for the timing and direction of the Afghanistan withdrawal, after the Taliban came to power more quickly than administration officials predicted. The swift takeover by the Taliban prompted scenes of chaos and violence as thousands of Afghans and Americans sought to flee the country.

Biden also pushed back against concerns about the treatment of women and girls in the country, arguing that it’s "not rational" to try to protect women's rights around the globe through military force. Instead, it should be done through "diplomatic and international pressure" on human rights abusers to change their behavior.

Up to 15,000 Americans remain in Afghanistan after the Taliban took full control of the nation last weekend. Biden said during the same interview that he's committed to keeping U.S. troops in Afghanistan until every American is evacuated, even if that means maintaining a military presence beyond his Aug. 31 deadline for withdrawal.

Pressed repeatedly on how the administration would help Americans left in the nation after Aug. 31, Biden said, "If there’s American citizens left, we’re gonna stay till we get them all out."

Defense Secretary Lloyd Austin said earlier Wednesday that the U.S. military does not have the forces and firepower in Afghanistan to expand its current mission from securing the Kabul airport to collecting Americans and at-risk Afghans elsewhere in the capital and escorting them for evacuation. 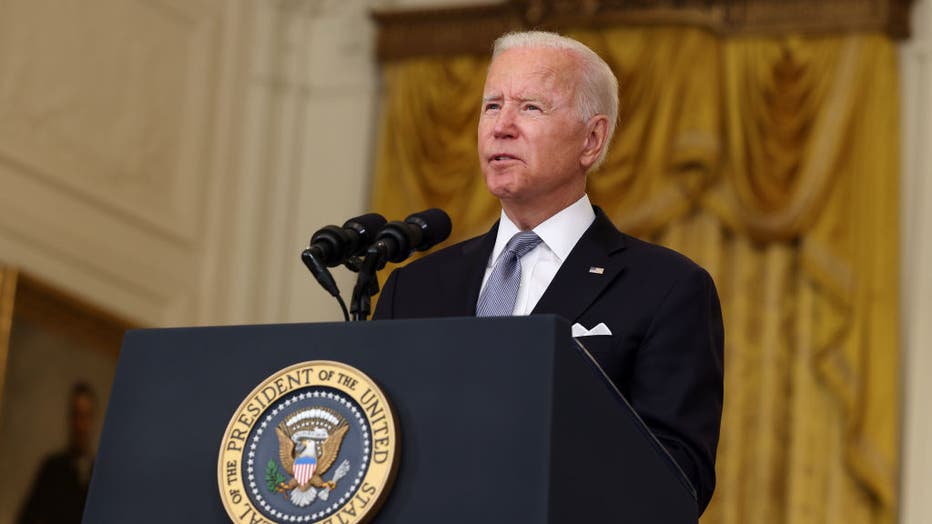 U.S. President Joe Biden delivers remarks on the worsening crisis in Afghanistan from the East Room of the White House on Aug. 16, 2021, in Washington, DC. (Photo by Anna Moneymaker/Getty Images)

The question of whether those seeking to leave the country before Biden’s deadline should be rescued and brought to the airport has arisen amid reports that Taliban checkpoints have stopped some designated evacuees.

"I don’t have the capability to go out and extend operations currently into Kabul," Austin said. "And where do you take that? How far do you extend into Kabul, and how long does it take to flow those forces in to be able to do that?"

Austin, a retired four-star Army general who commanded forces in Afghanistan, spoke at his first Pentagon news conference since the Taliban swept to power in Kabul on Sunday.

He said the State Department was sending more consular affairs officers to speed up the processing of evacuees.

"We’re not close to where we want to be" in terms of the pace of the airlift, Austin said.

"We should be focusing on where the threat is the greatest," Biden said. "And the idea we can continue to spend a trillion dollars, and have tens of thousands of American forces in Afghanistan, when we have North Africa and Western Africa — the idea we can do that and ignore those looming problems, growing problems, is not rational."

This story was reported from Atlanta. The Associated Press contributed.