Nate’n Al delicatessen closing after 75 years, at least for now

The famed Nate 'n Al's delicatessen is closing its doors after 75 years.

BEVERLY HILLS, Calif. - The popular Nate'n Al delicatessen will close on Sunday after being in business on North Beverly Drive in Beverly Hills since 1945 with a clientele including many entertainment industry legends.

Like all California restaurants, Nate'n Al has been barred from having customers dine at its establishment following local and state stay-at-home orders issued earlier this month because of the coronavirus pandemic.

Nate'n Al will take orders for takeout and delivery Sunday "until we sell out of product,'' the restaurant tweeted.

People wanting to order food must call 310-274-0101. No walk-ups are being allowed. Multiple people reported a high call volume on Twitter.

"Approximately one month ago the world as we knew it changed,'' the statement said. "We had hoped that we could continue our take out and delivery service so that we could provide the community with the food that has been a part of our lives for years. However, our number one priority is to keep our customers and our staff safe and secure during this time of uncertainty. After reviewing all the
variables, we no longer feel confident that we can do that. It is with great sadness that we will be closing our doors for all business as of tomorrow, Sunday, March 29th at 8 p.m."

The Mendelson family sold it in 2019 to entertainment executive Irving Azoff and his wife, Shelli, both long-time customers. They had planned to move it from 414 N. Beverly Drive one block east to the former site of Wolfgang's Steakhouse at 445 N. Canon Drive. 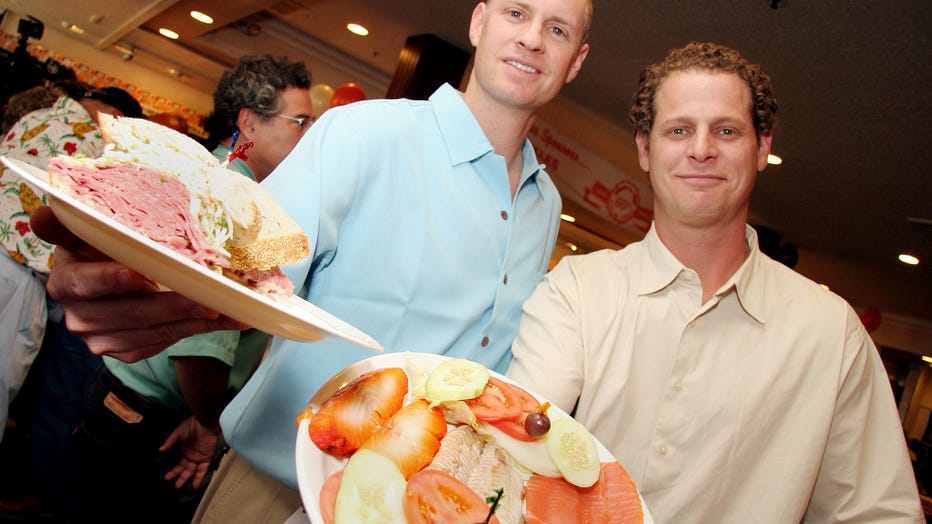 BEVERLY HILLS, CA - MAY 24: Restaurant owners Mark and David Mendelson at a party celebrating the 60th anniversary of Nate 'N Al's deli on May 24, 2005 in Beverly Hills, California. (Photo by Marsaili McGrath/Getty Images)

Nate'n Al has long been frequented by Hollywood executives and personalities, including talk show host Larry King, who used to eat breakfast there nearly every morning. The late Oscar-winning actor Gregory Peck told City News Service in the late 1980s that he would pull up to the rear of the restaurant every weekend to pick up a takeout order.

"Nooooooooo! Nate'n Al's is closing!!!??? This is the deli I grew up with!'' Laraine Newman, an original "Saturday Night Live'' cast member, tweeted.

"The best in Los Angeles. The deli where I saw Danny Kaye when I was 12 and he winked at me!!! Nooooo!''

Beverly Hills Mayor John Mirisch called the closure of Nate'n Al "nothing short of devastating for our entire community.'' He told City News Service "after 75 years, it is beyond sad to see it go with a whimper like this.''

"Maybe more than any other venue in our city, Nate'n Al was a place where we all could meet, no matter what part of the city you lived in,'' said Mirisch, who was raised in Beverly Hills and recalled going to Nate'n Al with his grandparents as a youth and bringing his son there in recent years.

"In some respects, it was even more important than City Hall, because it was our city's de facto town square -- and you can't get a good bagel and lox at City Hall either.''

Mirisch expressed his hope that "if the current owners of the business aren't willing to reopen after we get through the pandemic, it is my hope that someone else might step up to reopen this local community treasure.''