Police are searching for a hit-and-run motorcyclist who struck a 6-year-old boy riding a scooter in Sylmar over the weekend.

SYLMAR, Calif. - Police are searching for a hit-and-run motorcyclist who struck a six-year-old boy riding a scooter in Sylmar.

The boy was riding his scooter around 6:30 p.m. Saturday near Cobalt Street and Encinitas Avenue, when a motorcyclist, traveling westbound on Cobalt Street, struck him, according to the Los Angeles Police Department.

After hitting the boy, the motorcyclist picked up his motorcycle, which was laying on the road, and put his helmet on to flee the scene, leaving the injured boy without rendering aid, police said.

The boy was taken to a hospital, where his vital signs were listed as stable, according to police.

On Wednesday, police released new images of the suspect… hoping it would lead to his arrest.

The suspect is described as Hispanic, 20 to 28 years old and 5-foot-6, with black hair. 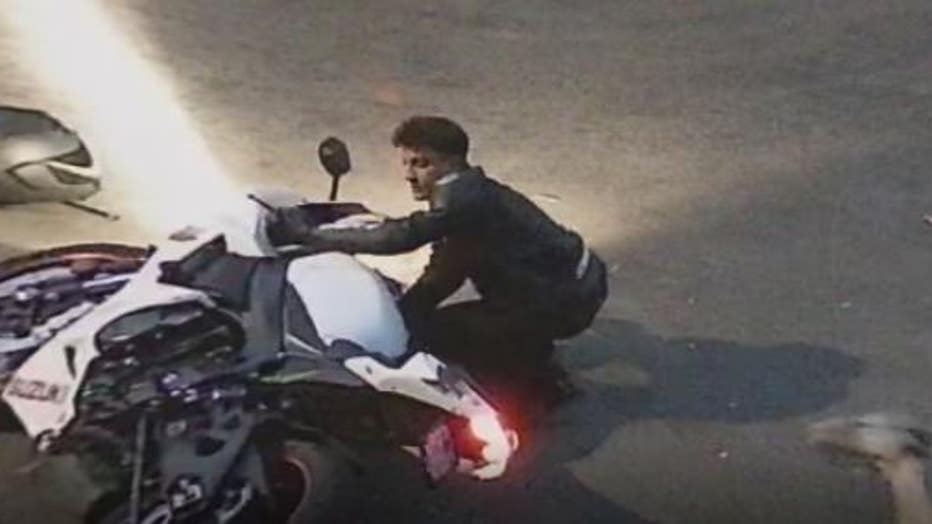 A $25,000 reward, from the Hit and Run Reward Program Trust Fund, is available for anyone providing information leading to the suspect identification and conviction.

Those with information are urged to contact Valley Traffic Investigator, Officer Garcia at 818-644-8117.

Tipsters reporting during non-business hours can call 1-877-LAPD-24-7. Those wishing to report anonymously can call Crime Stoppers at 800-222-TIPS.