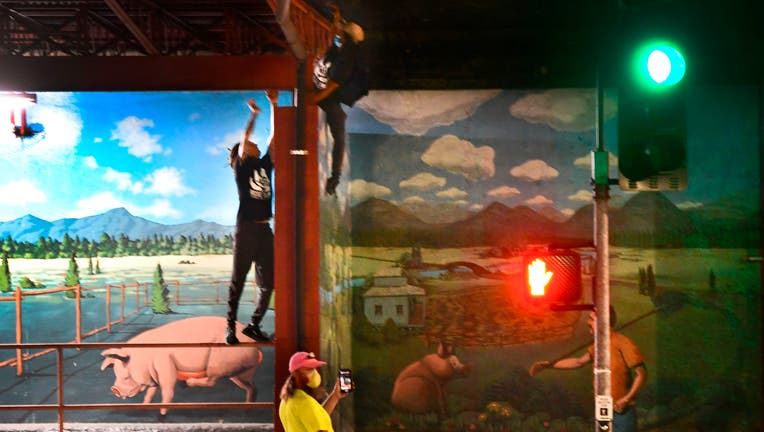 Animal rights activists start their climb onto the roof of the Farmer John slaughterhouse and processing plant in Vernon, an industrial city five miles south of downtown Los Angeles on September 28, 2020. - A banner reading "Fight to Rescue" was unfu (Getty Images)

VERNON, Calif. - Some 26 animal rights activists were arrested overnight Tuesday as they attempted to shut down operations at the Farmer John slaughterhouse in Vernon.

Six people were arrested on suspicion of trespassing for entering the facility, while another 20 were arrested for alleged public nuisance for blocking trucks from delivering pigs to the plant, according to Direct Action Everywhere, whose Los Angeles chapter hosted the event.

The group said all 26 were released from custody as of Tuesday morning. Vernon police could not immediately confirm the arrests, but a live video streamed on DXE's Facebook page late Monday and early Tuesday showed some of the activists being taken into custody.

The group said four people chained themselves to some of the slaughter machinery while two people went to the roof of the plant an unfurled large animal rights banners.

The action was part of a 48-hour vigil outside the plant meant to call attention to what activists say is Farmer John's inhumane treatment of animals, as well as the larger issue of factory farming and its alleged harmful effects on the environment and public health.

DXE spokeswoman Cassie King told City News Service that the group was able to successfully prevent trucks from entering the facility through much of the vigil.

Thousands of pigs are normally trucked into the facility each day, where they are killed and turned into Dodger Dogs, as well as ham, bacon, sausage and hot dogs sold under the Farmer John label.

Smithfield Foods -- owner of Farmer John -- could not be immediately reached to confirm the disruptions.

The company did respond to an incident Friday, when seven DXE activists were arrested for trying to rescue a pig from the facility.

"A Smithfield facility in Vernon, Calif., was recently targeted by an extremist animal rights group that has no regard for the law. In this instance, after a criminal break-in, the activists endangered the safety of personnel and violated standards of animal care," the company said. "These tactics are aimed at forcing a vegan agenda on Americans in a smear campaign that disregards facts, relies on a false narrative and promotes a slanted agenda aimed at eradicating animal agriculture. This criminal behavior is despicable."

Smithfield added the following statement Monday: "Our commitment to animal care, food safety, and our team members is uncompromising."

The DXE activists planned to conclude their two-day vigil with a news conference Tuesday morning at Grand Park, where they will call on Los Angeles officials to pass a moratorium prohibiting the construction of new factory farms or slaughterhouses as a first step to enacting an animal bill of rights.

"DXE, along with dozens of other organizations, is calling on Governor Newsom to proactively prevent future pandemic outbreaks by issuing an executive order moratorium prohibiting the construction of new factory farms and slaughterhouses in the state," a group statement said. "They cite a similar (New Jersey Sen.) Cory Booker proposal as an indication of both the urgency and public support for bold action, as well as a recent survey finding 68% support among Californians. They see such a move as a necessary first step toward an animal bill of rights they call Rose's Law."

DXE's Matt Johnson told City News Service that "incremental improvements to the company's harms to workers, animals and the environment are better than nothing, but the urgency of this moment calls for much bolder action. We're calling on government and industry leaders to create a more just food system by transitioning away from animal agriculture altogether."

During the vigil, which begin at 11 a.m. Sunday, volunteers camped out, providing the public and workers with information on Rose's Law -- a proposed animal bill of rights -- and how to submit reports of abuse to a whistleblower support program. They also scribbled messages of support for animals on the sidewalk in chalk.

The group said all participants in the vigil were following COVID-19 safety guidelines, including wearing masks at all times, observing social distancing, using hand sanitizer and disinfectant wipes, and disinfecting shared surfaces such as megaphones.

On Friday, police received a call from officials at Smithfield Foods --  owner of Farmer John -- to report that some trespassers were on the premises at 3049 E. Vernon Ave., according to Vernon Police Sgt. Daniel Onopa.

"Two subjects were determined to be inside the livestock yard and five subjects fled on foot," Onopa said. "They (the five subjects) were then detained by officers nearby. Due to the pandemic, they were cited at the scene and released."

DXE Los Angeles posted a video on its Facebook page showing activists wearing hardhats inside the facility. The group places a pig on a gurney and attempts to leave, but police are shown outside and a voice is heard saying, "they're locking the doors, guys."

"I don't know the exact details about that," Onopa said. "There's still pending, further investigation that I can't comment on."

Johnson said the group was unable to rescue the pig, who they assume was killed.

The group identified the seven activists as Emek Echo, Lewis Bernier, Alicia Santurio, Rachel Hosler, Zoe Rosenberg, Robert Franklin and Alexandra Paul. Paul is an actress best known for a starring role in the 1983 horror film, "Christine," and a role on the TV series "Baywatch" from 1992-97.

"Smithfield will do anything to keep making money, from torturing pigs to endangering its workers' lives," she said. "We took nonviolent direct action because lives are at stake."

The animal rights group said the seven entrants managed to retrieve a hidden camera previously planted in the facility with 81 hours of footage of the slaughter line, "the first time public footage has been obtained from inside the slaughterhouse."

Earlier this year, the Farmer John slaughterhouse experienced a large COVID-19 outbreak, in which 153 workers tested positive for the disease.