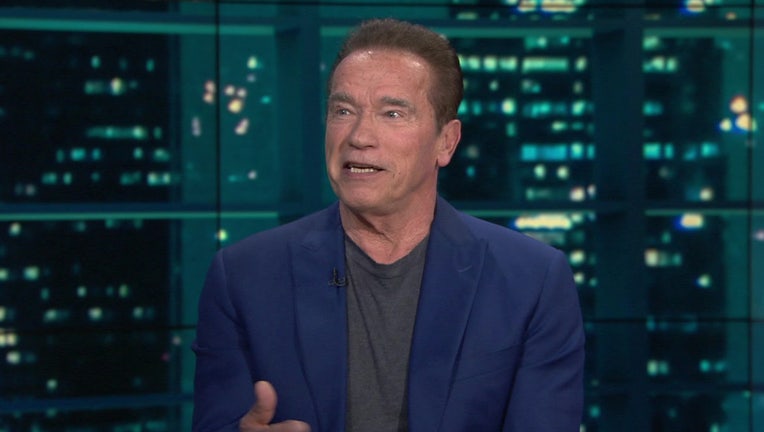 The former California governor said Shriver called him after watching the film. She told him: "All of a sudden, there's his naked butt!"

Schwarzenegger said watching that on the big screen was "wild...it's an experience and a half."

He said he couldn't be prouder of his son's talent.

"His acting was so extraordinary, he's so talented," he said. "He's working his way up and he's getting the starring roles."

Schwarzenegger is especially grateful that so many of Patrick's co-workers have complimented his kindness.

"They tell me, 'Arnold, you have the nicest son. He's so well prepared."

Schwarzenegger said all of his kids are finding success in their own right. His daughter Katherine is a successful author and recently married actor Chris Pratt. Daughter Christina is the producer of "Take Your Pills" on Netflix.

Son Christopher is studying psychology at the University of Michigan.

"What a smart kid! He's much smarter than I am," Arnold said of Christopher.

Arnold also has a good relationship with his son, Joseph, whose mom is Mildred Baena. Like his father, Joseph is accomplished in bodybuilding. "He's a fanatic in the gym!"

Joseph, he said, is interested in acting and real estate.

"I'm proud of all my kids!" Arnold boasted.

Schwarzenegger joined FOX 11's Elex Michaelson for an exclusive, 30-minute sit-down interview. They discussed climate change, election reform, after school programs, and more on "The Issue Is: with Elex Michaelson."