President Joe Biden appeared in Philadelphia, Pennsylvania, to speak about voting rights amid fights in multiple states including Georgia and Texas over voter suppression bills. Biden called it a bipartisan issue, arguing that Americans have to come together to protect democracy and the right to vote in fair and free elections.

PHILADELPHIA - President Joe Biden traveled to Philadelphia on Tuesday to deliver a speech on voting rights as he faces pressure to combat efforts of Republican-led state legislatures seeking to pass measures restricting access to the ballot.

Biden gave remarks at the National Constitution Center, a museum devoted to the Constitution located in the birthplace of U.S. democracy. The White House has faced growing pressure from civil rights activists and other Democrats for not doing more to protect voting rights, even as Biden has declared the issue a central cause of his presidency.

Several U.S. states have enacted voting restrictions, and others are debating them, as Republicans have seized on former President Donald Trump’s false claim of massive voter fraud in the 2020 election as a pretense for curtailing ballot access.

Biden referred to this effort by Republicans to add voting restrictions a part of Trump’s "big lie" that he called "authoritarian and anti-American."

"The 2020 election was the most scrutinized election ever in American history. Challenge after challenge brought to local, state and election officials, state legislatures, state and federal courts, even to the United States Supreme Court not once, but twice. More than 80 judges, including those appointed by my predecessor, heard the arguments. In every case neither cause nor evidence was found to undermine the national achievement of administering the historic election in the face of such extraordinary challenges," Biden said.

Democrats in Congress have tried to respond with a sweeping voting and elections bill that Senate Republicans united to block. Most Republicans have similarly dismissed a separate bill, the John Lewis Voting Rights Advancement Act, which would restore sections of the Voting Rights Act that the Supreme Court previously weakened.

"He’ll lay out the moral case for why denying the right to vote is a form of suppression and a form of silencing," White House press secretary Jen Psaki said Monday as she previewed the speech. "He will redouble his commitment to using every tool at his disposal to continue to fight to protect the fundamental right of Americans to vote against the onslaught of voter suppression laws." 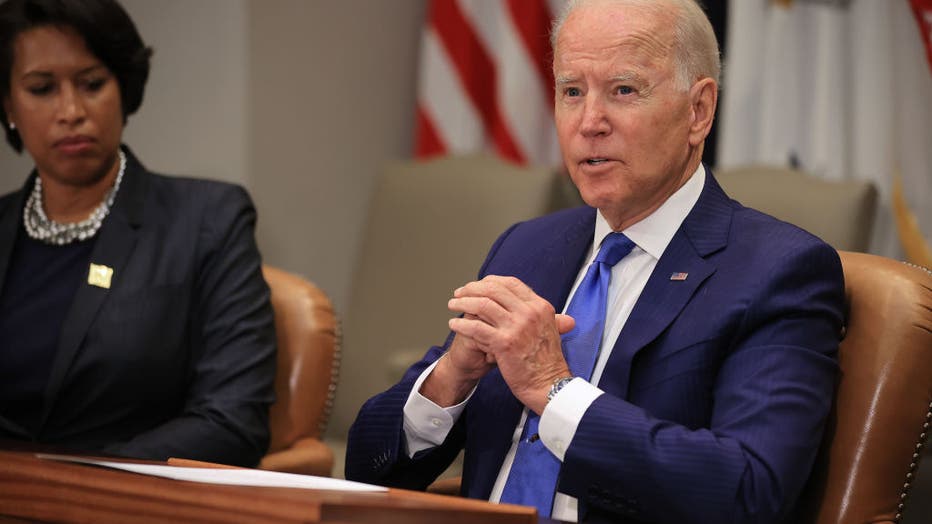 Legislative roadblocks have increased focus on the Senate filibuster, which, if left in place, would seem to make passing the pair of voting rights overhaul measures pending in Congress unlikely. Republicans have been unanimous in their opposition, and it would take the elimination or at least modification of the filibuster for the bills to have a chance at passage.

Moderate Democrats like Sen. Joe Manchin of West Virginia and Sen. Kyrsten Sinema of Arizona so far have expressed reluctance to changing the Senate tradition. The voting bills have little other chance of passage in a body that is a 50-50 deadlock, with Vice President Kamala Harris breaking the tie.

Biden, a 36-year veteran of the Senate, has offered some support for filibuster changes but has not put his political weight behind the issue. He and Harris, who is leading the administration’s efforts on voting rights, met last week with some of the civil rights leaders, who made clear that they expected a legislative solution.

"Our backs are against the wall. This is the moment. We have no more time," said Sherrilyn Ifill, president of the NAACP Legal Defense Fund, after the meeting. "I told the president: We will not be able to litigate our way out of this threat to Black citizenship."

Vice President Kamala Harris visited Howard University, her alma mater, on July 8 where she spoke about the importance of protecting voting rights amid a Republican push to enact more restrictive voting laws.

Many Republicans continue to question the 2020 election’s outcome, despite the absence of evidence of fraud. Republican-elected officials in a number of states have responded by enacting restrictions on early voting and mailed-in ballots, as well as tougher voter identification laws, prompting some liberals to demand that Biden do more.

Democrats have stressed the new voting laws target minority voters, who are statistically more likely to vote in favor of the Democrats.

Harris last week announced $25 million in new spending by the Democratic National Committee on actions to protect voting access ahead of the 2022 midterm elections.

"This campaign is grounded in the firm belief that everyone’s vote matters. That your vote matters," Harris said while speaking at her alma mater at Howard University. "And we saw this in 2020 when more Americans turned out to vote than ever before in the middle of a pandemic."