Emotions are running high after that shooting of the two deputies. A controversial social media post by Lynwood's city manager is raising eyebrows.

His employment with the city is now under review.

The City Council has appointed Michelle Ramirez as acting citymanager.

Standing on a Lynwood street City Councilman Salvador Alatorre talks about the community's City Manager Jose Ometeoti and a social media post he put up after the shootings of two Sheriffs Deputies over the weekend.

Says the councilman, “I’m shocked and I believe that by that action the city manager is putting our community - put the safety of our community at high risk.”

The Instagram post shows a picture of Malcolm X and a controversial statement he made about the assassination of President John Kennedy with the words "Come home to Roost" which, in effect, means - what goes around comes around. 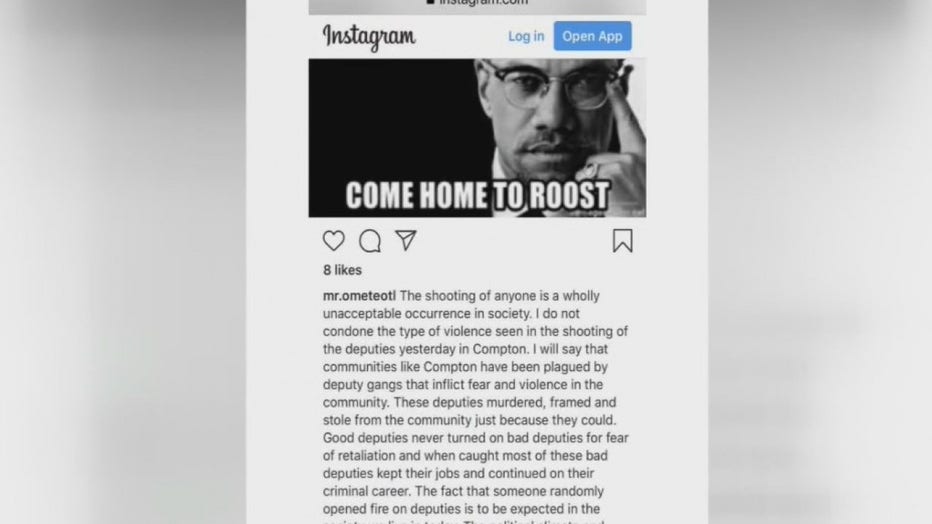 The City Manager condemns the shooting of the two deputies in Compton, but then goes on to say, “… communities like Compton have been plagued by deputy gangs that inflict fear and violence in the community.”

He says, “The fact that someone randomly opened fire on the deputies is to be expected in the society we live in today. He’s also critical of the leadership of Sheriff Villanueva accusing him of "sowing the seeds of anger and frustration in the community". He prays for the two wounded deputies while “still demanding justice for Andres Guardado, Breona Taylor, Tamir Rice and Ahmaud Arbery.”

A former Mayor and councilmember in Lynwood, Maria Santillan, told FOX 11 of the post, "When I read it my blood was boiled. I have a few family members who are law enforcement officers in the Sheriff's Department who are risking their lives to protect and serve our community. I was very upset over it.”

In a statement, the City of Lynwood said:

“There have been comments made Sunday by our City Manager on his personal social media that are his personal opinions and don’t reflect the position of the Lynwood City Council.”

But, to Councilman Alatorre, "... when you pay somebody close to a quarter-million-dollars they’re responsible 24 hours a day.”

Alatorre says that includes whatever the city manager puts in social media seen by anyone in the public. When asked if he wanted Jose Ometeoti fired he answered, "I do".

Tuesday at 5 p.m. the council will meet in closed session at Lynwood City Hall and then a public session at 6 p.m.

That's when Alatorre plans to raise a motion to terminate the city manager.