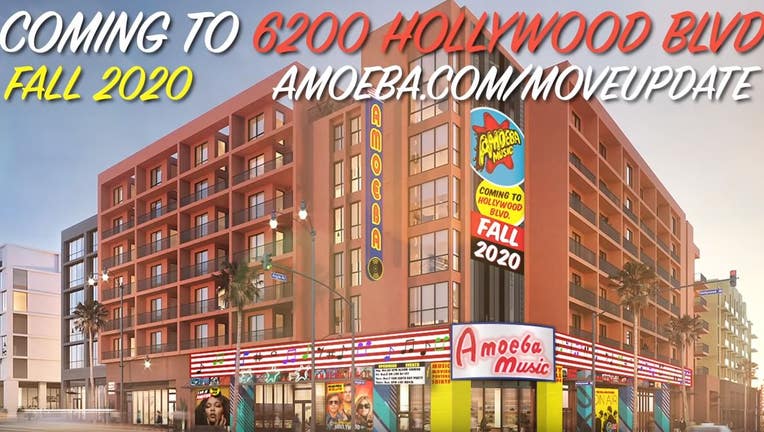 HOLLYWOOD, Calif. - Amoeba Music, which is losing its famed home on Sunset Boulevard to make way for a housing development project, announced plans to move to a new location on Hollywood Boulevard.

The store's new home will be at 6200 Hollywood Blvd., at Argyle Avenue, in the El Centro retail/residential complex. Amoeba officials posted a YouTube video featuring Tyler, The Creator, to make the official announcement.

"We have been blown away by the massive outpouring of support from our customers and the L.A. community throughout our search for a new home and are excited for the next chapter in the Amoeba story,'' Amoeba Music co-owner Jim Henderson said in a statement. "It has been a long search, but we're pleased to announce we found the right new home and are able to stay in the music and movie-loving heart of Hollywood.''

The store's new location is expected to be open this fall, although an exact date was not announced. According to the store's website, the new location will be slightly smaller, "but not a whole lot.''

City Councilman Mitch O'Farrell, who represents the Hollywood area, hailed the announcement that the store will be remaining in Tinseltown.

"I think I speak for most Angelenos when I say that we are thrilled that our beloved Amoeba Music is staying in Hollywood,'' he said. "My office worked to keep Amoeba in the neighborhood, and we are even more delighted to welcome the store to the Walk of Fame, which we are actively trying to enhance with my HEART of Hollywood initiative.''

The store was forced out of its previous location at 6255 Sunset Blvd. to make way for a planned housing development. According to the developer, the project will include 200 housing units in a 26-story, 7,000-square-foot building. Ten of the units, or 5%, are slated for affordable or "very low- income'' households.