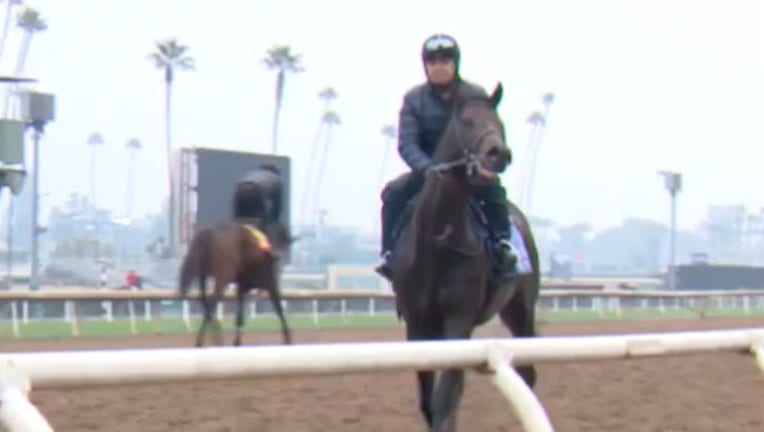 "There will be a lot of people from around the world watching, so naturally everyone involved in the sport realizes the importance to have no injuries whatsoever,'' said trainer Simon Callaghan, who has the 3-1 morning-line favorite in Friday's Breeders' Cup Juvenile Fillies race with Donna Veloce, who won her only start by more than nine lengths Sept. 28 at Santa Anita.

The two-day series will include 14 Breeders' Cup races with purse money totaling $28 million, with five of Friday's races featuring 2-year-old colts and fillies as part of "Future Stars Friday.''

Among the most highly anticipated races Friday is the $2 million Breeders' Cup Juvenile, which will pit the 8-5 morning line favorite, Dennis' Moment, against local contender Eight Rings. Both 2-year-old colts, who will face each other for the first time, have each won two out of their three races.

Eight Rings' trainer, Bob Baffert, said during a teleconference last week that the series of horse deaths at Santa Anita, the ensuing protests and the track's closure for nearly a month in March were a "wake-up moment for racing.'' But he said he didn't have any issues with the track and thinks "it's going to be a great Breeders' Cup.''

"We need some good things happening here in California,'' Baffert said. "... We're going to get some good, positive vibes out of this whole
thing (Breeders' Cup).''

Another trainer, Chad Brown, said the horse fatalities at Santa Anita have been "concerning, for sure, watching from afar from the East Coast.''

"Ultimately, I didn't avoid running any horses in the Breeders' Cup due to this issue,'' said Brown, who trains Bricks and Mortar and
Sistercharlie, the morning line favorites in two of the Breeders' Cup races Saturday.

"I did have a lot of questions from clients throughout the summer and right into the fall here about our plans, individual horses, about my
opinion on it,'' Brown said. "But ultimately we feel confident in Santa Anita's management that the track will be safe and I support everything they've been doing to try to improve the situation.''

Breeders' Cup's top executive, Craig Fravel, said Wednesday he believes "everything humanly possible'' has been done to try to prevent horses from being injured in the Breeders' Cup races.

Debbie Lamparter, the Breeders' Cup's veterinary team leader, added, "No horses racing anywhere have been more examined or observed than these horses. All of this is being done to ensure the best for the horse and to make sure that we have done our utmost for the safety of these horses.''

Such assurances, however, have done little to ease protests from animal-rights groups, at least one of which plans to protest outside Santa Anita Friday to call for an end to horse racing. Kitty Block, president/CEO of the Humane Society of the United States, issued a statement Thursday decrying the spate of horse deaths.

"While we've long recognized that some in the industry are trying to address the welfare of these horses, the rate at which they are dying is deplorable,'' Block said. "We continue to work with industry leaders to secure passage of the federal Horseracing Integrity Act to ban race-day medication, which would significantly decrease racehorse deaths and rid the sport of cheaters who place winning before horse welfare.''