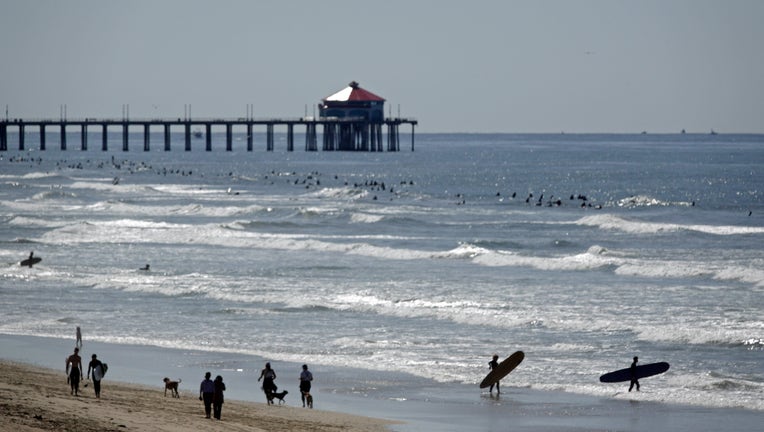 HUNTINGTON BEACH, CA - MARCH 28: People are seen along the beach in front of the pier on March 28, 2020 in Huntington Beach, California. California Governor Gavin Newsom issued a ‘stay at home’ order on March 19 for California’s 40 million residents,

No information was released about the most recent death.

The number of hospitalized patients increased to 112 from 103 on Friday, including 71 patients in intensive care, according to the Orange County Health Care Agency.

As of Saturday, 9,797 people had been tested for COVID-19 in the county, with enough tests for 990 more people.

Anaheim has the most cases in the county with 74, followed by Irvine and Newport Beach with 70 each.

Two cases include Orange County sheriff's deputies. One of the deputies worked at the Theo Lacy jail in Orange and the other one at the main jail in Santa Ana. Both men are resting at home, said Carrie Braun, a spokeswoman for the Orange County Sheriff's Department.

Co-workers and inmates who came into contact with the deputies were being alerted. The co-workers were being told to quarantine themselves if they feel they have symptoms, and officials are monitoring the inmates, Braun said.

There are a dozen inmates in "medical isolation,'" and 175 in a "medical quarantine," Braun said. The number of inmates testing positive for coronavirus remains at five, she added.

Medical isolation is for those who are sick or showing symptoms, and the quarantine is for inmates potentially exposed to someone else with COVID- 19.

Orange County Supervisor Andrew Do on Tuesday implored residents to stay at home as much as possible to stem the tide of the pandemic.

"Social distancing and isolation is no longer a debate," Do said.

Stay-at-home orders in other countries have lessened the spread of the disease, Do said, adding that Orange County residents might not know for weeks or months how effective their efforts have been. "But we can do more than hope for the best," he said.

Do noted he had received multiple text messages and photos of large groups of people gathering last weekend in violation of the social-distancing recommendations.

"I have even heard of people hosting coronavirus parties," Do said.

Do pointed out that "Just because you don't feel sick, doesn't mean you're not sick," referring to the incubation period of the virus before symptoms flare up.

Calls for help have been flooding the county's social services agencies, officials said at a news conference Thursday.

The county's office on aging has received more than 2,000 calls,"roughly six times the usual call volume this week," said Dylan Wright, director of OC Community Resources, who encouraged residents to check in on elderly neighbors.

County officials plan to call 500,000 seniors this week to check in on them, Wright said. Frozen meals are being delivered twice a week instead of daily to help reduce the amount of contact, he said.

Debra Baetz, director of the county's Social Services Agency, said the agency has seen a 65% increase in call volumes for various types of public aid. In the past two weeks, the agency has received more than 12,000 applications for public assistance programs, "which is a drastic increase," Baetz said.

On the issue of whether people should wear face masks, Orange County Health Officer Dr. Nichole Quick discouraged residents from seeking out surgical masks or N95 masks, which are in short supply and badly needed by healthcare workers. Instead, Quick recommended any sort of face covering, including scarves and bandannas, because they can be effective in cutting down the spread of the virus, though people should still stay at home and practice social distancing.