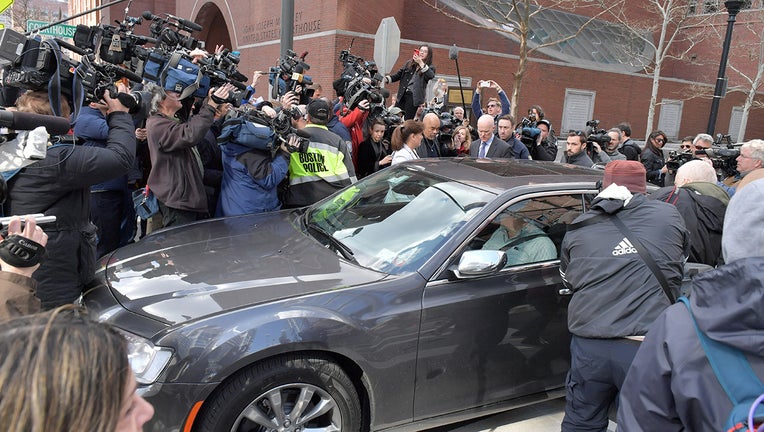 Jane Buckingham, 50, of Beverly Hills; Robert Flaxman, 62, of Laguna Beach; and Marjorie Klapper, 50, of Menlo Park; each pleaded guilty in Boston to a single count of conspiracy to commit mail fraud and honest services mail fraud.

Buckingham, a marketing executive, admitted in her plea deal that she agreed to pay $50,000 to Newport Beach businessman William Rick Singer, the admitted ringleader of the cheating scandal, to have her son's score on a college-entrance exam doctored.

Flaxman, a developer, admitted that he agreed to pay Singer $75,000 to have his daughter's exam score doctored.

Prosecutors agreed in all three cases to recommend sentences on the low end of the federal guidelines. For Buckingham and Flaxman, that could mean prison sentences of between eight and 14 months. Both will be subject to a $40,000 fine.

Earlier this month, "Desperate Housewives" actress Felicity Huffman pleaded guilty to a federal conspiracy charge for paying $15,000 to have a proctor correct her daughter's answers on a college-entrance exam.

In her case, prosecutors are expected to recommend that she serve four months in prison, pay a $20,000 fine and spend a year on supervised release after her prison time. Her sentencing is set for Sept. 13.

"Full House" actress Lori Loughlin is still facing charges for allegedly having her daughters admitted to USC as crew recruits, even though neither has ever participated in the rowing sport. She has not struck a plea deal with prosecutors and was recently indicted on an additional money-laundering conspiracy charge that could lead to a more extensive prison sentence.

Dozens of parents and college athletic coaches were implicated in the nationwide bribery scandal, in which wealthy parents paid Singer thousands of dollars to have their children's entrance-exam scores doctored. In other cases, students were falsely admitted to elite universities as athletic recruits, even though they never had any experience in the sports for which they were being recruited, prosecutors said.