LOS ANGELES - Approximately 17 million gallons of untreated sewage spilled into the ocean over the weekend, prompting the closure of beaches between El Segundo and the Dockweiler RV Park, before reopening Wednesday.

The beaches remained closed for the third day in a row, officials said Wednesday.

How did this happen?

The sewage discharge was a result of excessive debris which caused a backup Sunday night at the Hyperion Treatment Plant.

According to a statement from Timeyin Dafeta, Hyperion Executive Plant Manager, the plant became inundated with overwhelming quantities of debris, causing backup of the headworks facilities. This caused the plant's relief system to be triggered and "sewage flows were controlled through the plant's one-mile outfall and discharge of untreated sewage into Santa Monica Bay".

The plant manager says during eight hours of discharge, approximately 17 million gallons of sewage was discharged. Dafeta says this was done in order to prevent the plant from going completely offline and discharging more raw sewage. 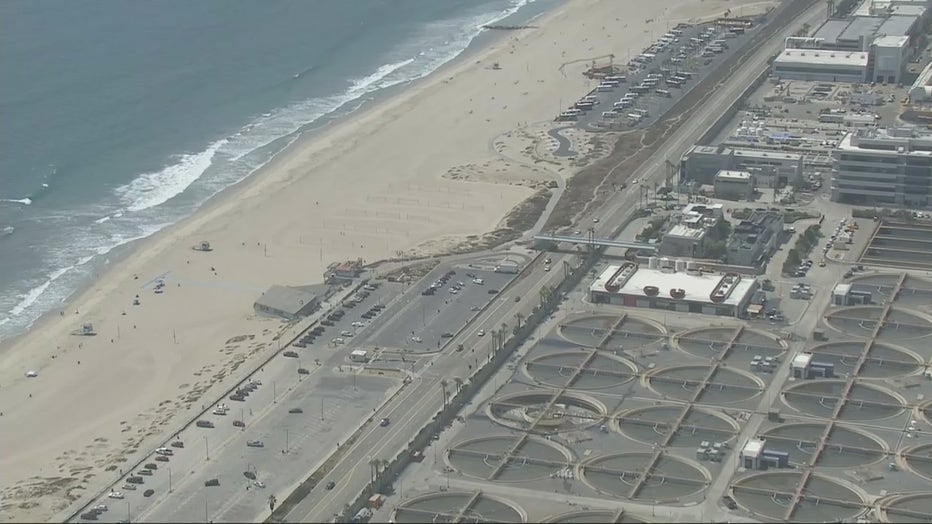 "Protocols for notifying regulatory agencies and the State's Office of Emergency Services were followed, plant staff was onsite all night and resolved the issue early this morning. Water quality sampling and testing of shoreline (beach) samples are currently being conducted, and our monitoring vessel traveled to both outfalls to make observations and take samples for analyses following regulatory permit protocols," read a statement from the plant.

Dafeta says all flows are being treated through its standard treatment process.

How much sewage was spilled?

Hyperion Plant says roughly 17 million gallons of raw sewage was spilled. This is roughly 6% of their daily load.

The plant is currently investigating the cause of the debris and repairs are being made to any damaged equipment.

Which beaches were closed?

The spillage caused the closure of local beaches before they were allowed to reopen Wednesday.

Prior to the news of reopening, the Los Angeles County Department of Public Health advised people to avoid contact with the ocean in the following areas:

Water samples were being tested. On Tuesday, Los Angeles County Health Officer Dr. Muntu Davis told the Board of Supervisors that initial tests showed non-hazardous levels of bacteria in the water. A second test was required within 24-hours before beaches were deemed safe to reopen.

The plant is the largest sewage treatment facility in the Los Angeles Metropolitan Area and one of the largest plants in the world.