The 133rd Tournament of Roses Parade made a colorful return to Colorado Boulevard in Pasadena today, with crowds lining the sidewalks to see dozens of elaborate floral floats, high-energy marching bands and equestrian teams in the iconic New Year's Day tradition that was called off last year due to COVID-19.

PASADENA, Calif. - The 133rd Tournament of Roses Parade made a colorful return to Colorado Boulevard in Pasadena Saturday, with crowds lining the sidewalks to see dozens of elaborate floral floats, high-energy marching bands and equestrian teams in the iconic New Year's Day tradition that was called off last year due to COVID-19.

"Dream. Believe. Achieve." was the parade theme this year, a celebration of "education's ability to open doors, open minds and change lives."

"Education paves the path to success with a world of opportunities achieved through knowledge, compassion and determination. Education is the great equalizer," Tournament of Roses Association President Robert Miller said. "As a community college educator, I have seen firsthand the life- changing miracle that education provides."

The UPS Store took top honors in the parade for the third consecutive time, winning the 2022 Sweepstakes Trophy for its entry "Rise, Shine & Read!' featuring a proud father rooster reading to his family of chicks on a 35-foot- tall, 55-foot-long animated float. 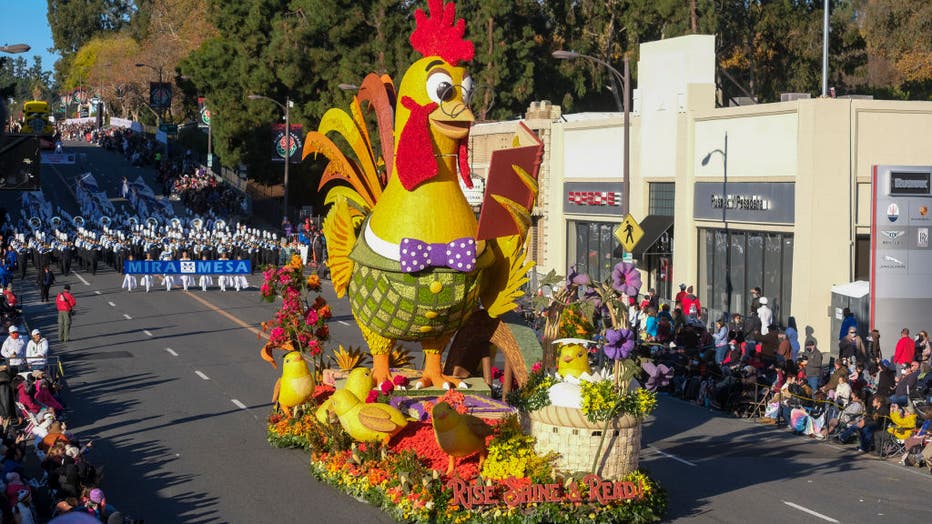 The UPS Stores float participates in the 133rd Rose Parade in Pasadena, California, January 1, 2022. - The parade features floral floats, marching bands and equestrian units to ring in the New Year along the 5.5 mile (8.8 km) route along Colorado Blv

The float, built by Irwindale-based Fiesta Parade Floats, demonstrated the importance of literacy.

The festivities began at 8 a.m. with a performance by Grammy-winning singer LeAnn Rimes, featuring a remixed and re-mastered version of "Throw My Arms Around the World," created specifically for the Pasadena celebration.

RELATED: Bands across the country honored to be part of Bandfest, Parade of Roses

Rimes, who first appeared in the Rose Parade in 2006, was accompanied by the Rose Parade Dancers, the Mark Keppel Dance Company, Rose Parade Flag Bearers and four drummers. A burst of fireworks set the stage for the two-hour parade.

Many spectators along the 5 1/2-mile parade route staked out their spots overnight despite unseasonably low temperatures. In 2019, the event drew an estimated 700,000 people in person, while 37 million people watched the television broadcast.

Some Rose Parade traditions remain unchanged since the first parade in 1890. That includes the requirement that every inch of the 37 floats must be covered with flowers or other natural materials, such as leaves, seeds or bark. The most delicate flowers, including roses, were placed in individual vials of water, set into floats one by one.

This year's grand marshal was Emmy-winning actor LeVar Burton, who is also a director, educator and lifelong advocate of children's literacy and known to generations of children for his role as host of PBS' "Reading Rainbow."

La Canada High School senior Nadia Chung reigned over the parade as Rose Queen, joined by the six members of her Royal Court:

The parade featured 17 marching bands. In a Rose Parade first that highlighted the theme of education, the Band Directors Marching Band included 270 band directors from across the United States and Mexico, ranging from recent music education graduates to retired veteran directors. 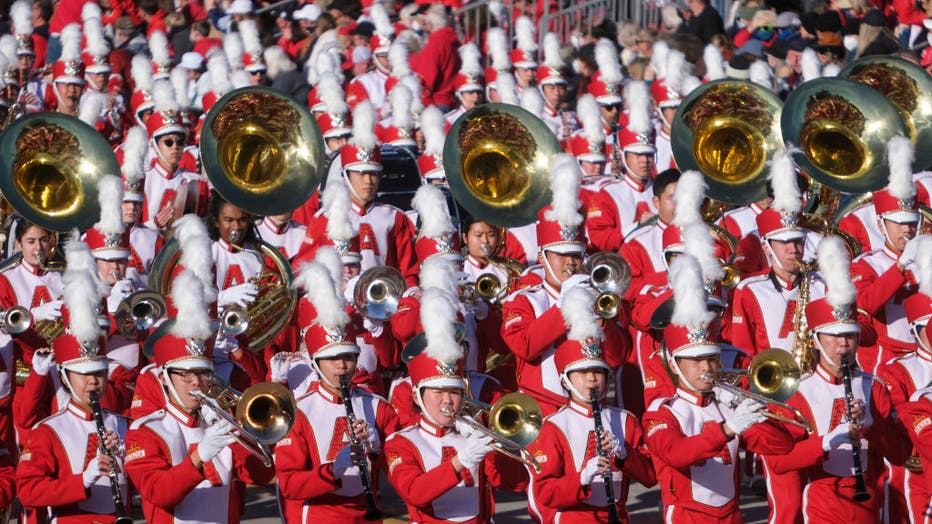 Seventeen equestrian teams on the parade route included The New Buffalo Soldiers, a group of first responders who present a historical representation of the 10th Regiment, Company H of the U.S. Cavalry, formerly enslaved individuals who served as soldiers but received little recognition for their sacrifice.

The Norco Cowgirls Rodeo Drill Team, an all-women, high-speed precision rodeo specialty act, were among the other groups that rode on horseback to entertain the crowd.

The parade wrapped with a grand finale headlined by Grammy nominee Jimmie Allen and an appearance by the Golden Knights, the U.S. Army Parachute team.

Allen made history as the first Black artist to launch a career with two consecutive No. 1 hits off his 2018 debut album, "Mercury Lane." His two- time platinum debut single "Best Shot" claimed the number one spot on country radio for three weeks.

At 2 p.m. Saturday, attention will shift to the 108th Rose Bowl, where Ohio State will take the field against Utah, in the latter team's first appearance in the New Year's Day game. 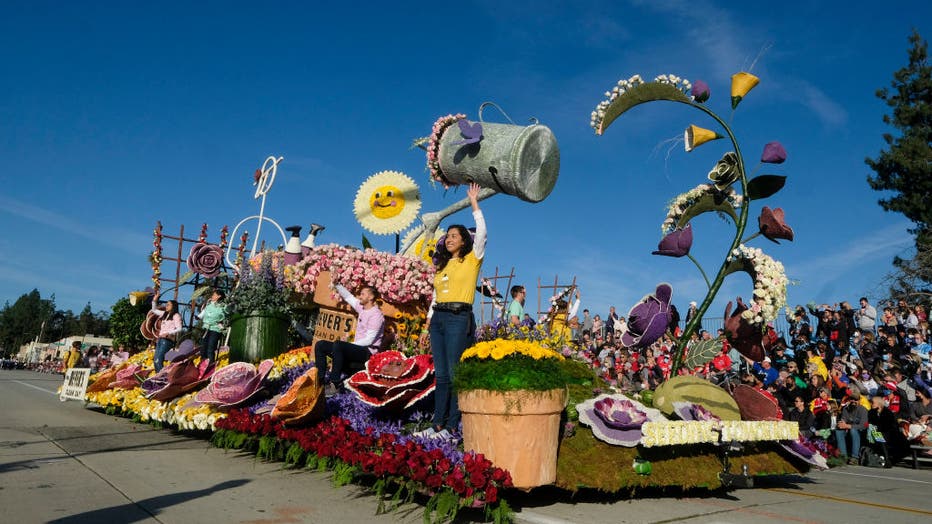 A float Seeding Tomorrow participates in the 133rd Rose Parade in Pasadena, California, January 1, 2022. - The parade features floral floats, marching bands and equestrian units to ring in the New Year along the 5.5 mile (8.8 km) route along Colorado

The two teams have matched up only once before -- in 1986, when OSU won 64-6 -- and some sports analysts say OSU's players may still be reeling from their bitter loss to rival Michigan.

Parade-watchers with tickets and football fans in the stadium were required to show proof of vaccination against COVID-19 or a negative result from a test for the virus. Those 18 and older also have to show a photo ID.

Masks were required to be worn throughout the parade.

The parade's floats will be on display at Floatfest after the parade and all day Sunday along a two-mile route at Sierra Madre and Washington boulevards. Visitors are advised to carry clear bags to get through security quickly. More details about restrictions can be found at tournamentofroses.com/events-calendar/floatfest/.