"Their neurologist, who has been recognized as a global leader in neurosurgery by the World Federation of Neurological Societies, has treated and been involved with tens of thousands of brain tumors in his career. It is his belief my wife and I may be the first documented case of spouses having an AN, both roughly the same size and on the same side of the head…according to him, the odds are maybe 1 in a BILLION," Lupiano said.

"To say he was concerned when he discovered all three of us grew up in the same neighborhood is an understatement. Why? There is one well documented cause of brain tumors – radiation exposure," he continued. 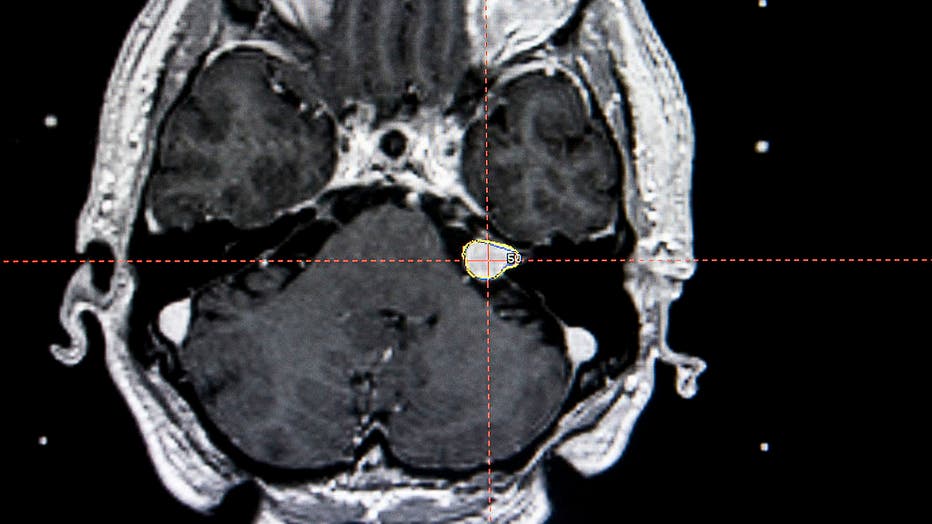 Lupiano eventually arrived at a single linking factor between himself, his wife and his sister: they each attended Colonia High School in Woodbridge in the 1990s. But Lupiano was not initially sure that the high school was a link to the similar yet rare brain cancer cases until he made a request on Facebook for others who attended Colonia to reach out to him personally.

By April 11, he had heard from more than 100 former Colonia High School attendees who had been diagnosed with rare cancers.

"[A]s of midnight Sunday 4/10, I recorded the 100th case of someone having a primary brain tumor," Luapiano said in an update on his Faceboook post. "I never in my worst nightmare envisioned ever hitting this milestone. That’s 100 people with their life forever changed. 100 families having to be told the terrible news. 100 stories of shock and disbelief with the diagnosis. I pray we find answers…(as of 18:00 4/11, the list stands at 102 individuals)."

RELATED: Bruce Willis 'stepping away' from acting as he battles aphasia

In an earlier update, Lupiano said many of those who reached out to him about their brain cancer cases "are former CHS teachers and staff members who didn’t live in Colonia, they just worked in the school."

Lupiano is an environmental scientist who tested ground samples for toxins over the course of his career and suggested that the school's grounds could be contaminated, according to NJ Spotlight News.

CAR-T cell therapy is not new, but a study published in the journal Nature found solid evidence that the treatment not only works quickly but appears to be a permanent cure for patients diagnosed with certain blood cancers, such as leukemia.

Woodbridge Mayor John McCormack told the outlet that his office initiated conversations with the Woodbridge Department of Health and Human Services, the Department of Environmental Protection and the Agency for Toxic Substance Disease Registry about opening investigations into potential radiation exposure stemming from the high school's campus. McCormack said the town wants local and federal involvement in the investigation.

Lupiano also suggested a potential link between Colonia High School and a Middlesex, New Jersey, sampling plant in his interview with NJ Spotlight.

The Middlesex Sampling Plant, which has since closed, is located on 9.6 acres, about a 30-minute driving from Colonia.

It "was an entry point for African uranium ores known as pitchblende" that were "imported for use in the nation’s early atomic energy program, were assayed at the Middlesex Sampling Plant and then shipped to other sites for processing," according to the U.S. Army Corps of Engineers (USACE) New York Division.

The plant received uranium, thorium and beryllium ores between the 1940s and 1967, which is the same year Colonia High School was built.

The plant then "decontaminated to the standards in effect at the time," though "overlooked during decontamination were traces of radioactive materials that had been carried offsite over the years by wind and rain to yards of neighboring homes," the USACE New York Division said on its website.

"Also, records later revealed that in 1948, some radioactively contaminated materials had been trucked from the plant to the Middlesex Municipal Landfill (MML), one-half mile away. In the 1980's, the contaminated residential properties were cleaned up, and the excavated soil was stored at the site in a specially constructed pile, known as the Vicinity Properties (VP) pile," the USACE New York Division's website states.

It is possible that soil from the plant had been trucked to Colonia High School during its construction in 1967, NJ Spotlight reported.