A bitter blast of arctic air will lead to dangerously cold conditions this week across the northern Rockies, central and northern Plains and the Upper Midwest, with temperatures dropping well below zero and wind chills reaching minus 50 to minus 60 degrees in some spots by the end of the week, according to the FOX Forecast Center.

Subfreezing temperatures will eventually reach as far south as the Gulf Coast as millions across the region will feel their coldest wintertime temperatures in several years. Dangerously cold temperatures will then spread into the Great Lakes and Northeast by the weekend, freezing areas in the wake of what's expected to be a crippling winter storm with blizzard conditions and the potential for widespread power outages. 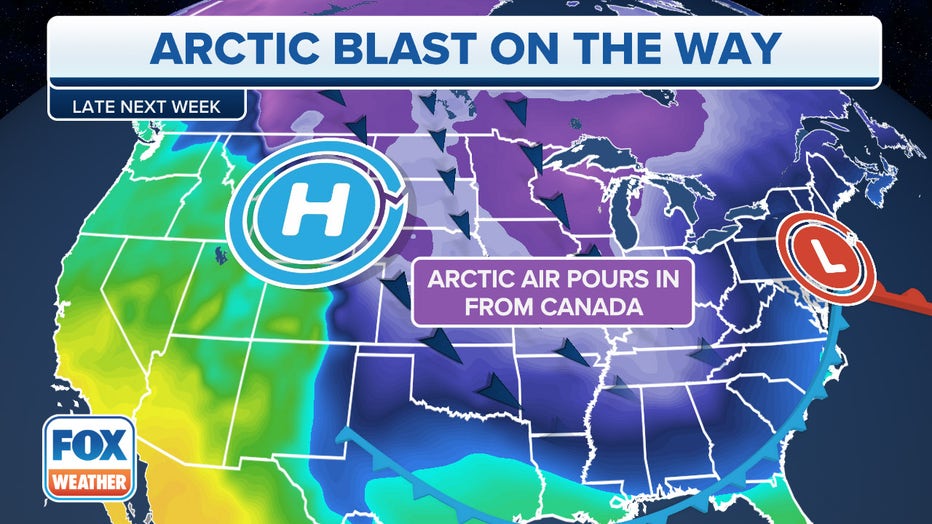 "High pressure parked over the Northwest Territories of Canada right now scoops up that cold air form the poles in the Arctic and then pushes it all the way down and into the Northern Rockies, Dakotas and Upper Midwest," said FOX Weather Meteorologist Steve Bender. "A developing low pressure center over the Great Lakes will then tap into that arctic air and accelerate it down into the Southern Plains."

Northern Plains may remain below zero for days

The arctic air began its week-long journey by surging south out of Canada over the weekend, and already low temperatures Monday morning were at least minus 20 or colder across northern Montana – Glasgow had a forecasted low temperature of minus 24 while minus 16 was expected in Great Falls. With the winds, wind chills were already around minus 35 to minus 40 degrees.

WHAT DOES THE WIND CHILL MEAN? 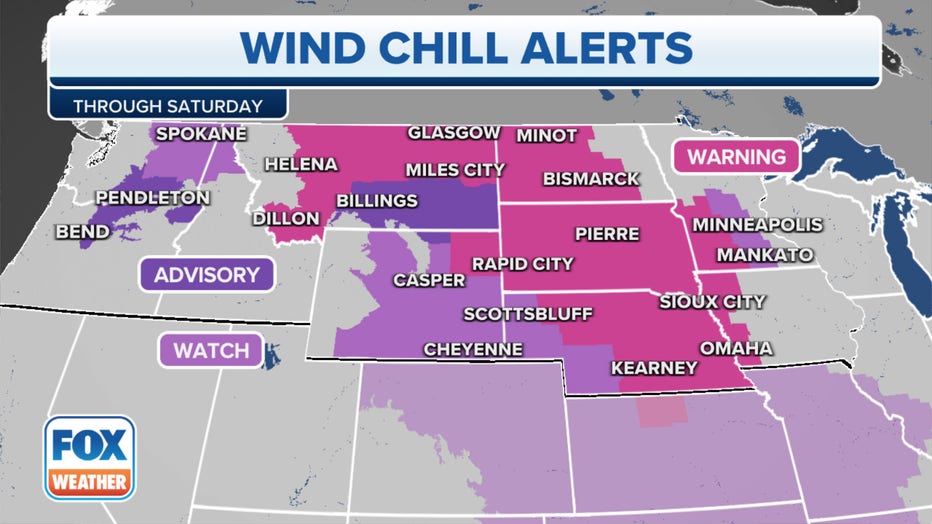 Forecast highs for Monday across the Northern Plains were barely in single digits across Montana, North Dakota and South Dakota – Bismarck fell below zero Saturday night and is still not expected to reach zero on Monday – or any day this week.

Bitterly cold temperatures will move south and east over the next few days. On Tuesday, some morning low temperature readings could approach minus 30 degrees across portions of Montana and North Dakota, with Bismarck hitting a low of minus 15, Pierre, South Dakota dropping to minus 10 – and even Minneapolis dropping below zero.

Denver will "only" drop into the mid-20s, but it'll feel warm compared to what's coming later in the week.

Wednesday morning will see temperatures drop below freezing across much of the Midwest, even stretching as far south as Texas. In the Northern Plains, freezing temperatures will be as far as 50 degrees away with temperatures approaching minus 20 or colder.  With temperatures that low, frostbite could emerge in as little as 10 minutes.

WHAT IS FROSTBITE? | WHAT IS HYPOTHERMIA?

It's not just the cold that comes with the arctic front, but a period of snow and gusty wind will spread across the Northern Plains Wednesday afternoon, reaching as far south as Oklahoma and as far east as Michigan by early Thursday. Winds will gust from 30 to 55 mph, making travel hazardous from Kansas to Wisconsin.

Wind chills drop as low as minus 60 on Thursday

By Thursday morning, much of the heartland is within the full icy grips of the arctic blast while heavy snows will begin to bury the Great Lakes region.

Morning temperatures will be as cold as minus 30 in Casper, Wyoming, with minus 22 likely in Billings, Montana. But subzero temperatures will spread far to the south, with a morning low of minus 12 forecast for Denver, minus 10 in Omaha, Nebraska, and even minus3 in Salina, Kansas.

Even the inland Pacific Northwest will feel the edge of the arctic blast, with lows in Boise dropping to around 5 degrees and morning temperatures around minus 10 degrees in Spokane, Washington.

But as cold as those temperatures seem, the wind chills will border on the absurd for much of the Northern Plains and Upper Midwest. 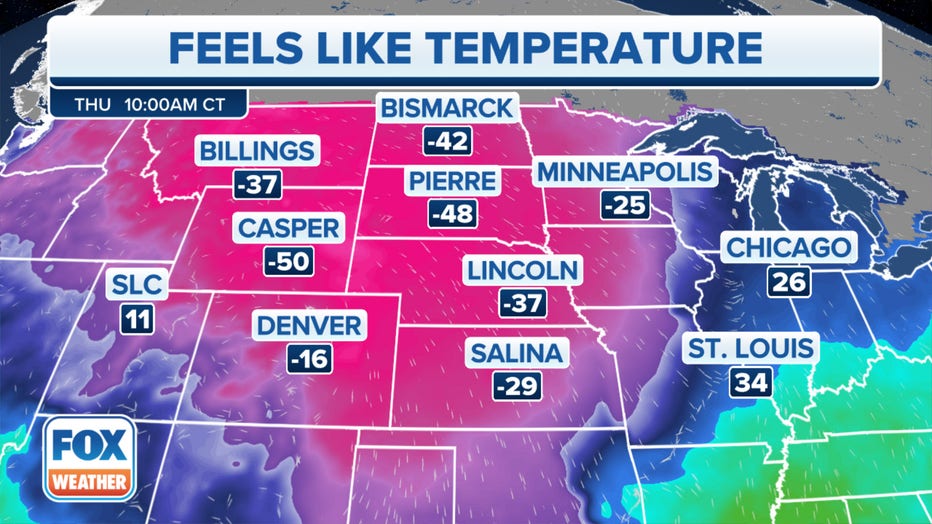 South goes into the Deep Freeze

After spending days freezing the Midwest, the bitter blast of cold air will surge south and east Thursday into Friday. That will send temperatures tumbling from the southern Plains to the Southeast.

Morning low temperatures Friday morning are expected in the teens and single digits as far south as Oklahoma, Arkansas and Tennessee, according to the FOX Forecast Center, while temperatures will remain in the teens from central Texas to Georgia. Dallas-Fort Worth Airport may dip below 10 degrees Friday.

"Areas like Oklahoma, Arkansas, northern Texas and northern Louisiana, and the Mississippi Delta, you have to prepared for the cold as well as potential power outages as the wind gusts will be quite strong along with the potential for a freeze," Bender said.

The chill will likely be some of the coldest readings in at least five years for many areas east of the Mississippi River, and Wind Chill Advisories may be needed all the way to the Gulf Coast. 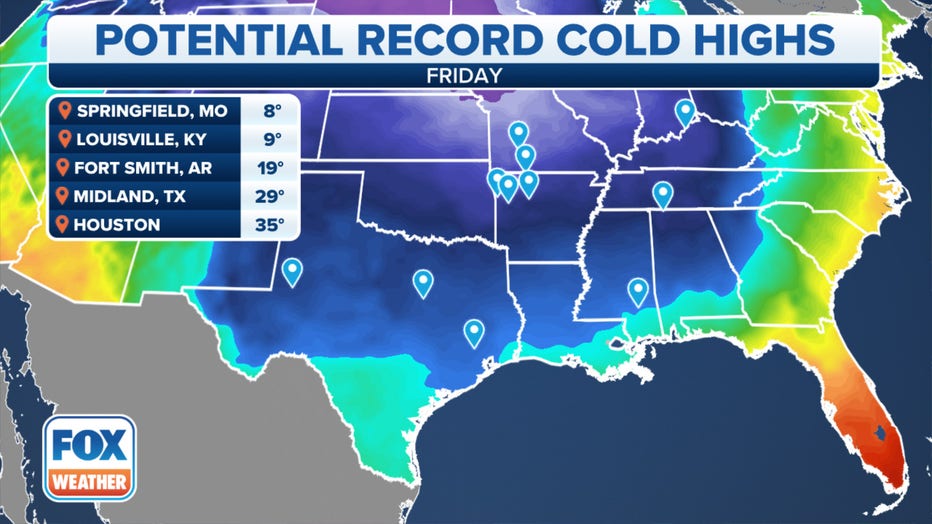 Several locations across the South may not get out of the teens or 20s on Friday, setting records for lowest maximum temperatures.

The arctic air even reaches into Florida by Christmas weekend, with lows in the 30s and highs only in the 50s in Orlando.

According to the FOX Forecast Center, widespread 60-plus-mph wind gusts are likely around the Great Lakes region, and there is the potential for gusts even reaching as high as 80 mph as the arctic cold front passes through the Northeast on Friday or Friday night, which would likely lead to tree damage and cause numerous power outages. 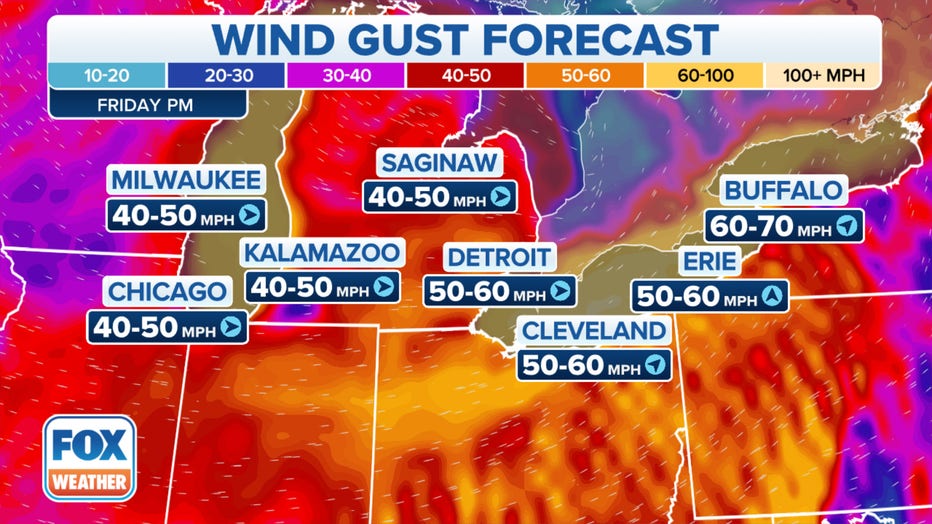 WHAT MAKES A BLIZZARD DIFFERENT FROM AN ORDINARY SNOWSTORM?

This would be a dangerous situation with the bitterly cold temperatures and wind chills arriving Friday night and continuing through Christmas weekend.

High temperatures Saturday are forecast to only reach single digits to teens across the Great Lakes area with teens and 20s expected in the Interior Northeast.

LINK: GET UPDATES ON THIS FORECAST FROM FOXWEATHER.COM