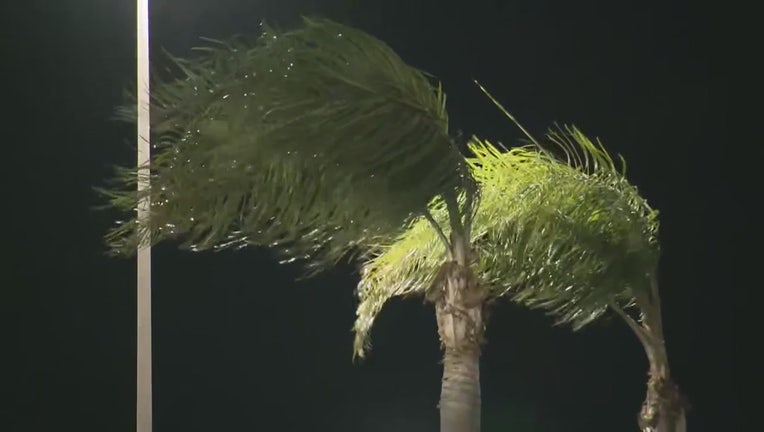 The strongest winds are expected in the San Gabriel Mountains and the Santa Monica Mountains Recreational area. North-to-northeast winds of between 25 and 40 miles per hour have been blowing in both areas, and gusts of up to 70 mph are expected Tuesday morning, forecasters said.

A high wind warning will be in effect in both mountain regions until 10 p.m., and a less serious wind advisory will be effect at the same time in the Santa Clarita and San Fernando valleys but in force only until 3 p.m. along the coast, in metropolitan Los Angeles, Downtown L.A. and the Hollywood Hills.

The weather service urged residents to avoid being outside in forested areas and around trees and branches as strong winds whip across mountain areas.

Outside mountain regions, L.A. County's strongest winds were expected in the Santa Clarita Valley, where the forecast was for northeast winds of 25 to 35 mph and gusts of up to 55 mph through this evening, with isolated gusts of 60 mph expected in foothill canyons and passes.

Slightly weaker northeast winds -- 20-35 mph with 40-mph gusts -- are forecast for the San Fernando Valley, while Los Angeles and the coast experience winds of 15-25 mph and gusts of 40 mph.

The wind advisory was also in effect until 10 p.m. in Orange County, where the wind was expected to blow at between 15 and 30 mph, accompanied by gusts of up to 50 mph.

Several highways will be affected by the wind in the mountains and at lower elevations, including in Orange County, warned the NWS, specifically citing the Antelope Valley (14) Freeway, Interstate 5, and the 101, 118, 5, 210, 10 and 405 freeways.