DOHA, Qatar - Croatia and Morocco advanced to the last 16 of the World Cup on Thursday. Meanwhile, Germany was eliminated from the group stage for the second tournament in a row.

The four-time champions beat Costa Rica 4-2 Thursday but it wasn't enough to advance to the round of 16. Japan's 2-1 victory over Spain allowed both of those teams to advance instead, with the Japanese team at the top of the group.

Playing as defending champions at the last World Cup, Germany also was knocked out in the group stage.

Germany, which lost to Japan in its opening match in Qatar, needed help from the other match in order to advance with a victory at Al Bayt Stadium, but things didn't go its way. If Spain had beaten Japan, the Germans would have finished second in the group.

For Mexico, World Cup heartache and four years of regret

Germany had the same struggles in Russia in 2018 after opening with a 1-0 loss to Mexico before beating Sweden 2-1. Germany would have advanced with a win over South Korea in the final group game, but the defending champions lost 2-0 and went home.

"Now we have to do it differently," Müller said. "When the football world looks at Germany versus Costa Rica, I think we’re the favorite for those looking from the outside. It’s clear we have to win. Naturally we have respect." 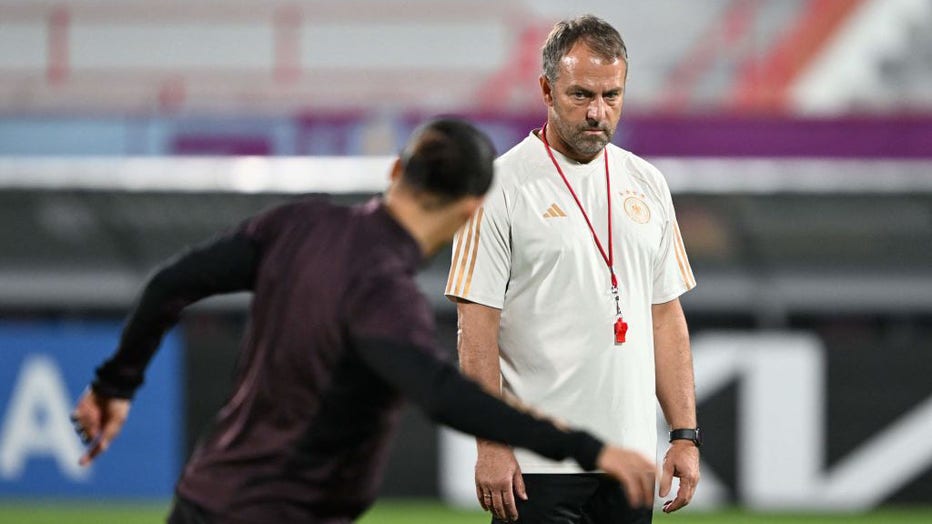 Germany's coach Hans-Dieter Flick leads a training session at the Al Shamal Stadium in Al Shamal, north of Doha on Nov. 30, 2022, on the eve of the Qatar 2022 World Cup football match between Costa Rica and Germany. (Photo by INA FASSBENDER/AFP via G

Costa Rica earned a surprise win over Japan last week and now control its own fate. Costa Rica will advance with a victory over Germany, and even a draw would be enough for Costa Rica to reach the knockout stages if Spain beats Japan in the group’s other game being played at the same time.

"We didn’t come to sit around and take pictures of Qatar," Costa Rica coach Luis Fernando Suárez said before the tournament.

After beating Germany 2-1 in its opener, Japan found its way into the round of 16 of the World Cup by defeating Spain by the same score in its last group game Thursday.

Spain also advanced despite the loss.

Japan scored twice early in the second half to come from behind and defeat another European powerhouse and make it to the knockout stage for the second straight time. It was the first time Japan has advanced past the group stage in back-to-back tournaments.

Ao Tanaka scored the winning goal from close range early in the second half. It took about two minutes for video review officials to confirm the ball hadn’t gone out of bounds before the goal that gave Japan the win at Khalifa International Stadium, which is where Japan had shocked Germany in its opener.

Japan finished at the top of Group E to set up a last-16 matchup against Croatia. Spain finished second and will take on Morocco.

Spain and Germany — which beat Costa Rica 4-2 — both had three points in the group. But Spain had a superior goal difference from its first group match so Germany was eliminated.

The group standings bounced back and forth during both matches. Costa Rica was beating Germany at one point. If that result had stood, Costa Rica would have eliminated Spain.

Álvaro Morata scored first for Spain in the 11th minute and Spain was in control until Japan rallied after halftime. Ritsu Doan equalized in the 48th with a left-footed shot from outside the box, and Tanaka added the second three minutes later.

Morata became the first player to score in the first three Spain matches at the World Cup since Telmo Zarra in 1950.

Spain had opened with a 7-0 rout of Costa Rica before conceding late in a 1-1 draw against Germany.

Japan was eliminated by Belgium in the last 16 in Russia. It has never gone past the round of 16 at World Cups.

Croatia advanced to the last 16 of the World Cup on Thursday after a 0-0 draw against Belgium, whose group-stage exit will likely usher in the breakup of its talented but underachieving generation of players.

The eastern European nation has reached at least the semifinals on each of the two times it has reached the knockout stage.

Belgium was eliminated after scoring one goal in three games and failed to live up to its status as the second-ranked team and one of the tournament favorites.

Needing a win to be sure of advancing, Belgium produced its best performance of the World Cup and wasted two clear chances that fell to Romelu Lukaku. The halftime substitute struck a shot against the post and failed to control a ball that bounced off his chest.

What has long been called Belgium's "Golden Generation" — now featuring six players with more than 100 appearances — is set to split up with a World Cup semifinal appearance in 2018 as its peak.

World Cup: Antonee Robinson breaks down in tears in locker room after emotional win over Iran

Morocco advanced to the last 16 at the World Cup for just the second time after clinging on for a 2-1 win over Canada on Thursday.

The Moroccans' only other trip past the group stage came in 1986.

Hakim Ziyech scored for Morocco in the fourth minute after a bad error by Canada goalkeeper Milan Borjan left the winger to shoot the ball into an empty goal. Youssef En-Nesyri added a second in the 23rd.

It looked then like Morocco would overrun the Canadians.

But Nayef Aguerd's own-goal just before halftime made it 2-1 and lifted Canada enough for them to put pressure on Morocco in search of an equalizing goal for most of the second half.

Canada came agonizingly close when a header from captain Atiba Hutchinson, who came on as a second-half substitute, bounced off the crossbar and onto the goal-line.

A draw would also have been enough for Morocco to advance.

Canada, which will co-host the next World Cup in 2026 with the United States and Mexico, ultimately lost all three of its games in Qatar, matching its three defeats at its only other World Cup appearance in 1986.