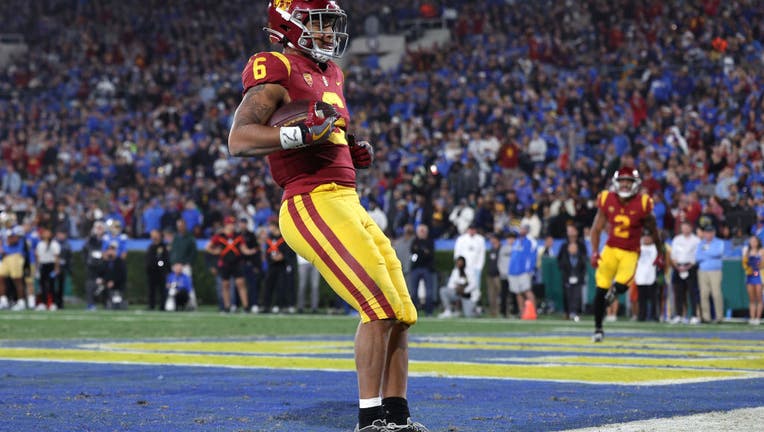 Austin Jones #6 of the USC Trojans celebrates after scoring a touchdown against the UCLA Bruins. (Photo by Harry How/Getty Images)

PASADENA, Calif. - Caleb Williams passed for a career-high 470 yards, Austin Jones rushed for a season-high 120 yards and seventh-ranked Southern California clinched a spot on the Pac-12 Championship game with a 48-45 victory over No. 16 UCLA on Saturday night.

Williams completed 32 of 43 passes with two touchdowns and an interception. His favorite target was Jordan Addison, who had 11 receptions for 178 yards and a touchdown.

USC fell behind 14-0 before rallying. The Trojans scored on eight of nine drives, including five straight.

Dorian Thompson-Robinson accounted for all six UCLA touchdowns, but also had three interceptions and a fumble.

SUGGESTED: Cody Bellinger out? Former NL MVP now a free agent after being non-tendered by Dodgers

UCLA got the ball with 2:21 remaining after forcing USC to punt. The Bruins (8-3, 5-3) got to midfield but their hopes of a comeback evaporated when Thompson-Robinson was picked off by Korey Foreman at midfield with 1:26 remaining.

Thompson-Robinson was 23 of 38 for 309 yards and passed for four touchdowns. He also rushed for 75 yards and two scores.

After Jones’ 8-yard run brought the Trojans within 21-17, UCLA got the ball and was looking to get one last score before halftime — along with getting the ball at the start of the second half.

Things didn’t go according to plan.

Thompson-Robinson was picked off by Mekhi Blackmon, who returned it to the UCLA 35. USC’s Denis Lynch missed his second field goal.

The Bruins got the ball back but Shane Lee intercepted Thompson-Robinson at the UCLA 47 with 14 seconds remaining. USC was able to convert this time as Lynch connected from 49 yards to get the Trojans within 21-20 at halftime.

Nicholas Barr-Mira’s 46-yard field goal on the opening drive of the second half extended the Bruins’ lead to four before Williams connected with Addison for a 35-yard TD to put the Trojans on top 27-24.

USC’s defense came up with its third turnover midway through the third quarter when Tyrone Taleni sacked Thompson-Robinson and forced a fumble, which was recovered by Latrell McCutchin at the UCLA 9. Two plays later, Jones scored up the middle from 2 yards to extend the Trojans’ lead to double digits.