The United States is looking forward to hearing "The Star-Spangled Banner" played throughout Tokyo in this summer’s Olympic games.

Team USA has long dominated the podium, tallying more than 2,523 medals — most of any country in the history of the summer games. More than 1,000 of those are gold, more than 700 are silver and another 700 are bronze. 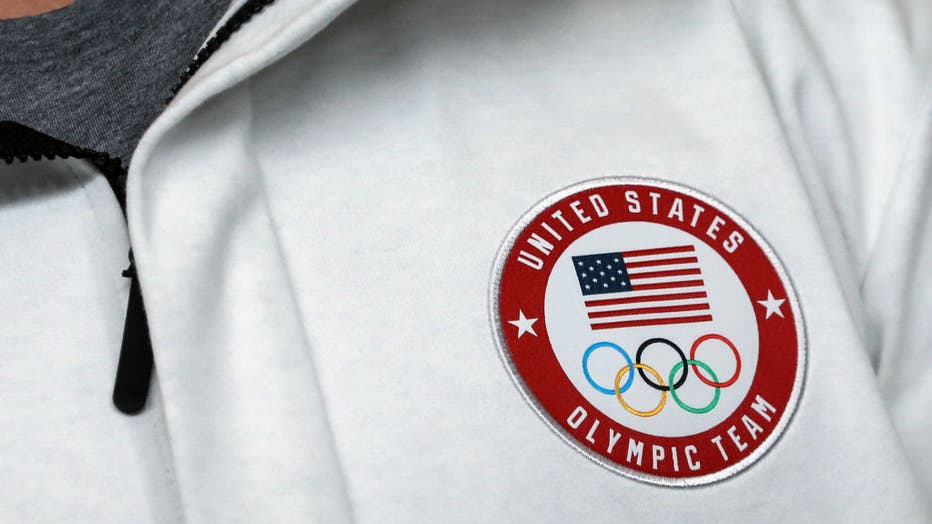 A picture taken on Feb. 8, 2018, shows the logo of U.S. Olympic team on an athlete's sweater ahead of the Pyeongchang 2018 Winter Olympic Games in Pyeongchang. (Photo credit should read FLORIAN CHOBLET/AFP via Getty Images)

This year’s Olympic team, comprised of familiar faces and some newcomers, will try to add to that total. Here’s who to watch at the Tokyo Olympics:

In the 2016 game in Rio de Janeiro, Brazil, the gymnast won gold in the team event and the all-around, vault and floor exercise. She took the bronze medal in the balance beam event.

Since that time, she’s dazzled the gymnastics world with never-before-seen moves that now bear her name. Biles is trying to be the first all-around champion to repeat since Vera Caslavska in 1968.

Felix has been a vital part of Team USA since she first circled the track at the 2004 Olympic Games in Athens, Greece.

Her decorated career includes six gold medals and three silvers. One more medal would make the 35-year-old the most decorated female track athlete in Olympic history.

Since the 2016 Olympics, Felix gave birth to a daughter. She became an outspoken champion of maternal protections in contracts after coming into conflict with Nike due to her pregnancy.

Male sprinters are looking to claim the throne vacated by Jamaica’s Usain Bolt, who retired after the 2016 Olympics.

Bromell, who was plagued by injuries from 2016-19, is one of the favorites to take the 100-meter title. He won that race at this year’s Olympic trials.

Lyles is expected to take the 200-meter Olympic title — another event Bolt used to dominate. Lyles placed himself at the front of the pack as the reigning world champion at that distance.

The gifted long-distance swimmer dominated the 2016 Olympics with five gold medals, often leaving her competitors far behind. She’s favored to win the 200, 400, 800, and the new 1,500-meter freestyle events.

She’ll also be the flag bearer during the parade of nations in the opening ceremony.

While Ledecky dominates in longer distances, Manuel takes her glory in shorter swims.

Manuel became the first African-American woman to win an Olympic gold medal in an individual swimming event in 2016 when she won the 100-meter freestyle.

She didn’t qualify for the event this year, but she will be swimming in the 50-meter freestyle.

Michael Phelps was to men’s swimming what Bolt was to male sprinters. And now that Phelps is retired, there’s a big vacancy on Team USA’s men’s swimming team.

Dressel is hoping to fill the void. The 24-year-old already holds two Olympic gold medals in the pool and is the world record holder in the 100-meter butterfly.

He’s competing in that event as well as the 50 and 100-meter freestyle races.

For the first time, skateboarding is an Olympic sport and Team USA is sending a decorated skater to compete for gold.

Huston has won three of the last four world titles in the street category and boasts the most street medals in the history of X Games.

The U.S. Women’s National Team has dominated international soccer competitions for decades, but they had a disappointing finish in the 2016 Olympics. The squad that won four gold medals and one silver medal finished in fifth place in Rio de Janeiro.

The team is bolstered by stars like Megan Rapinoe, Carli Lloyd, Alex Morgan and Rose Lavelle.

The U.S. Men’s Basketball Team’s resume speaks for itself, boasting 15 Olympic gold medals and only five Olympic losses dating back to the 1936 Berlin Games. The men’s team has not lost an Olympic game since the 2004 games in Athens.

But their quest for a fourth straight gold medal has gotten off to a rocky start. In an exhibition game, the Americans lost to Nigeria and Australia just days before the Tokyo games. And coming in seventh place in the 2019 FIBA World Cup also does little to inspire confidence in this year’s squad.

Even so, the American men are heavily favored to win the gold for a fourth straight time — a feat last accomplished when USA reeled off seven gold medals in a row between 1936 and 1968.

For the first time since 2004, the men’s team will be without Carmelo Anthony, whose four medals (three gold and one bronze) are the most of anyone in the history of the men’s squad.

Even so, the team has filled its ranks with NBA all stars like Kevin Durant, Damian Lillard, Jayson Tatum, Draymond Green and Devin Booker.

Booker will be a late addition to the team while the Pheonix Suns compete for an NBA title. Durant will be the flag bearer during Tokyo’s closing ceremony.

For as good as the men’s team has been, the U.S. Women’s Basketball Team has been just as dominant.

Their history doesn’t date as far back as their male counterparts, but the American women have earned eight Olympic gold medals and only lost three games in Olympic competition. Their last loss came in Barcelona in the 1992 Summer Olympics.

Winning the gold in Tokyo would mean a seventh straight for the women’s squad. Veterans Diana Taurasi and Sue Bird are competing in their fifth Olympics and are hoping to be the first basketball players of any gender to win the gold five times.