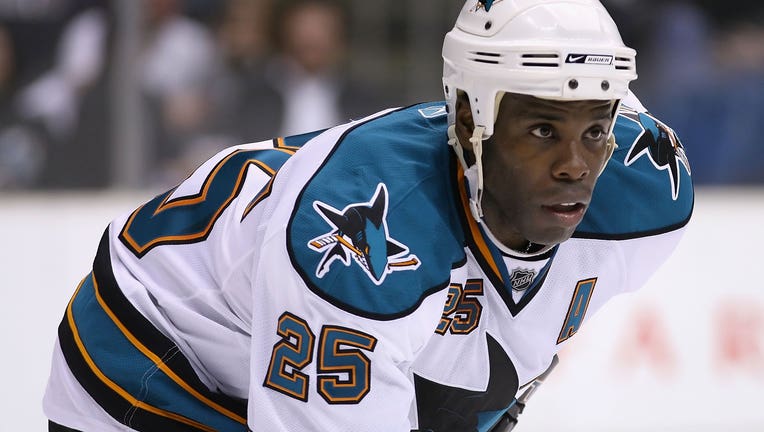 LOS ANGELES, CA - DECEMBER 15: Mike Grier #25 of the San Jose Sharks skates up the a face off during the NHL game against the Los Angeles Kings at Staples Center on December 15, 2008 in Los Angeles, California. The Sharks defeated the Kings 3-2 in ov

SAN JOSE, Calif. - Since the National Hockey League was first established in 1917 there has never been a Black general manager of any team.

On Tuesday, the San Jose Sharks broke a glass ceiling that has existed in the league for more than 100 years by naming Mike Grier as general manager.

During a news conference on Tuesday where Grier was introduced to the public, the historic nature of his role did not even come up until 20 minutes into the event.

Grier is no stranger to San Jose where he spent three seasons with the team, from 2006 to 2009, as a right-wing. Most recently he was an executive with the New York Rangers.

"My job is to do the best I can for the San Jose Sharks organization and if I do that hopefully it opens the door to give other opportunities to other minorities to get into front office positions and maybe lead a team down the road as well," Grier said.

Grier comes from a family with experience in leadership roles. His older brother, Chris, is the general manager of the NFL’s Miami Dolphins. Their father was a long-time New England Patriots executive.

The president of the Sharks, Jonathan Becher, made it clear there’s only one reason Mike Grier was hired.

"We hired the best general manager available. Mike just happens to be Black. The focus was on finding the best candidate for the job," Becher said.

'Is that the Stanley Cup?' Iconic trophy accidentally delivered to wrong house

Sharks executives said Grier’s former teammates had nothing but good things to say about him during the search process including legend Patrick Marleau who attended the announcement.

"I don’t think you can find a better guy to take the reins here and steer this organization in the right direction going forward," Marleau said.

From SAP Center, Mike Grier and other executives are heading to Montreal for the NHL draft later this week. Grier also said he has no specific timeline in which he plans to select a new head coach.