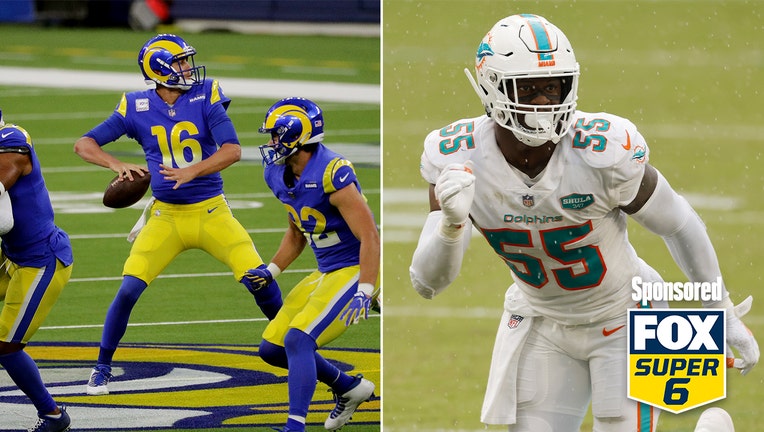 For the second week in a row, Terry Bradshaw’s million dollars went unclaimed. And yet, it’s still there for you to take right out of the Hall of Famers pocket.

That’s right, the FOX Super 6 jackpot rolls over the $1 million grand prize to Week 8 of the National Football League season after nobody picked all six winners of NFL games.

Here’s the six games to pick for this coming week:

Fresh off a Monday night win over the Bears at home, the Rams travel cross-country for the fourth time this year – Philadelphia, Washington and Buffalo- to face a Dolphins team that will see Tua Tagovailoa at quarterback for the first time as the starter, replacing Ryan Fitzpatrick. Jared Goff has been outstanding for the Rams, throwing 12 touchdown passes and just four interceptions while posting a 102.4 quarterback rating.

Will the Rams keep place in the NFC West or will the Dolphins come closer in the AFC East? Make your pick on the FOX Super 6 for free and it could lead to $1 million.

Minnesota are coming off a bye week following an embarrassing 40-23 loss to the Falcons at home on Oct. 18. It’s a long way from the opening day game between these two teams which the Packers won 43-34 thanks to 364 yards and four touchdown passes from Aaron Rodgers. Rodgers bounced back from a subpar outing in Tampa Bay to post big numbers last week in a 35-20 win at Houston. Davante Adams was huge, catching 13 passes for 196 yards and two touchdowns against the Texans.

A pivot week for both teams. The Browns are coming off a riveting win over Cincinnati last week, but lost Odell Beckham Jr. for the season with a torn ACL. With the Steelers/Ravens playing one another, it’s a chance for the Browns to draw closer. Meanwhile, the Raiders momentum from beating the Chiefs before the bye week faded with a loss at home to Tampa Bay.

The Steelers are 6-0 for the first time since 1978, but could fall into a tie for first place in the AFC North if they fall in Baltimore. Pittsburgh’s offense has been remarkably versatile with Chase Claypool, James Connor, Juju Smith-Schuster and Ben Roethlisberger all appearing in top form. The Ravens are coming off a bye week, but are given an opportunity to bounce in a marquee spot from their Sept. 28 thrashing at home to the Chiefs.

It’s getting late early for the Patriots, who suffered the worst home loss of the Bill Belichick era on Sunday against the 49ers. Cam Newton will start at quarterback, but his poor performance on Sunday has opened the door to a possible change if the performance doesn’t improve. Meanwhile, the Bills snapped a two-game losing streak by beating the Jets last week. Josh Allen has broken the 2,000 yard passing mark already with 16 touchdowns and just four interceptions.

A possible playoff preview in the NFC sees New Orleans travel to the Windy City to catch the Bears on a short week after the loss on Monday night to the Rams. While the natural matchup to watch is the quarterbacks – Drew Brees and Nick Foles both went to Westlake High School in Austin, Tx.- keep an eye on both teams primary running backs in Alvin Kamara (Saints) and David Montgomery (Bears). The team that wins this game likely are able to establish a running game.

It’s a big game for both teams and it could be a huge game for you on the FOX Super 6 app. If you pick that game and the five others correctly, you could win $1 million. It’s free to play, so download today at the App Store or Google Play.